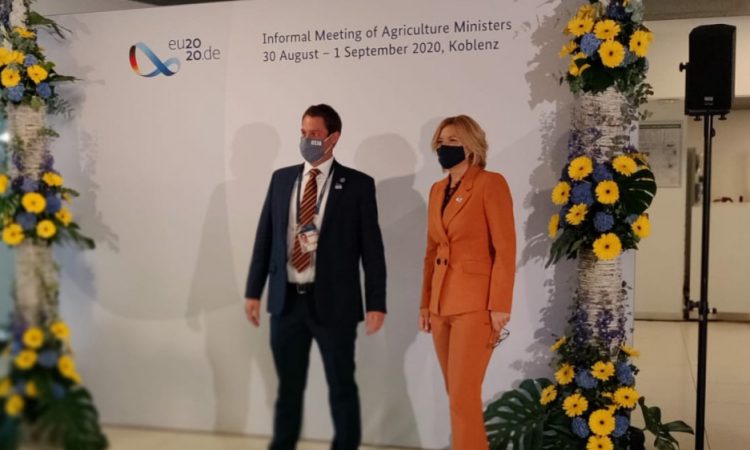 EU agriculture ministers were addressed by CEJA president Jannes Maes during the informal AGRIFISH meeting in Koblenz, Germany, on the subjects of food chain resilience, labelling and animal welfare.

Speaking to them today (Tuesday, September 1), the EU young farmers’ group president highlighted the importance of a flexible and coherent policy framework.

At a time when the Covid-19 crisis together with investment gap created in the agriculture sector and other systemic difficulties put significant pressure on the shoulders of young farmers, already faced with high risks, Maes underlined the necessity to build up further resilience.

Maes stressed to the ministers the need for a strong palette of flexible instruments to prevent, react and adapt to market and weather fluctuations so that young farmers can deliver food security and environmental performance, including in times of crisis.

“It is important that funding the promotion of local economies does not come at the expense of today’s diversity of selling channels.

“Short food supply chains, while valuable, should not be considered as the unique pathway for creating value,” said Maes.

On the topic of labelling, the president highlighted:

Labelling is about empowering consumers in their choices while recognising the exceptional features of traditional food and the value of European cuisine.

He called for “a positive, science-based and non-discriminatory labelling methodology”.

Concerning animal welfare, Maes said: “As European young farmers, we are well aware that the coming decades will bring further change in that relationship.”

To move forward on this topic, “further knowledge sharing and investment capacity at farm level are crucial”, he added.

The resilience of the European agriculture, as well as its ability to provide further transparency to consumers and guarantee high levels of animal welfare, will strongly depend on the future National Strategic Plans (NSPs), he stressed.

In this perspective, it is crucial that young farmers are involved in the NSPs definition process and that their concerns are taken into account, the president concluded.