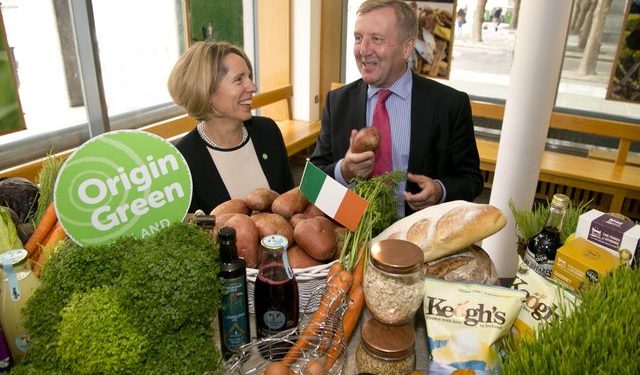 Tara McCarthy, CEO of Bord Bia, with the Minister for Agriculture Food and the Marine, Michael Creed

Bord Bia has received a funding boost to the tune of €6.745 million to develop export opportunities for food, drink and horticulture companies and producers.

The additional funding will allow Bord Bia to undertake a programme of additional activities to support the food and drink sectors in addressing the market challenges relating to Brexit, according to the Minister for Agriculture, Food and the Marine, Michael Creed.

The funding is in addition to the €1.6 million provided to Bord Bia in Autumn 2016 for grants to assist food companies highly dependent on the UK market and the €2 million already provided to Bord Bia this year for increased expenditure on programmes, the department explained.

This programme of activities draws on analysis of data from the Bord Bia Brexit Barometer exercise which was completed by 139 food, drink and horticulture companies, Minister Creed said.

It also follows his request to Bord Bia to undertake a major market prioritisation exercise to identify the best prospects for sustainable growth in individual sectors, he added.

The programme is wide-ranging, well thought through and ambitious.

“It is, in my view, an appropriate element of our response to the marketing challenges presented by Brexit in terms of business development and diversification,” he said.

Minister Creed explained that of the €6.7 million funding boost for Bord Bia, a total of €4.4 million will be allocated towards market promotion and supports in international, UK and other EU markets.

A further €1.6 million will be used to strengthen strategic marketing processes. An additional €300,000 has been designated for market prioritisation, while €400,000 in funding has been pigeonholed for a 2-year MSc degree in Insight and Innovation in NUI Maynooth – which was recently launched by Bord Bia.

In November, Minister Creed will be leading a trade mission to Japan and the Republic of Korea. This follows trade missions in the past year to China, Singapore, North Africa, the Gulf States, the US and Mexico.

“Minister [Andrew] Doyle has also led a trade mission to Vietnam and the Republic of Korea. My department has built its international presence and now has attaches based in countries both within and outside the EU – including Washington, Beijing and Abu Dhabi.

“My department works very closely with the Irish embassy network and with Bord Bia – who also have officers in locations around the world, with the most recent offices opened in Singapore and Warsaw,” Minister Creed concluded.

Ireland will not ‘wave the white flag’ on UK access