Grimme has launched what it describes as “its biggest ever self-propelled potato harvester” onto the market.

With no less than 530hp at its disposal (courtesy of a Mercedes engine), the four-row Ventor 4150 comes with a capacious 15t hopper (bunker).

According to Grimme, the crucial element of this machine is the integration of the existing “SE principle” into this new harvester. The SE separation system is currently used on the company’s one-row and two-row trailed (bunker-type) machines.

The SE system consists of “special”, multi-level conveying, lifting and sieving webs. It also incorporates a “wide-meshed” de-vining web and an inspection platform (enabling “clean” crop to be harvested, without even the need for a haulm topper up front).

The system has not – heretofore – been fitted to Grimme’s four-row harvesters, due to “technological barriers”. 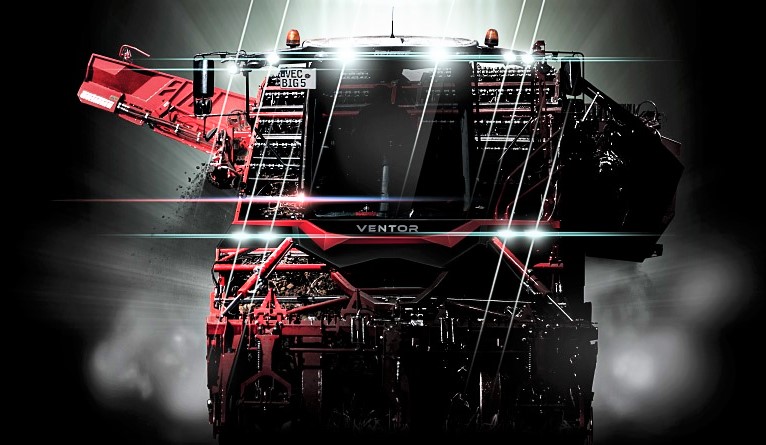 In the case of the new self-propelled Ventor, Grimme has effectively combined two twin-row SE systems to form a new four-row harvester. The whole rig still manages to remain within a 3.5m “road” width, thanks to the way in which the machine folds up for transport.

Advertisement
Up front, the Ventor 4150 has no wheels ahead of the intake unit. This, claims Grimme, reduces crop compaction and damage. It enables digging “straight away”, even when opening a new field.

Further back, ‘Speedtronic’ automatically adjusts the speed of the separating system, lightening the operator’s workload. After passing through the separators, potatoes can be inspected by up to three people on the inspection platform. The remaining crop then passes through, eventually ending up in the 15t bunker.

The four-wheel steer machine features a ‘crab steering’ mode; enabling each wheel to travel on “fresh” ground during each run – to minimise rutting. Floatation tyres (900/70 R32s on the front; 900/60 R38s at the rear) are standard.

With a claimed inner turning circle of 6.1m, Grimme says that the Ventor is more manoeuvrable than any tractor / trailed harvester combination.

The Ventor sports a new digital ProCam video surveillance system; it consists of two “high-quality, wide-lens” cameras, as well as a “high-resolution” monitor with a split-screen function.

Despite the size of the machine, says Grimme, ProCam gives the driver an “unobscured 360° view, with practically no blind-spots”.

The Ventor 4150 will make its debut at the upcoming Agritechnica machinery show in Germany. It will be available for the 2018 season.

World's largest machinery exhibition: Should you be there?

Milk Price Tracker: Prices on up in some co-ops