€350 UK/Irish beef price gap returns, so where are the protests? 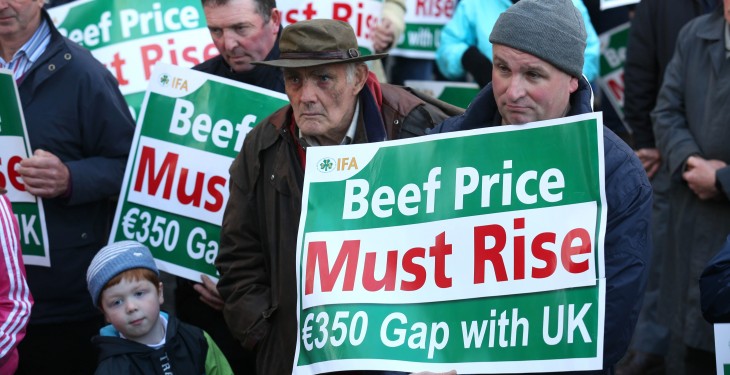 Last autumn, Irish farmers, led by the IFA, went out and protested twice – in October and November – over what the IFA deemed a beef crisis. Irish beef was making €3.73/kg at the time.

One of the key issues which drove IFA members to factory gates last autumn was what they saw as the unfairness of what was not an insignificant €350 beef price gap with the UK beef prices at the time.

Beef prices in Britain for R grade steers were running at the equivalent of €4.70/kg incl vat, which was almost €1/kg higher than the €3.73/kg Irish price.

He said Irish beef prices at the factories had to rise to fairly reflect the very strong increase in UK cattle prices.

So, if benchmarking the price of Irish beef against those across the water was a good enough reason to protest at factory gates last autumn, then it begs the question as to why farmers are not gathered outside those gates today with a similar, if not greater, price gap still apparent?

The week in the lead up to Christmas, after the beef protest, saw Irish beef prices rise considerably. However much of the rise can be attributed, without doubt, to the significant devaluation in the value of the euro against sterling.

And, while deadweight prices here increased in euro terms the weakening of the euro over the last number of months meant prices were back in sterling terms.

This has culminated last week in the majority of steers being purchased at a base price of around €4.10/kg on the Quality Payment System while heifers were being purchased on average at a base of €4.15/kg with selected lots achieving higher prices.

Across the water in Britain, reported cattle prices from the AHDB have firmed with GB R4L grade steers averaging at Stg 368.3 p/kg equivalent to €5.10c/kg for the week ended March 7.

On an equivalent carcass this represents a €350 differential, using Irish figures from the week ended March 7.

So, we’re back at a €350 price differential between Irish and British beef, but where are the protests? Does the lack of protesting and farmers up in arms mean that the price differential between the UK and Ireland is down to currency fluctuations and outside our control and so should be ignored? Or does it mean that once Irish farmers receive what they consider to be a reasonable price for beef all is well, regardless of what beef prices are in our main market?

If the latter is true, then the IFA’s beef protests, which were based around the €350 price gap, were an ill-thought-out campaign and achieved nothing of benefit to farmers, as we’re back to such a major price differential that’s now being ignored.

Perhaps the Beef Forum will address this issue at its next meeting and explain to Irish farmers why beef prices may have risen over the past few months, they still remain far removed from producer returns available in the market that still accounts for almost 50% of Irish beef exports.