Consumers in the Netherlands have made it clear that they strongly prefer milk produced from cows that have extensive access to grazed grass, according to Dr. Theun Vellinga.

“There is also a growing public backlash to the practice of removing dairy calves from their mothers as day-olds.

“The milk industry in the Netherlands is also under severe pressure because of the perceived landscape damage it is causing,” the Dutch Livestock Research Scientist said.

Vellinga was a speaker at this week’s Agri-Food and Biosciences Institute (AFBI) Stakeholder Conference at the Dunadry Hotel, Co Antrim .

He confirmed that the Netherlands will undertake a radical dairy cow culling policy, in order to ensure the country can become compliant with the terms of the EU Nitrates’ Directive.

According to Vellinga, a three-pronged approach has been proposed to the Dutch government to reduce phosphates from 2017.

At present, the Dutch phosphate limit is 172.9m kilograms, which has been exceeded for the past three years.

The plan would see a reduction in the dairy herd (with compensation), penalties for those producing more milk than a predetermined reference quantity and reducing the levels of phosphorus in compound animal feeds.

The combined effect of this is expected to lead to a total reduction of 8.2m kilograms.

A reduction in Dutch cattle numbers – in the order of 175,000 head – is envisaged. This would lead to an 11% reduction in annual milk output

“The pig and poultry sectors are not under the same level of scrutiny from Brussels at the present time,” he said.

However, we are now seeing a greater emphasis placed on the development of manure processing plants in many regions of the Netherlands.

“Phosphate extraction will be a clear focus for these businesses. There is also a greater requirement for the Dutch livestock sectors to export slurry and manures out of the country,” Vellinga said.

He added that growing environmental pressures were forcing the Dutch pig industry to re-think its business model.

“Increasingly, weaned pigs are being shipped to countries such as Romania in Eastern Europe for finishing.” 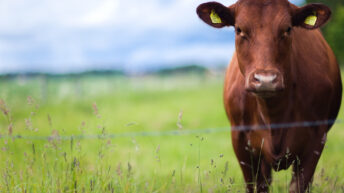 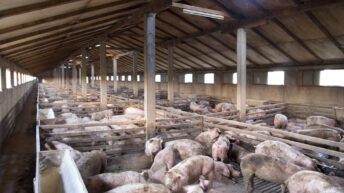