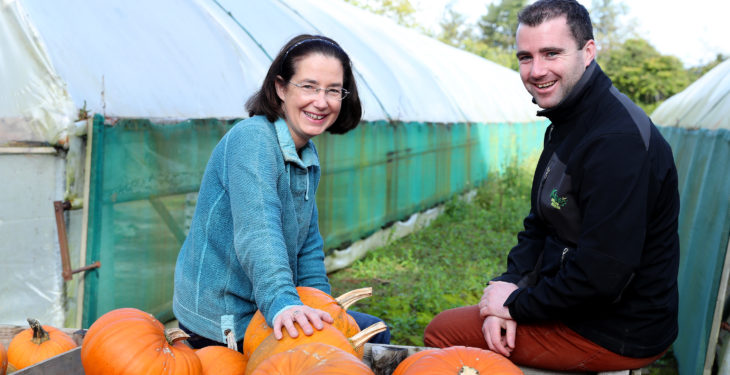 She is one of five Irish pumpkin growers that supply SuperValu. Her 100ac farm harvests 25,000 pumpkins annually, with a portion of those going to Keelings – which distributes them to the supermarkets. The remainder go to other distributors and into the Dublin market. “We also sell from the farm – anybody that wants to come out can do so.”

Buckley’s family has been farming at Lispopple, between Swords and Ashbourne, since 1922. She took over the farm from her mother after sitting her Leaving Cert. Her husband separately farms 500ac – focused on cattle, sheep, horses and grain.

“I looked for something that wasn’t being grown by too many other farmers when I started out, so I got into pumpkins and courgettes. I also grow: apples; plums; squash; and winter and summer flowers, and do decorative gurds,” she said.

The first pumpkin seeds are planted in poly tunnels in April, to allow for picking from mid-September, and she also plants out in May. Picking is still taking place.

Labour is my greatest challenge, as it is across farming in general. It’s hard and cripplingly expensive to get experienced labour for picking and washing, with the minimum wage having gone up.

The vagaries of Irish weather also impact on pumpkin growing, Buckley said. “It’s always a challenge to grow in our climate – pumpkins need both rain and warmth. We will always get the rain and we can irrigate if we have to. This year wasn’t too bad – the pumpkins are of a fairly good size.”

Another test is competing with imports, mainly from Holland. “More people here want to buy Irish and that helps.

People need to realise that not alone are they cutting down on carbon footprint by doing that, they are also generating money that will go back into the Irish economy.

“We are getting a bit better at doing that, but it’s up to the supermarkets to promote that,” she said.

SuperValu has said that it expects to sell 120,000 hand-harvested Irish pumpkins this Halloween, with prices starting from €2 for medium-sized pumpkins. 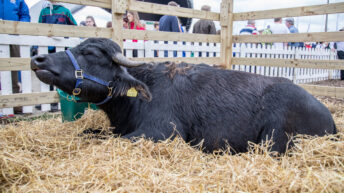