John Stokes operates a tillage farming business in north Cork alongside his brother Willie and his nephew Mark.

The Stokes family grow the normal spread of arable crops, as well as some grassland and forestry. To pick up the slack during quiet times of the year, they also carry out some machinery contract work.

Speaking at last Tuesday’s Energy in Agriculture event, John said: “We suffer an annual average rainfall of 1,100mm and the annoying part about that is it doesn’t just rain in the winter.”

Aside from the months of December, January and February, August is a very high rainfall month and this adds complications to getting cereal crops dry enough to harvest, he said.

“Our land is medium-to-heavy. I was under the misconception that the heaviness of our land made it difficult. It didn’t – it was actually the amount of rain we get that makes our life difficult.”

As a result, the family looked at alternative methods of drying the grain produced on their farm.

Before we embarked on our storage and drying facility, we sold grain in a number of different ways. We sold green grain to merchants and we also sold seed crops directly to a seed assembler.

“We treated some grain with additives and we also stored grain in paid contractor storage,” he said.

The latter option, John said, turned out to be quite profitable in some years and that’s what encouraged them to embark on developing their own grain drying facility.

“We started seriously looking at the project in 2009 and we looked at how others were doing it. It looked daunting at the outset, as it required a large investment in terms of capital, time and energy.

“Other storage facilities were driven by diesel, kerosene, gas and electricity. At the time, in 2009 and 2010, oil was still quite high at $140/barrel. When we finally made the decision, oil had dropped back to $110/barrel.” 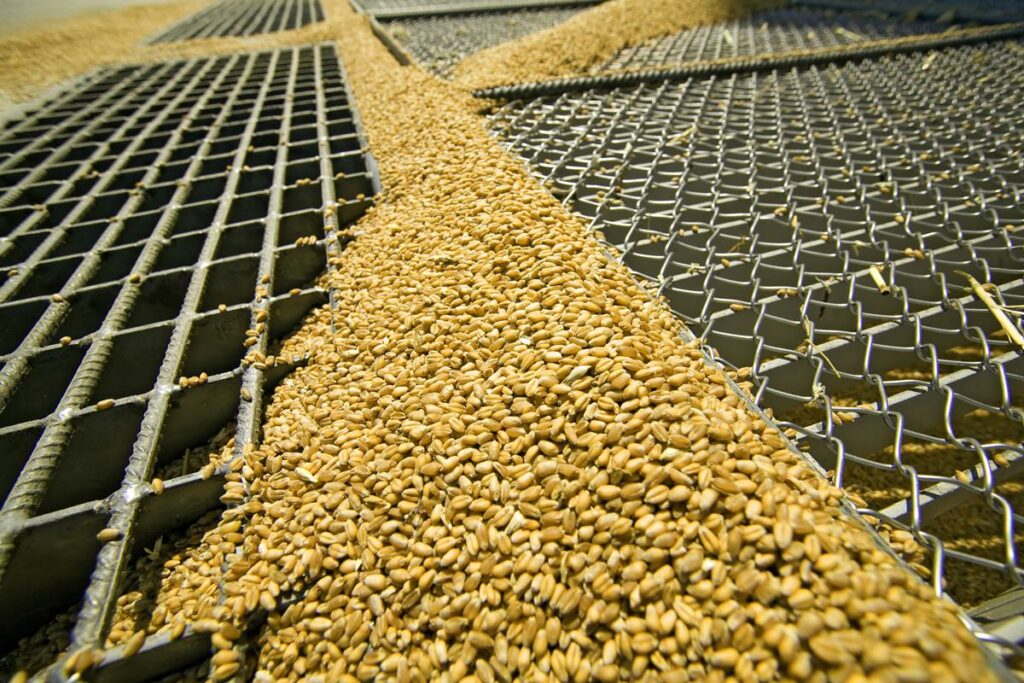 Initially, the Cork-based farmers set out to dry grain with ambient air. But, the decision was later made to use straw to generate heat to dry some of their cereal crops.

This occurred as the relative humidity of ambient air, particularly on wet days, wasn’t going to have the desired impact when it came to drying the stored material.

Gerry Reaburn, a renewable energy specialist from Co. Louth, spoke about how much straw the Stokes would require on an annual basis to dry their grain.

1t of straw is worth approximately 400L of diesel, he said, and a 4×4 bale is the equivalent of 50L of diesel. That leaves the requirement at approximately 250 bales or 25 acres of straw to dry 1,800t of grain each year.

To facilitate the drying of grain with straw, a burner was installed that is capable of holding two 4×4 bales at a time.

The resulting heat from the straw burning process is used to heat water stored in a buffer tank.

This water is passed through two heat exchangers and the air is then circulated through the grain using two 30KW fans and a system of floor ducts. This system is capable of generating 200KW of energy with dry straw.

John added: “We put the shed up in 2012 and it was the most appalling harvest in recent memory.

We harvested no winter barley in July that year, as the harvest ran into August. Even after waiting, we harvested the crop at between 23-27% moisture.

After harvesting, the grain was placed in the drying shed and it was brought down to a moisture content of 15%, he added.

From an economic point of view, John said the decision has made absolutely no sense to date. This comes as there has been no major pick up in the price of grain between harvest time and the following spring.

However, he said, it does afford them the opportunity to harvest grain at high moisture contents, while also giving them additional bargaining power when it comes to marketing their crops with merchants.

There hasn’t been a huge lift in prices between harvest and the following spring to help make this financially possible yet.

“But, those years will come and the differential between selling green grain and dried grain will pay for the store on an ongoing basis,” he said.