With quotas a thing of the past, cows will be milked on for longer this autumn than previous years, so as a result dry periods are set to be shorter.

In recent years, dry periods have ranged from 2-5 months, from now on cows will probably be dry for only 6-8 weeks. This reduction in dry cow period could potentially create issues.

The potential issues with a shorter dry period for the udder are:

The Importance of the Dry Cow Period

The dry period is an important time for the cow to rest and recover from the previous lactation.

Too thin and she will not milk as well in the next lactation and will be less likely to go back in calf on time.

Too fat and the cow is at risk of a number of costly metabolic diseases including milk fever, primary ketosis, abomasal displacements, metritis and retained cleanings.

All of the above could possibly lead to secondary ketosis and poor fertility later in the lactation.

For the udder, the dry period is both a period of risk and an opportunity to clear up existing infections.

Once a cow is dry for a couple of weeks and the udder has shrunk back, inhibitory substances, like lactoferrins and immunoglobulins are naturally produced in the udder tissue.

These products further help to eliminate underlying infections and prevent new infections from occurring in the udder.

The cow also produces a waxy keratin plug that blocks the teat canal producing a physical barrier against the entry of new infections.

Risk of Infection and Relative persistence of different Antibiotics

Not all antibiotics used for dry cow therapy persist for as long in the udder.

It is recognised that the longer an antibiotic persists for, the greater its effect on Staph. aureus which is the most commonly isolated bacteria from mastitis samples in Ireland.

The diagram illustrates that even the longer persisting antibiotics will not protect the udder during the second risk period, close to and at calving time.

At this stage, the cow is reliant on its natural defences and the keratin teat plug.

Internal teat sealants have been developed to supplement the natural keratin plug and will usually remain present until after the cow has calved down when they can then be stripped out. 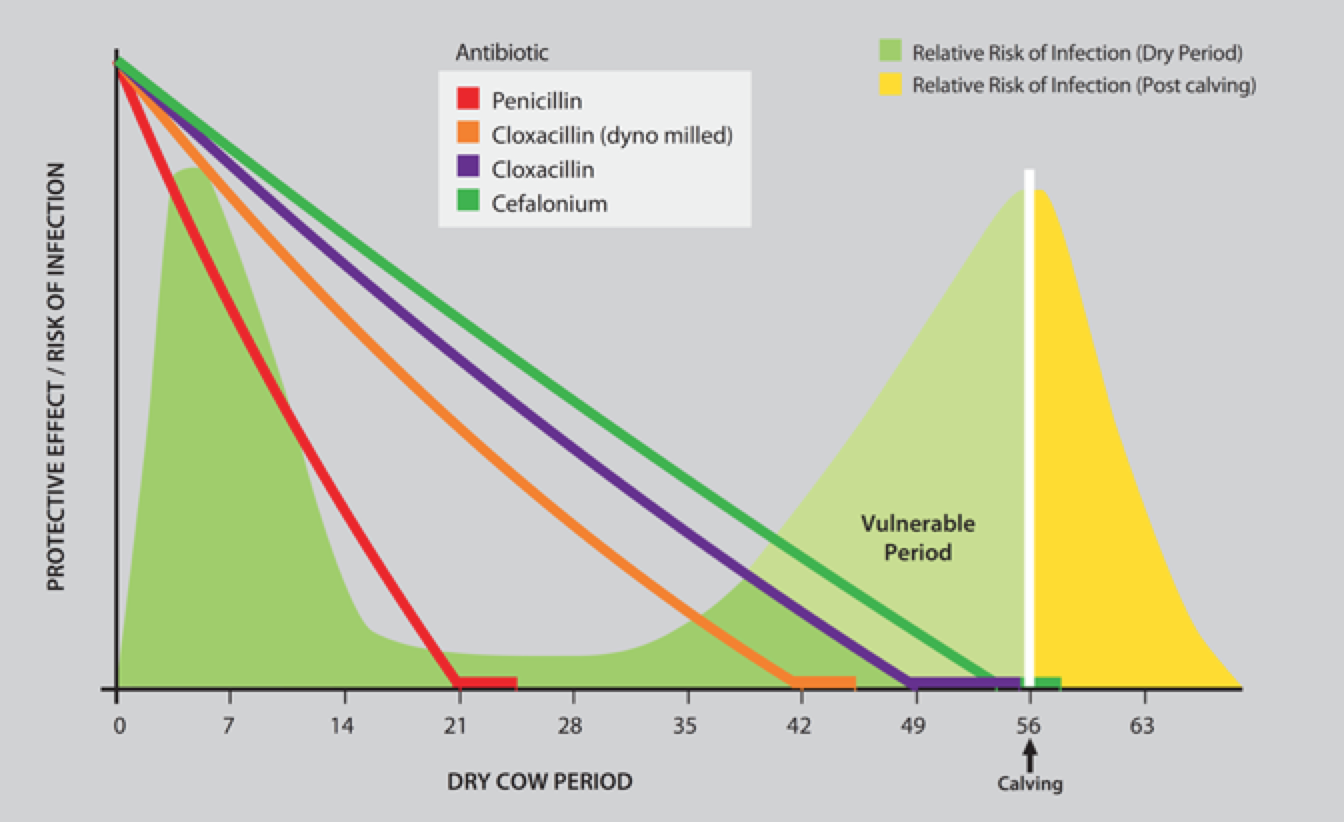 In the past, blanket dry cow therapy with a long persisting antibiotic tube was highly effective and safe as cows had longer dry periods.

In the post-quota era, where shorter dry periods of 6-8 weeks will become the norm, selection of dry cow tubes will become more critical.

Longer persisting antibiotic tubes will deliver better cure rates but will also run the risk of antibiotic residues being present when cows calves down.

The ideal treatment will be long enough to result in a cure of subclinical mastitis and reduction in somatic cell count and short enough not to run the risk of antibiotic residues once the cow has calved.

The ideal will be a tube with a dry period recommendation of about six weeks.  Scanning for pregnancy will be important so that accurate calving dates are available.

Blanket dry cow therapy is highly effective at reducing sub-clinical mastitis but antibiotic dry cow treatments need to persist long enough to allow a cure but not too long to cause antibiotic residue problems.

In association with Zoetis. Charles Chavasse is Area Veterinary Manager with Zoetis. He has 25 years’ experience working as a general practitioner with farm and companion animals.