Do farmers really pay their fair share of tax? 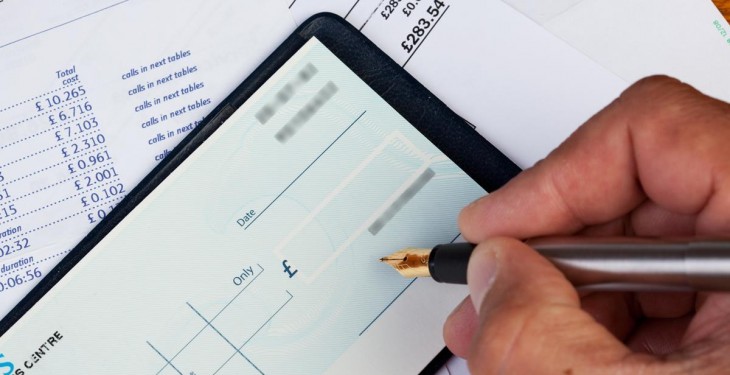 The Head of Tax at IFAC accountants has said that contrary to the perception of those in the PAYE sector, farmers are more compliant than many other professions.

Declan McEvoy said he believes this is the case because there is more paperwork in farming than in other occupations, owing to the various government schemes.

In addition, farmers have to get tax clearances for certain government grants.

Headquartered at the Irish Farm Centre in Dublin, IFAC was founded in 1975 to provide a specialised farm accounts agency.

There is a big difference between paying tax and making returns,” said McEvoy.

According to Inland Revenue, the tax-free allowance for last year and this year for a “Single, Widowed or a Surviving Civil Partner” is €18,000, whereas for those in a “Married or in a Civil Partnership” it is €36,000.

However, according to the 2012 Teagasc Farm Survey quoted in the October 2015 Inland Revenue report, “The Farming Sector in Ireland: A Profile from Revenue Data,” 71% of all farmers earned less than €30,000 in that year (2013 is the most recently available Farm Survey on the Teagasc website). 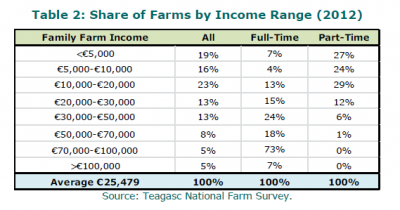 “It’s purely to do with income. If you don’t have enough income you don’t pay,” said McEvoy.

He added that in his experience the belief that farmers don’t pay their fair share comes from employees in the PAYE sector.

It’s more or less a PAYE thing, as against the self-employed. There’s a wrong assumption out there that farmers don’t pay their tax.”

“I think it’s a matter of educating people on farm incomes. There are farm surveys but a lot of it is not believed.”

McEvoy said that at present, with the exception of big tillage, dry stock or dairy farms, there is no one in Irish farming making money.

“They are making a living out of it, but that’s it.”

A spokesperson for Inland Revenue has clarified that “all income is taxable. However, depending on your particular circumstances, you may be entitled to certain credits and/or reliefs which may reduce your liability.” 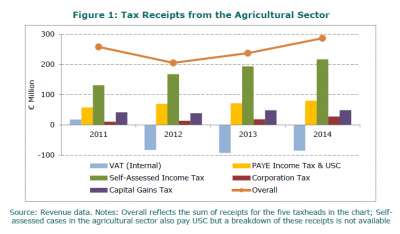 According to the October 2015 Inland Revenue report, tax receipts from the agricultural sector rose between 2011 and 2014 (see figure above).

However, as many farmers work part-time with other occupations that could be considered their main occupation, the above figure does not reflect fully the tax payments of all farmers.

This is especially the case for part-time farmers, whose tax receipts are recorded elsewhere.

According to a July 2015 ‘Taxing Matters’ report by RTE Investigations Unit, of all occupations, farmers accounted for the biggest number of tax convictions.

“It is of course, important to point out that the people listed, in the main, are those who have responsibility for organising their own taxes,” said the RTE report.

“That means a virtual exclusion of PAYE workers where tax is deducted at source.”

Using 13 years of Revenue data, the RTÉ Investigations Unit analysed all recorded convictions in the period 2002 to 2014 for certain types of tax offence.

“In total, more than 11,000 people were convicted of failing to lodge income tax returns during the thirteen year period examined, with fines totalling more than €20 million levied.”

Further information on tax credits, reliefs and rates is available on the Revenue website.