Senior officials from the Department of Agriculture, Food and the Marine held technical meetings with counterparts in Beijing today (Friday, November 2), in relation to meat market access and other topics of mutual interest.

The meetings were facilitated by the Irish Embassy in Beijing and involved senior officials from two key Chinese Ministries – GACC (the General Administration of Customs China) and MARA (the Chinese Ministry of Agriculture and Rural Affairs).

A statement from the department has described the meetings as “productive”.

The officials submitted a tranche of detailed applications from Irish beef plants for approval to export frozen boneless beef to China.

The department has prioritised the approval process for additional plants at the request of Irish industry.

The meeting with MARA followed a recent successful visit to Co. Cork by the Chinese minister for agriculture and rural affairs, Han Changfu.

During that visit, Changfu met with the Minister for Agriculture, Food and the Marine, Michael Creed, and visited a mixed sheep and beef farm with Minister of State for Food, Forestry and Horticulture Andrew Doyle.

The Chinese side emphasised the importance attached by the Chinese Government to the CIIE (Chinese Import and Export Expo) taking place in Shanghai next week.

This Expo, to be opened by president Xi Jingping, will serve as a showcase for China’s commitment to international trade.

The statement has said Chinese officials were delighted to hear that Minister Doyle will attend the Expo, which will feature a significant presence from Bord Bia and several Irish food companies. 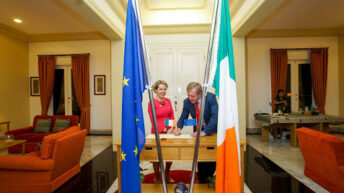