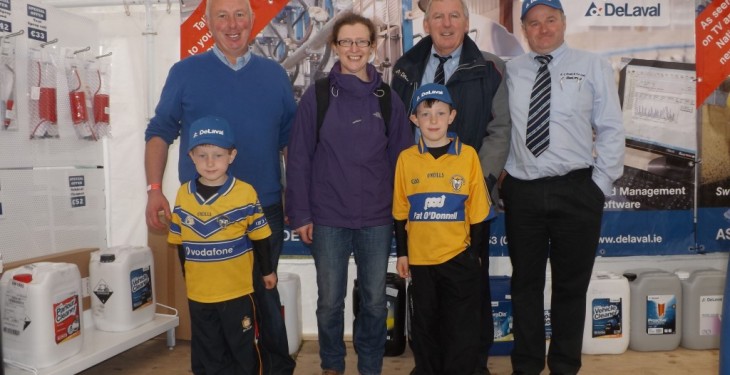 Delaval were among the exhibitors at this year’s national ploughing championship, with their technical and sales personnel busy on the E.C. Pratt & Co. Ltd stand advising dairy farmers on their award winning milking, cooling, feeding, cleaning and monitoring systems.

Visitors to the stand were entered in a free draw for the DeLaval Farm Monitoring Camera, a device which can be set-up in minutes, has a range of up to 1000 meters and images can be viewed on your smartphone.

Milk producers with high cell counts were able to check out a cell counter (DCC) for mastitis diagnostics. The lightweight portable instrument can give you the result within 45 seconds.

Speaking about the event, Steve Sefton, Sales Director, DeLaval commented “ It was notable the number of younger farmers who were looking at expanding milk production after 2015. They had a particular interested in rotary parlours and many were also looking at upgrading and extending existing milking systems.The mood among dairy farmers was positive due to excellent milk prices and the good weather conditions all summer. Dairy farmers were also interested in the special offer on the Swinging cow brush and the aftermarket range of dairy hygiene and other products.”

The Pratt business was founded in 1975 at Cork Road, Abbeyleix by Sam and Cherry Pratt. In 1979 their son Edwin Pratt joined and in 2001 they took on the DeLaval milking machine range. This now incorporates what were previously three separate dealerships. Edwin Pratt is a former President of the FTMTA.