Decision for resumption of beef exports ‘a matter for Chinese authorities’

The decision to resume Irish beef exports to China is a “matter for Chinese authorities”, according to Minister for Agriculture, Food and the Marine Michael Creed.

However, the Irish embassy is “liaising closely” with Chinese officials to seek an early resumption of the beef trade to China, Minister Creed added.

The minister was responding to a parliamentary question on the matter from Fianna Fáil TD Anne Rabbitte on Tuesday, June 16.

Referring to the case of atypical BSE discovered in Tipperary in May, the minister noted:

“The OIE [World Organization for Animal Health] has determined that the incidence of atypical BSE is not considered in determining a country’s BSE risk status.

Hence, the discovery of this case has no implications for Ireland’s ‘controlled risk’ status which has been in place since 2008.

“This classification recognises that Ireland’s BSE controls are effective and that, under OIE rules, Irish beef can be safely traded internationally.”

The epidemiological report in this case has been forwarded to the Embassy of Ireland Beijing for onward transmission to the Chinese authorities.

Our embassy is liaising closely with relevant Chinese officials with a view to seeking an early resumption of the beef trade to China. The decision to resume trade is a matter for the Chinese authorities.

“It is not possible at present to estimate what potential losses, if any, might result from the temporary suspension of the beef trade with China.

“The available data shows that beef exports to China have grown significantly in the short time that the market has been open.”

According to the latest CSO [Central Statistics Office] data, almost 8,200t of Irish beef worth approximately €40 million were shipped in 2019, the first full year the market was open.

“Shipments in the first quarter of 2020 amounted to some 2,200t and were worth approximately €11 million,” Minister Creed concluded. 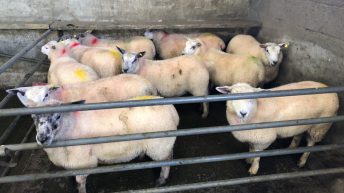 Price cuts to lamb ‘yet another blow for sheep farmers’