Dairygold’s ‘wrap it pink’ campaign raises over €10,000 for cancer awareness 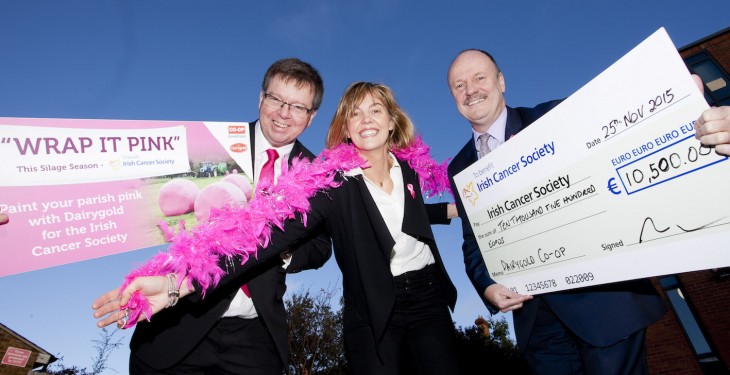 Irish farmers together with Dairygold have contributed €10,500 to the Irish Cancer Society through the Society’s ‘Wrap it Pink’ campaign.

Farmers across Ireland embraced this campaign with open arms and wrapped their silage in bright pink silage wrap bought from the Munster based co-op.

Dairygold’s pink wrap sold out in a matter of weeks and over 40,000 bright pink silage bales appeared in almost every parish in the country as farmers outside Munster went to Dairygold’s online store to purchase pink wrap.

John O’Carroll, Head of Retail at Dairygold said: “We were overwhelmed by the response to Wrap It Pink during the summer.

“The campaign really struck a chord with farming families who have been affected by cancer and farmers were proud to wrap their silage in pink for a great cause. We are now planning Wrap it Pink for 2016 and look forward to continuing our partnership with The Irish Cancer Society.”

Wrap It Pink was an initiative of Dairygold in which both the farmer and Dairygold made a contribution to the Irish Cancer Society for every roll of pink silage wrap sold.

This distinctive, high quality, Irish made wrap was available from Dairygold’s network of retail stores, Co-Op Superstores across Munster and online at www.coopsuperstores.ie

Mark Mellett, Head of Fundraising at the Irish Cancer Society said: “We are so thrilled with the amazing success of Wrap It Pink. It was such a unique campaign that has really helped us raise awareness of breast cancer in rural Ireland which sadly is still killing so many women.

“Around 700 women die from breast cancer each year, so we still have a lot of work to do in terms of raising awareness, ensuring women go for screening and supporting those affected at every stage. We very much appreciate all of the farmers support and look forward to working with Dairygold on this initiative again in 2016.”