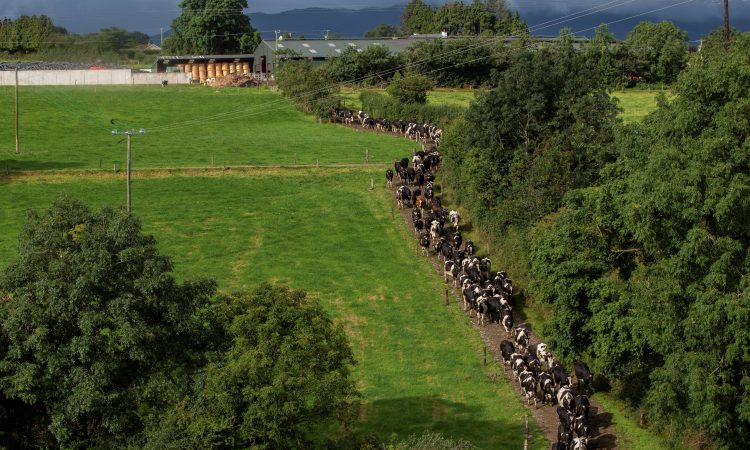 Farming at the foothills of the Comeragh Mountains, Kieran Hearne has expanded his dairy farm a lot over the last number of years to drive productivity out of his farm, but he has done so while trying to ensure that his impact on the environment doesn’t increase.

Not only that, Kieran was this year’s overall winner of National Dairy Council (NDC) and Kerrygold Quality Milk Awards.

We caught up with Kieran Hearne – on his family dairy farm in Rathgormack, Co. Waterford – to find out what it takes to become a Quality Milk Award winner and to learn more about the steps he is taking – on his farm – to reduce his environmental impact.

Kieran is the second generation to farm the now 200ac farm after his father passed away in 1993. Like many Irish dairy farms, it is a real family affair with all of the family helping out when it is needed.

Currently milking on the farm are 190 spring-calving dairy cows with grass making up the majority of the herd’s diet.

What is most impressive about the Hearne family farm, is Kieran’s constant efforts to protect the environment, not because he has to, but because he wants to.

“I want them to be able to look in and see a nice farm which is producing milk. I think that is the way most farmers think,” he added.

Focusing on the genetics of his herd from an early stage, has allowed Kieran to build his herd up to one of the highest-EBI herds in the country.

“When I started off it was in the middle of the quota years; we had lots of land but not enough quota. I decided the best way for me to improve my profitability was to get as much as I could out of my cows,” said Kieran.

Continuous improvements in the EBI of his herd, have lead Kieran to reduce his greenhouse gas (GHG) emissions by improving his cow performance – reducing the emissions per kg of dairy produce.

The EBI for Kieran has also had a positive influence on the milk production performance of his herd.

It was these impressive milk production figures which lead to Kieran’s nomination by Glanbia for the NDC and Kerrygold Quality Milk Award.

Filling us in on some of the steps he has taken to achieve these figures, he said:

“The herd has expanded a lot over the years and once we reached our maximum I used milk recording to pick out any cows with SCC problems. We would then cull a certain percentage of these each year.

“Since we stopped growing, it has allowed us to be more particular about our cows. Our production has really moved on in the last few years because of this.

“Good management goes a long way too – in terms of keeping the cubicles clean, having cubicle spaces for all the cows and taking note of any cows with problems over the year,” he added.

This year Kieran explained that he will be practicing selective dry cow therapy (SDCT) on 20% of his herd.

“We are just going to feel our way into it this year. I think it is coming down the line anyway, so you might as well be proactive about it, rather than reactive,” he highlighted.

Kieran has always made a conscious effort to protect the biodiversity on his farm.

He said: “The way I look at it is, I got the farm from my father and it only really passes through your hands. I want to pass it over to who ever is coming along behind me in a nice way.”

Looking around the farm, the place is filled with broad-leaved trees and high hedgerows providing plenty of shelter and homes for any widelife on the farm. Some of Kieran’s hedgerows are 2.5m plus in height.

“When I was in the Rural Environmental Protection Scheme (REPS) I planted that ditch across the road and it is something I am really proud of because it is in a really cold part of the farm and there is a lovely ditch out there now.

“I just like to have the place looking nice. You don’t have to go out and plant a lot of ditches all over the place, but a lot of my ditches are strategically left in places to block the wind.

You can do both, you can have a productive farm, or an intensive farm, while looking after the wildlife as well.

The family have also recently placed some homemade bird boxes around the farm.

This year protected urea has begun to be used on the farm. The urea is coated with a urease inhibitor (NBPT) to reduce ammonia emissions.

“We had a discussion group meeting and we discussed what small changes you can make and the impact they would have. So, I switched over to protected urea.

It is a win win, because it is good for the environment, it is a little bit cheaper and it lasts in the ground better too.

Meanwhile, all the slurry on the farm is applied using a dribble bar – a low emissions slurry spreading (LESS) option – which is spread by a contractor.

Another point Kieran made was having adequate slurry storage on the farm for all his cows allows him to spread slurry when he wants to, not when he has too.

Having enough slurry storage and housing facilities is sustainable too. No matter what weather hits you, you are ready. All the cows have a place to lie, a place to feed and there is a place for all their slurry.

The farm is in derogation, so Kieran has to soil test; but despite this, he completes some soil tests outside of these compulsory soil tests “to see how things are going”.

This allows him to target nutrients to the paddocks where they are needed most and avoids any nutrients being wasted. Currently, his soils are mostly in index 3 for N, phosphorus (P) and potassium (K).

Before we left, we asked Kieran ‘does he think farmers are willing to make changes on their farms to protect the environment’, answering, he said:

“I think the vast majority of farmers are willing to make changes on their farms to protect the environment.

“Eventually, we are all going to have to make changes because that is what the consumer wants and we have to please them; they are buying our product at the end of the day.” 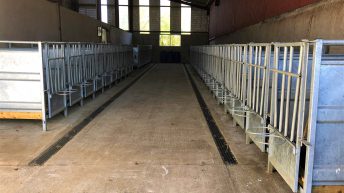 Dairy focus: Calf rearing to the highest of standards in Co. Cavan