Farming just off the coast of Co. Cork near Ballymacoda, Dick and Eoghan O’Neill, along with their neighbour Barty O’Sullivan, run a herd of 265 Holstein Friesian cows.

The trio, who are in partnership together, run a spring-calving system, which sees all their heifer calves kept and all the bull calves sold around 16 days-of-age.

The farm has gone through many stages of expansion. In 2003, Dick and Barty joined up and brought their two blocks of land together – which, as of now, consists of 230ac.

The milking herd, back over 17 years ago, when the duo originally joined up together, consisted of 93 cows. Fast forward up to when milk quotas were abolished in 2015 and the duo were running 160 cows through the milking parlour.

In 2017, Eoghan came home full-time – after a stint working down in New Zealand – which saw him, alongside his father and Barty, help in the next phase of the expansion of the farm.

As of now, the milking herd consists of 265 cows; however, the aim is to push that number up to just over 300 in the near future.

Speaking to AgriLand about how the farm has expanded over the years, Eoghan said: “The expansion here has been gradual – over a 17-year period.

We have extended the parlour twice since it was installed. Also, we have upgraded the facilities around the farm and built new ones – such as extending the cubicle shed and building a new calf house.

“We milked just over 280 cows last year but we are back down to 265 cows this year. We hope to move up to 300 in the not so distant future – which is where we would be comfortable at.” 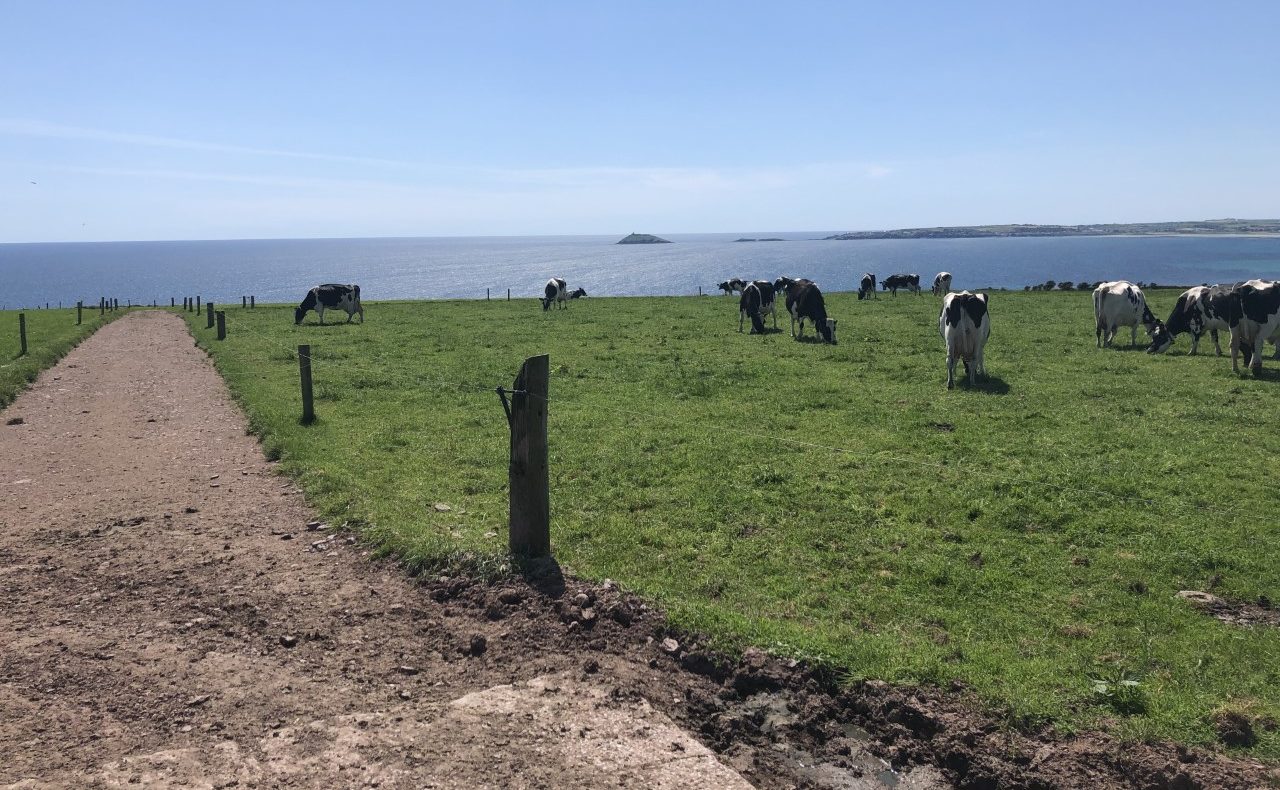 A spring and autumn-calving system was in operation on the farm up until 2017. 70% of the cows used to calve in spring, while the other 30% calved in autumn.

The idea of operating a split-calving system was to facilitate the increase in cow numbers. Therefore, in 2018, the trio decided to switch back to a 100% spring-calving system.

The decision to not stay with a split-calving system was very simple, according to Eoghan.

He explained: “We never stopped going when we were calving in spring and at autumn; we were constantly working.

Once we had reached the number of cows we wanted to milk we said enough was enough and we reverted back to a 100% spring-calving system.

“At least now, we have a bit more downtime. If we were still autumn-calving we would be, at this stage of the year, gearing up for it now.

“Whereas now, it’s a little bit quieter. Don’t get me wrong, there is always something to be doing; for example, we have 20ac burned off to reseed, so we will busy at that next week. But, once the breeding season is over, it starts to get a bit quieter.” 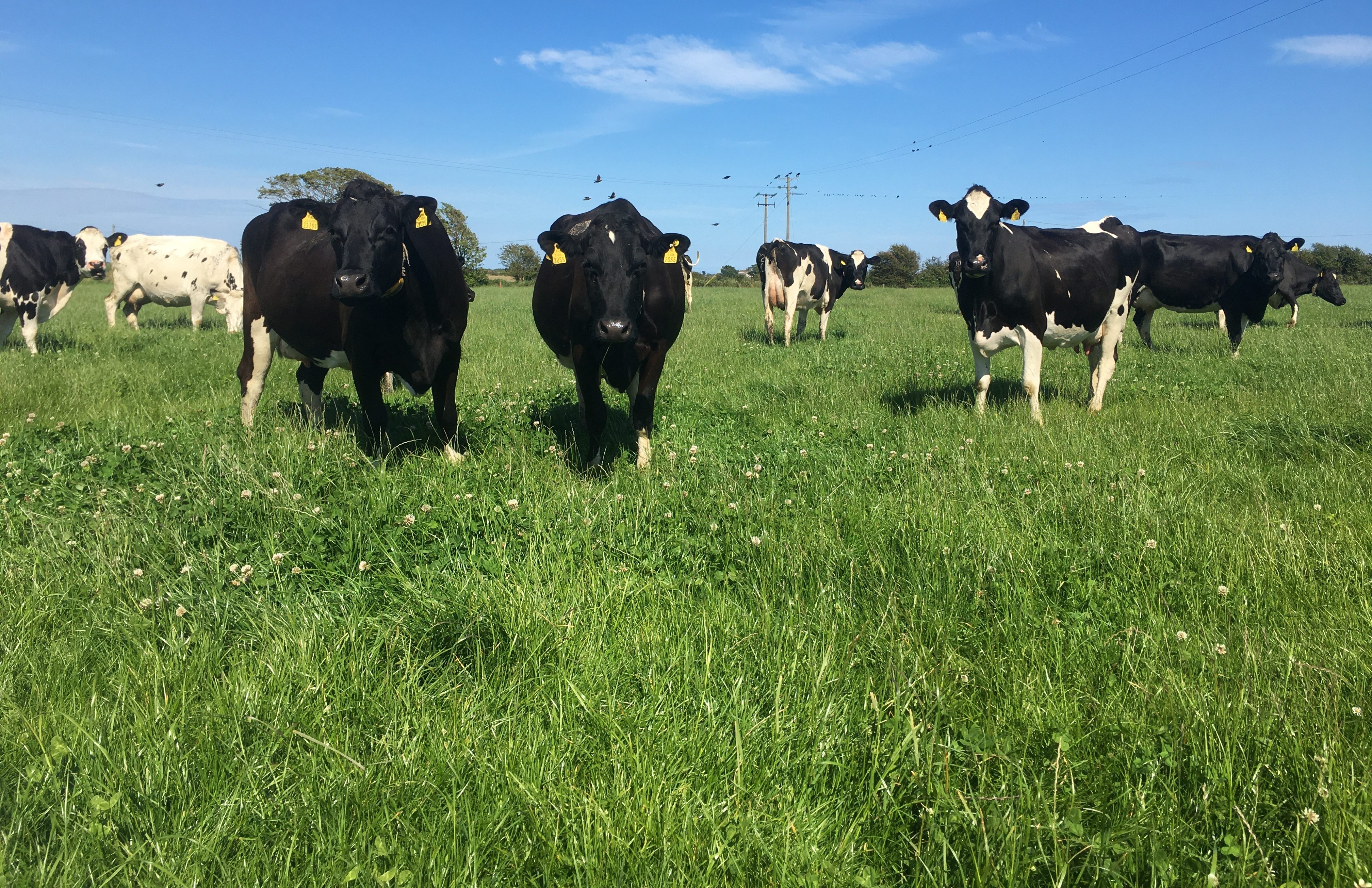 The breeding season, which lasted for 12 weeks, finished up last Sunday on the farm.

Eoghan explained: “The breeding period kicked off around April 18 and finished on July 19. We used 100% AI for the entire breeding period. For the first six weeks, we used Friesian straws and for the last six weeks we switched over to beef.

“In terms of beef sires, we used mostly Angus straws. Last year, we tried out a few Belgian Blue straws and we had some great calves but we found them fierce hard to sell – which took us by surprise as we thought there would be a good demand for them.

Every single cow that didn’t keep to their Friesian serve got an Angus bull; we didn’t go messing around picking different beef bulls for certain cows. 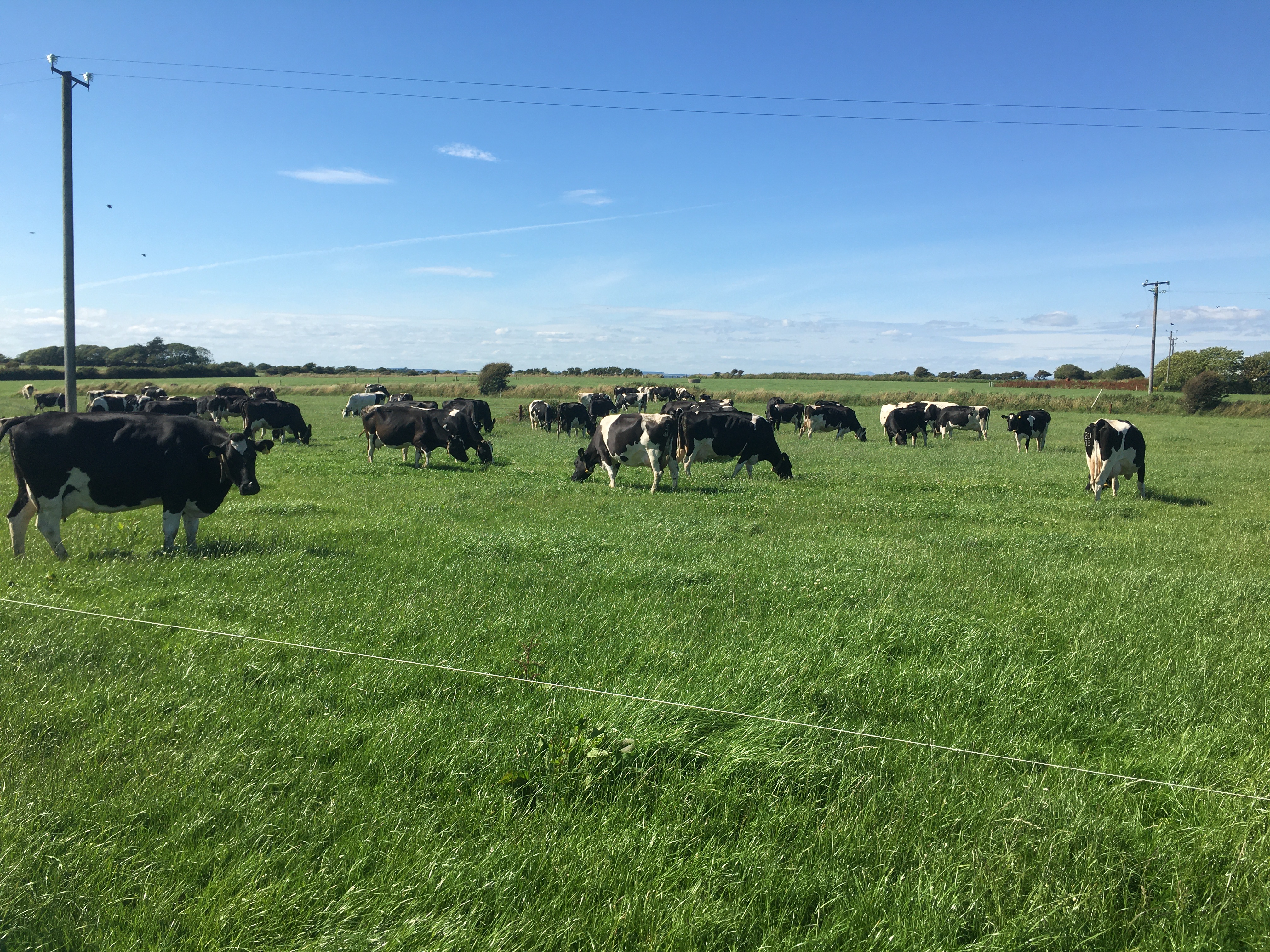 He added: “We finished calving late this year. Cows were still calving when we started breeding, so that was probably the reason why we didn’t hit the 100% submission rate mark.

Our conception rate to first serve was around 57%, which is normally what we hit every year; we were happy enough with it. Normally, we would have a 7-8% empty rate; although it ran up a bit higher last year.

“If we have an empty rate of more than 10% in a month’s time when we scan we will be very disappointed. It’s a tough couple of weeks [breeding period], especially when you’re doing 100% AI.

“This year, over 310 cows and replacement heifers were served; however, not all of these will be kept. Depending on the empty rate, will probably sell 30-40 in-calf heifers. We hope to milk 270-280 cows next year if we can. 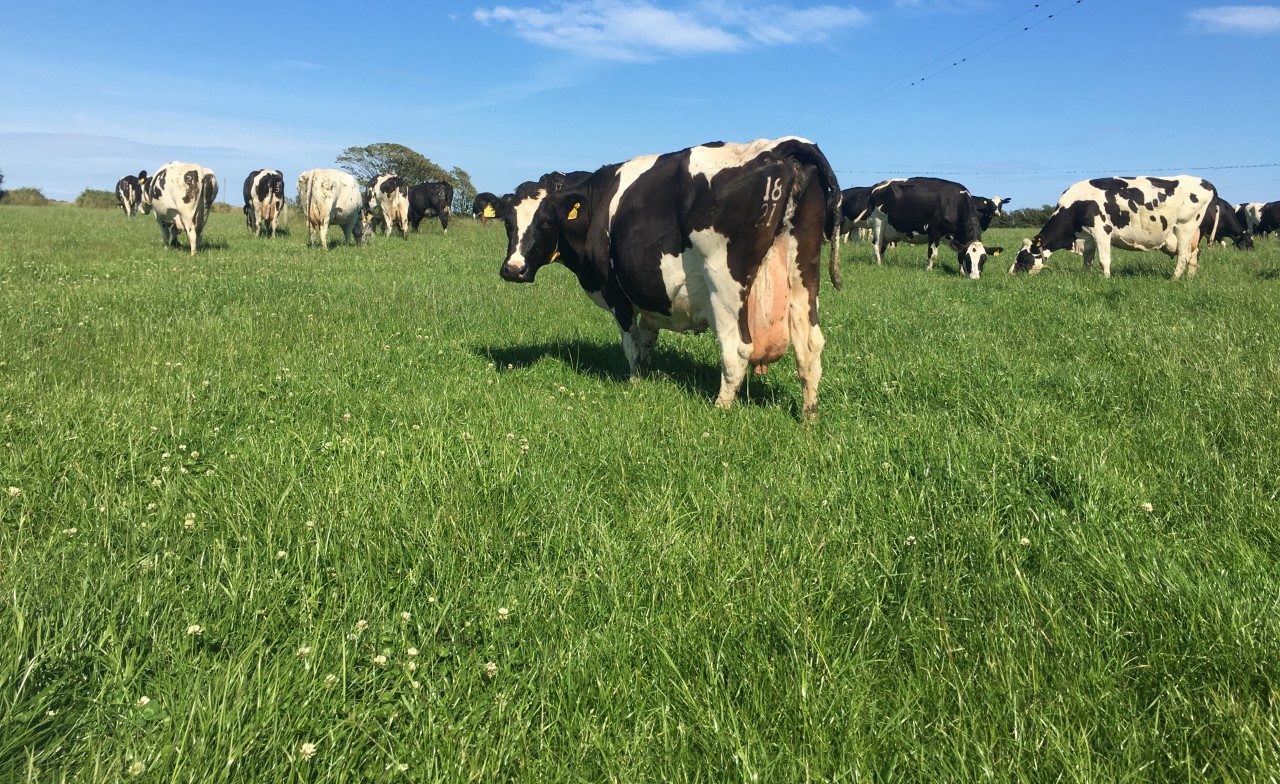 “A big help at breeding time is the drafter that we have just outside the front of the parlour. We have collars on all of the cows, so we never have to stick a tag number into a computer. The drafter will detect if a cow is in heat and divert her into the cubicle shed.

If we had to milk cows and try and separate cows we saw in heat we would never leave the parlour for those couple of weeks.

“To be honest, we had a choice between buying a drafter or buying in a team of bulls. When we broke it down and looked at the economics of it, it made sense to go with the drafter.

“It was better value to buy a drafter than it was to be buying a team of bulls and replacing them every few years, even though the cost of installing the drafter was fairly significant.” 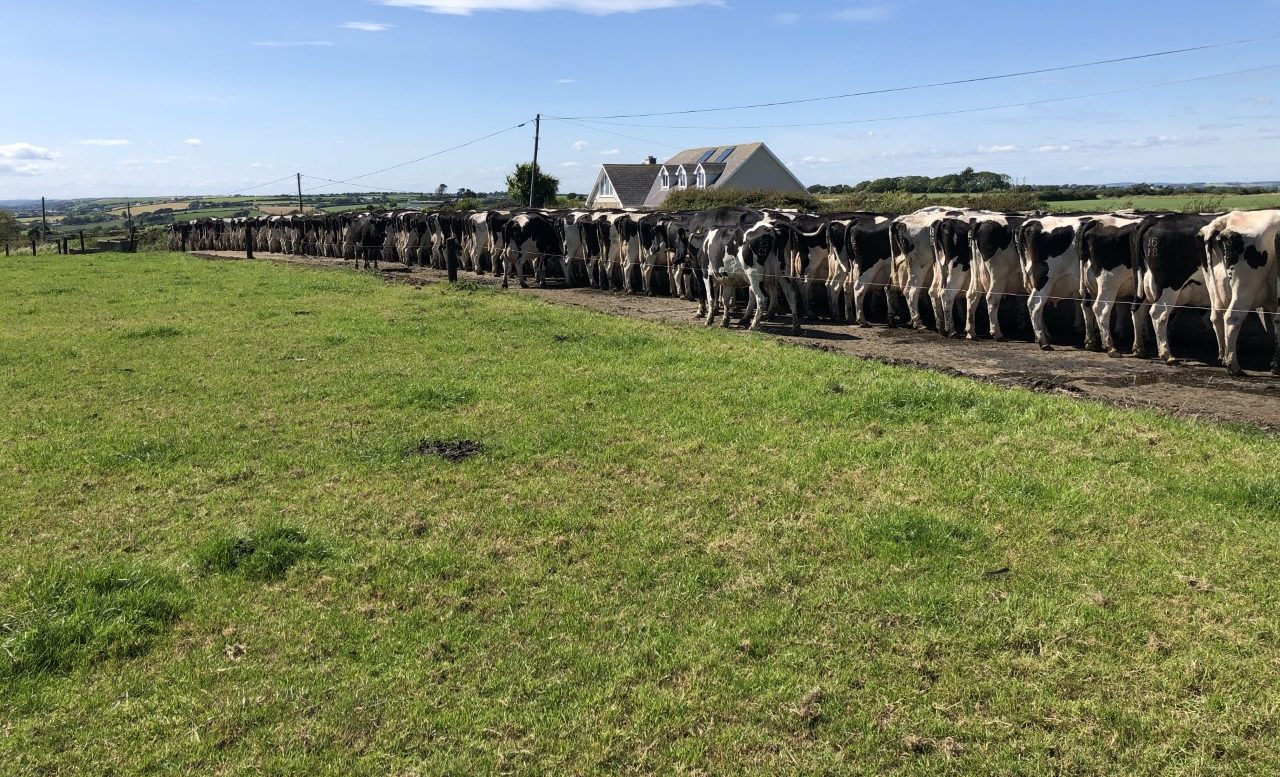 How are the cows performing?

In terms of how the herd are performing, Eoghan said that they don’t necessarily reach a peak at a certain time of the year.

He noted: “Most farmers will say that they hit a peak at a certain time of the year but, here, for us anyway, we see that the cows produce a steady, but good, volume of milk over a sustained period of time.

“Last year, cows were producing much the same volume of milk and we hit 4.31% fat and, again, 3.67% protein, so we are happy with how they are doing.

“We have a fairly low somatic cell count [SCC] as well, which is something we keep a close eye on.” 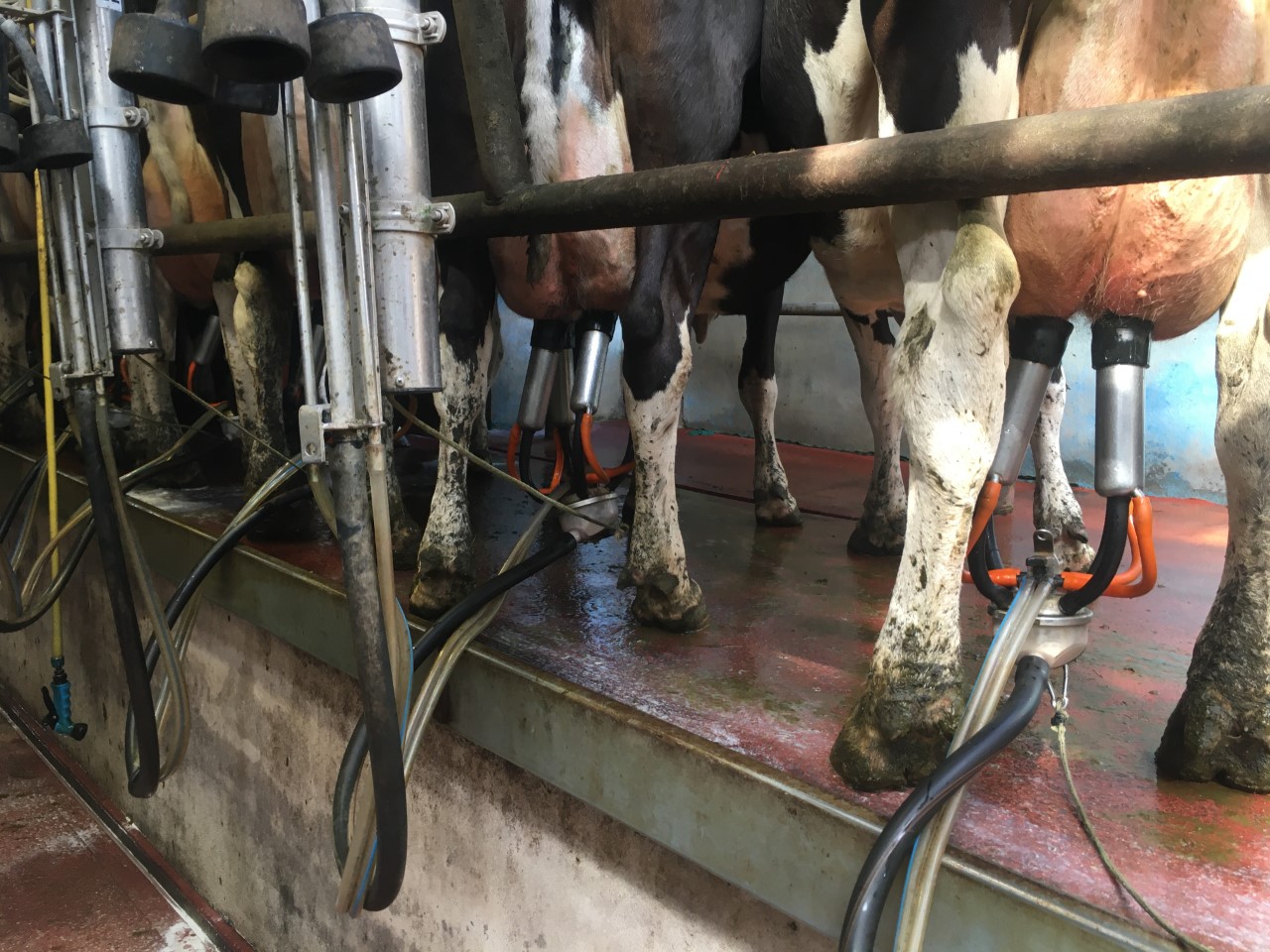 Something which isn’t too commonly carried out on dairy farms is buffer feeding; however, it is something Eoghan credits when it comes to the cows producing large volumes of milk over a lengthy period of time.

He explained: “Buffer feeding is a popular enough around this region. I know a good few farmers that do it.

The majority of farmers in Ireland feed their cows in the parlour, whereas, we feed ours before they go into the parlour.

“We have a feeding trough out beside the cubicle shed, that has been there for 12 years, and every day, once-a-day, when the cows come in for milking there is total mixed ration [TMR] waiting for them.

“It’s a very clean way of feeding the cows, instead of having to go out to the fields and put out feeders. We used to feed nuts in the parlour, but due to expansion and the feeders giving bother we decided to get rid of them.

“They get to eat there for about 30-40 minutes before each milking. They generally make their way up to the gate when there finished and ready to be milked.”

The TMR consists of silage, straw, soya, wheat and beet. Eoghan said that the cows are very content, as he has a lot of people asking him what way the cows do be like in the parlour when they aren’t getting concentrates such as if they are unsettled.

He explained: “The cows don’t know any different. They never got meal in the parlour, so they don’t be looking for it. They don’t even know what nuts are.

“The only time we ever fed nuts was in 2018 during the drought because we couldn’t get anything else.

“They get them as calves and that’s it. It works for us but, look, everyone has their own ideas and opinions.

At the moment, they are probably getting 2.5kg of a TMR. During the dry spell there a few weeks ago, they were getting up on 7kg because about 50ac of our ground near the parlour during dry weather burns up straight away and stops growing.

“The diet feeder is there so we felt we might as well get the use out of it while it’s there. I wouldn’t say it’s any cheaper compared to feeding concentrates but it’s no dearer and our cows seem to do well on it.” 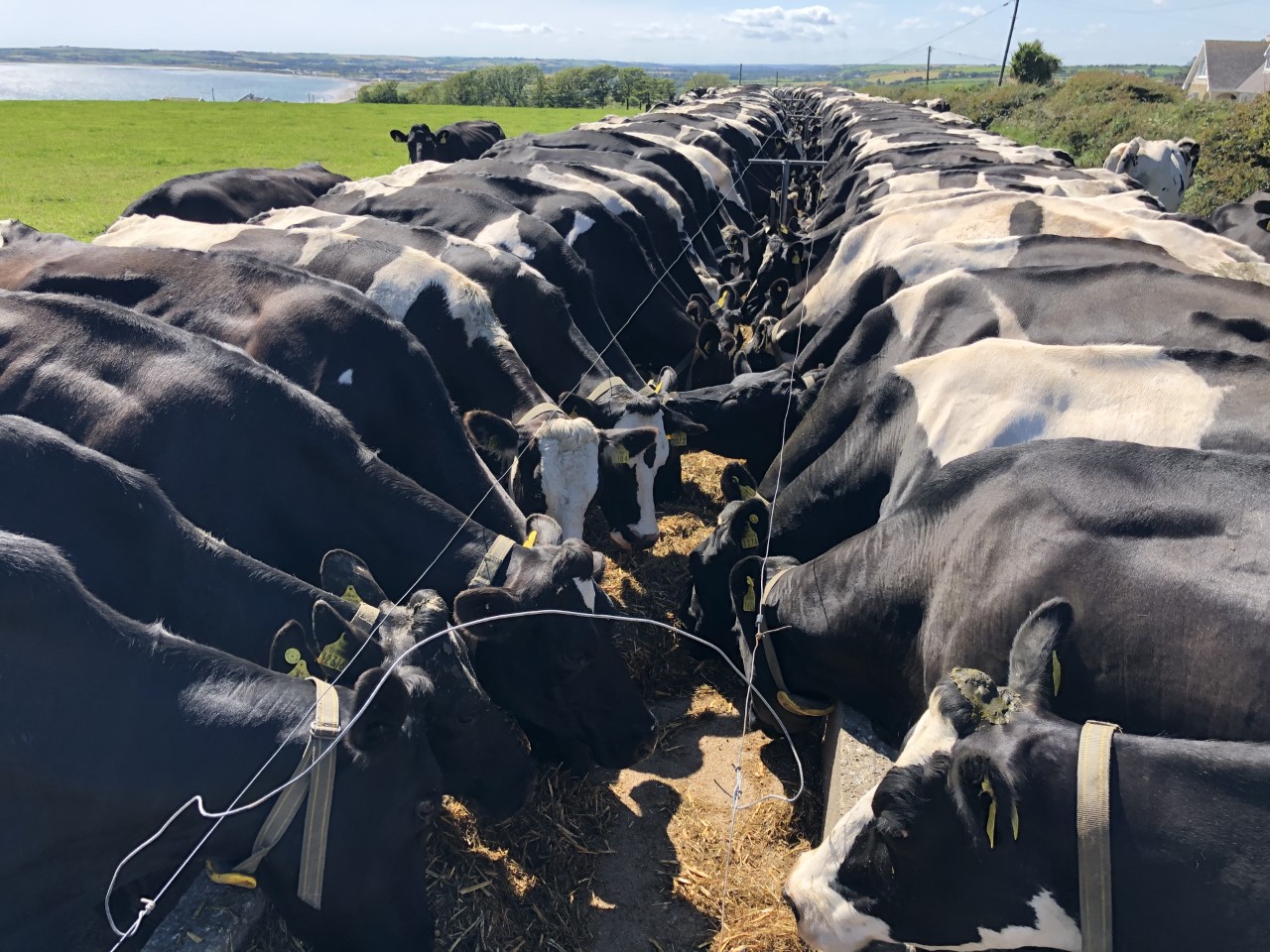 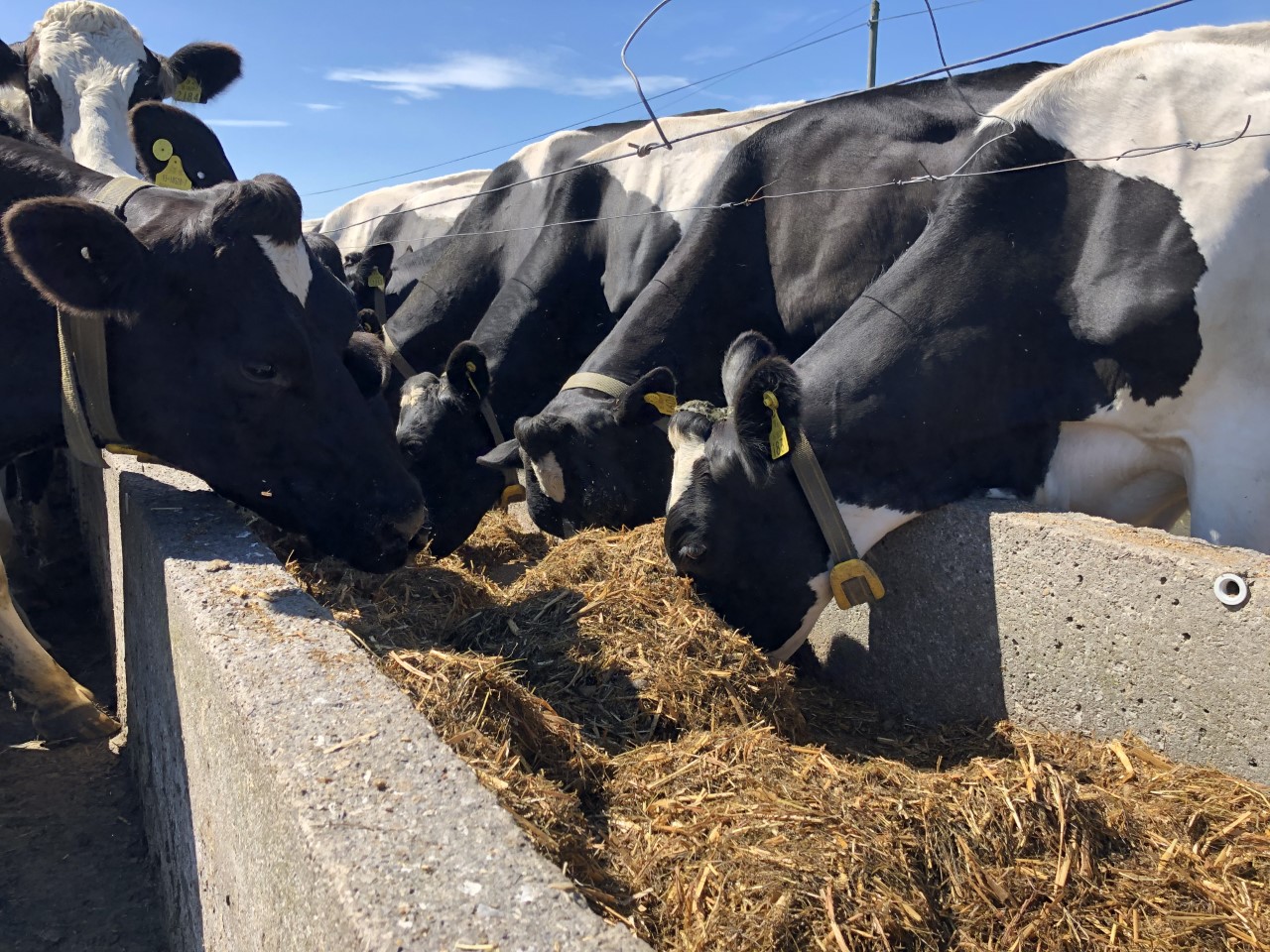 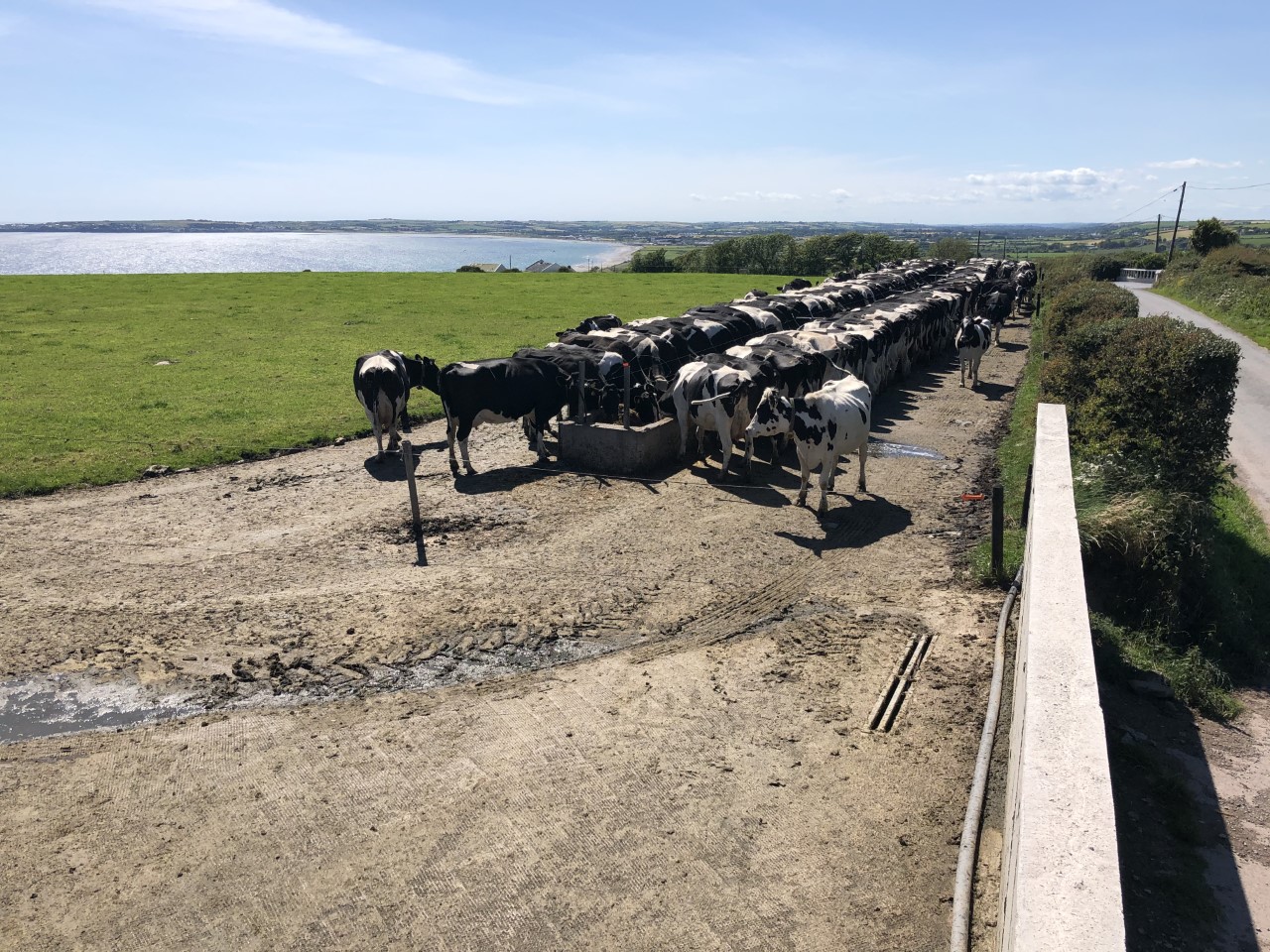 Depending on where the cows are the entire milking process from bringing the cows in, to letting them eat at the trough and then actually milking them can take over three hours to do.

There last Monday, it happened that I was the only one around the farm for the morning milking and I thought I’d never be done. I had the cups on for 6:10am and the last cow didn’t leave the parlour until 8:15am – between everything it took three hours to do.

“Usually one person is waiting in the parlour for the cows, which these last few weeks has been my father, while I would move them up into the collecting yard.

“Then, when I head into the parlour, my father would usually spray the cows before and after, while I would stick on the clusters.

“Once you have a system in place it takes no length to milk them. It’s a 24-unit parlour so it works out at just over 11 rows of cows.” 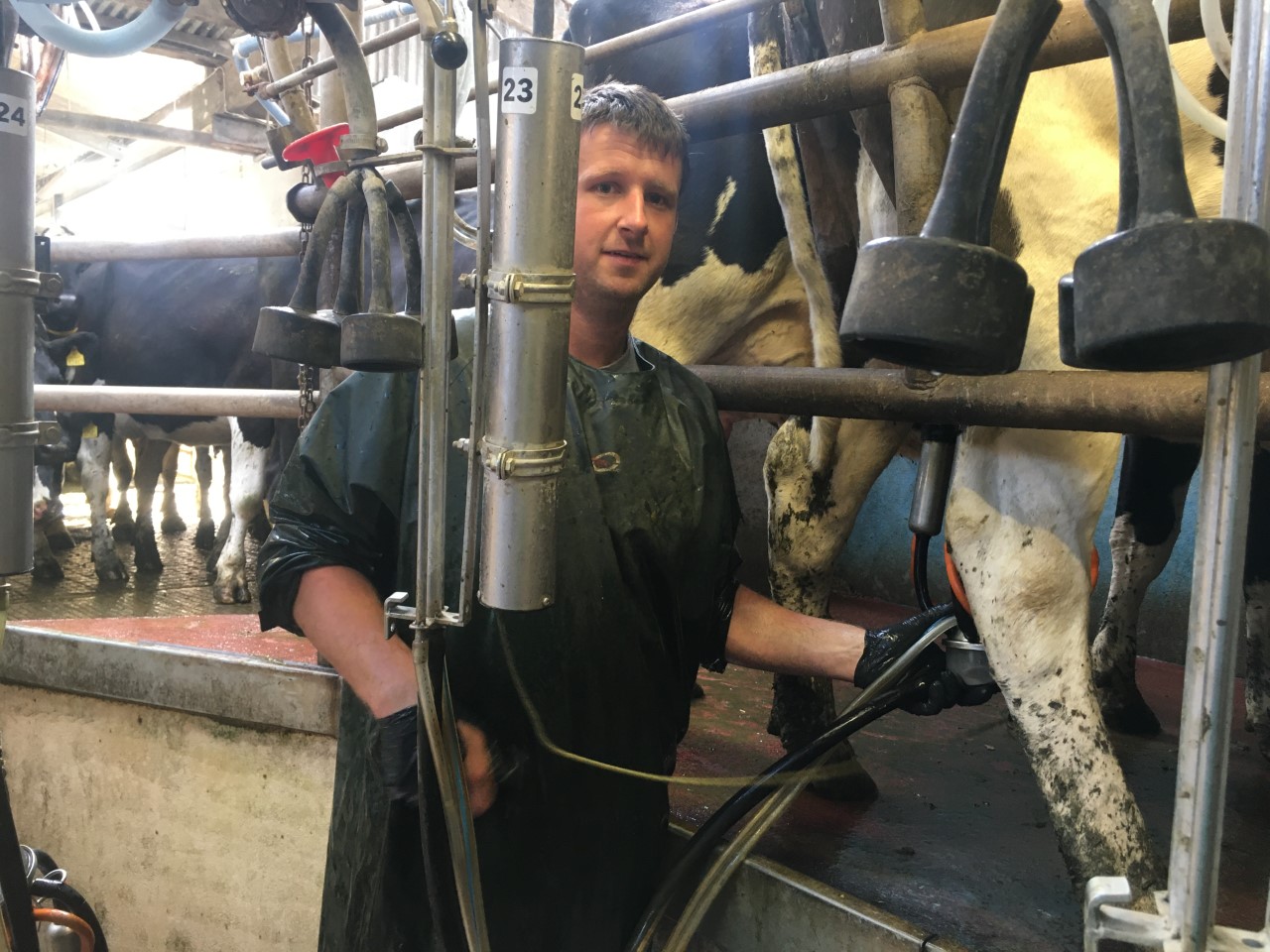 Eoghan said that a big part of their farming week is to walk the farm twice-a-week to see what grass supplies are on the farm.

He added: “My father would generally walk the farm and grass measure. He would get out twice-a-week. There is a big block of land to walk through, so the only way to keep on top of the grass is to go out and physically walk it.

“We are particular about where we put the cows and what covers they are going into. We try to target pre-grazing covers of 1,300-1,600kg DM/ha.

“We have 20ac of ground burned off for reseeding, so we hope to get going at that next week. We do all the reseeding work on the farm. We try to do a bit every year because we can see the benefits of doing it and how the new reseeds outperform the older pastures.”

Eoghan noted: “If we felt a paddock was borderline, we would go in and pre-mow it. We find that we get good cleanouts when we pre-mow.

“Any covers that are over 1,800kg DM/ha are usually taken out and baled. As you can imagine, the fact we include silage in our TMR, we go through a fair few bales of silage, so when the chance presents itself we take it to make bales.

“We generally take three cuts of grass for winter feed. We got our second-cut saved about three weeks ago and we hope to get going at the third-cut in late August.” 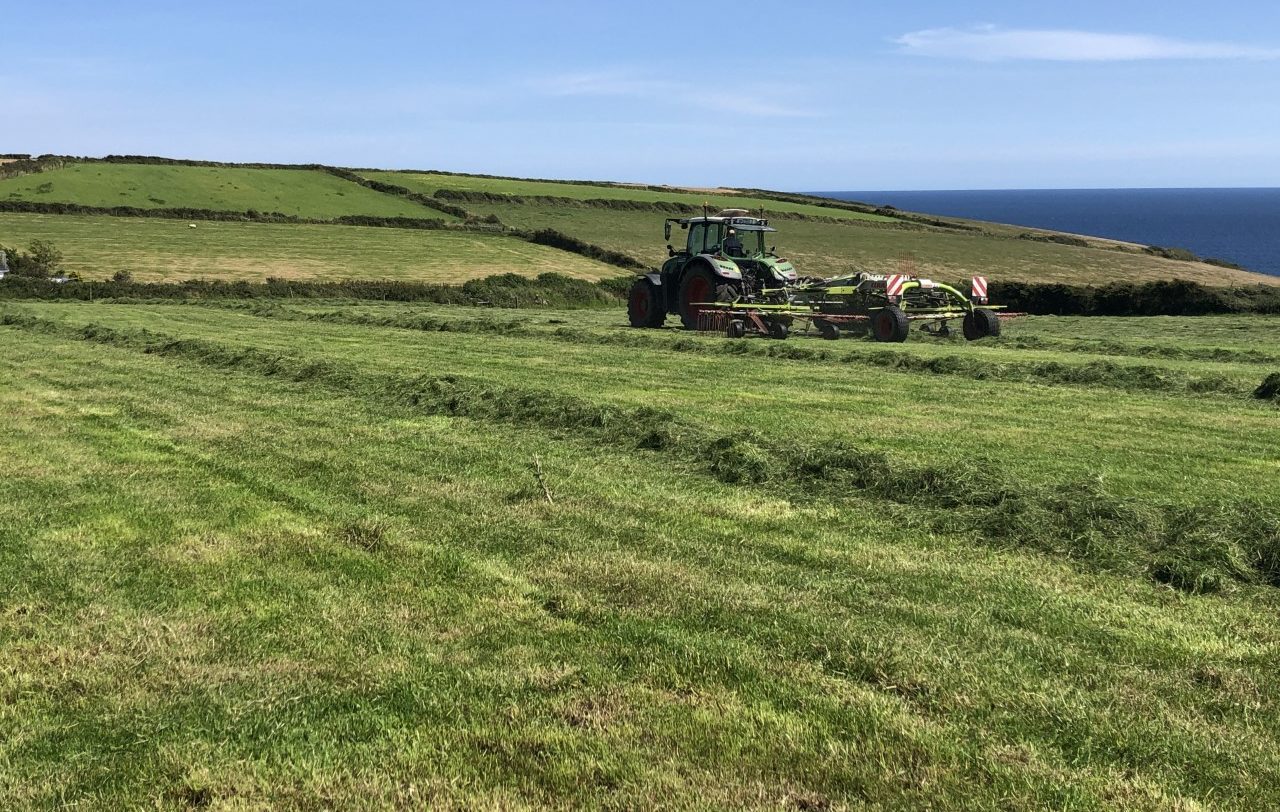