Dairy focus: Making the switch from Simmentals to Friesian cows in Co. Offaly 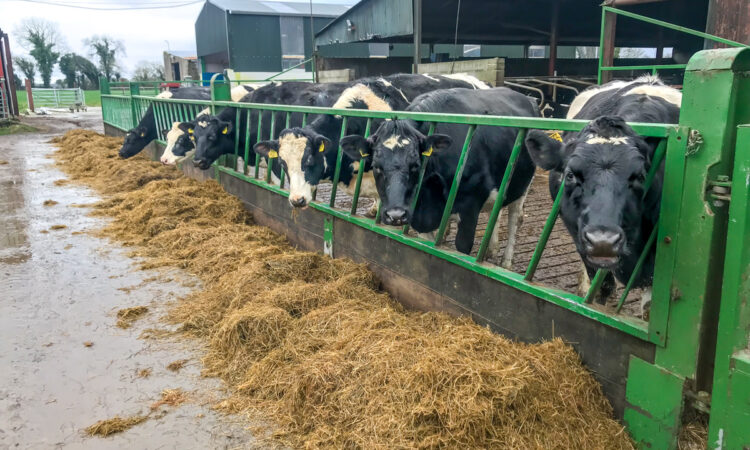 Farming just outside Edenderry, Co. Offaly, Declan O’Brien and his wife Kathryn are in the final stages of converting from a beef enterprise to a dairy operation.

Unhappy with the margin he was obtaining from the suckler operation, Declan decided to go down the dairy route in search of more lucrative pastures.

However, this idea was not just thought about over night. After a period of time spent working in Australia, Declan returned to the home farm, where his father, John, was milking cows in a four-unit, one-sided parlour.

At that time (2001), the decision was made to switch to suckler farming and Declan built up a herd of 60 Simmental cows and sold their offspring aged 12-14 months.

AI was carried out for a number of weeks followed by a Simmental bull. Declan bred these Simmental cows from the original Friesians that were milked on the farm.

Despite this, Declan – who works full-time locally – was not receiving a reward for the hours he was working on the farm.

“I was in the yard at 6:00am in the morning and between AIing and calving, sometimes I was not back in until 10:00pm at night and I now have three young children. So, I said to myself, I’m going to have a go at dairying.”

Therefore, Declan saw his opportunity with quota removal and put the wheels into motion. Declan’s father signed the farm over to him in 2013, but still lends a helping hand.

“In fairness my father, he always encouraged me to do whatever I wanted to do; he never said no. And that’s exactly what I needed,” the Offaly man explained.

Preparations began three years ago and cubicles were installed in the slatted house. This shed was home to the sucklers during the winter months and was equipped with a lie-back area for calves.

Since then, two additional slurry storage tanks have been built. One in the collecting yard, where the cows will stand prior to milking and the other adjacent to the cubicle house; this will be roofed in the near future with an extended canopy to keep silage dry.

Two years ago, things really started to get real. The Simmental cows and their progeny were sold and replaced with 30 purebred British Friesian – high EBI – heifer calves; these were aged four-to-six weeks and sourced from Co. Kilkenny.

In addition to these 30 calves, another 12 Holstein Friesian heifer calves were bought in. 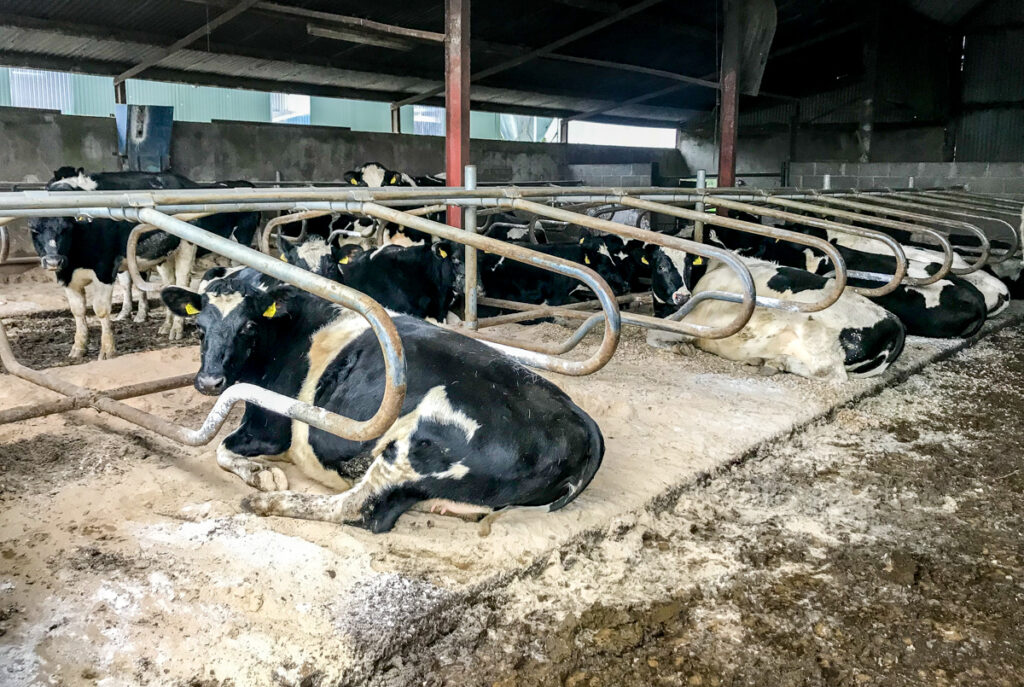 “What I was looking for was fertility and milk and I’m happy because 42 out of 42 are in calf; so, I must be doing something right.

“These are in calf to a purebred Friesian bull with 1% for calving difficulty and I’m hoping there will be no problems.

“These heifers have progressed nicely and calving is due to commence during the second week of February, when 25 of the 42 are due. The remaining cows will calve within a six-week period.”

Declan hopes to keep a number of replacements and these heifers will be contract reared off-farm.

“I’m also going to AI a number of cows with Wagyu sires and sell these to my cousin. So, I will AI whatever comes bulling first to Friesian, but I’m also exploring the sexed-semen option.

“Then I’ll use Wagyu and clean up with a Limousin bull; that way I will have a little bit of value on the calves,” the Offaly-based farmer said. 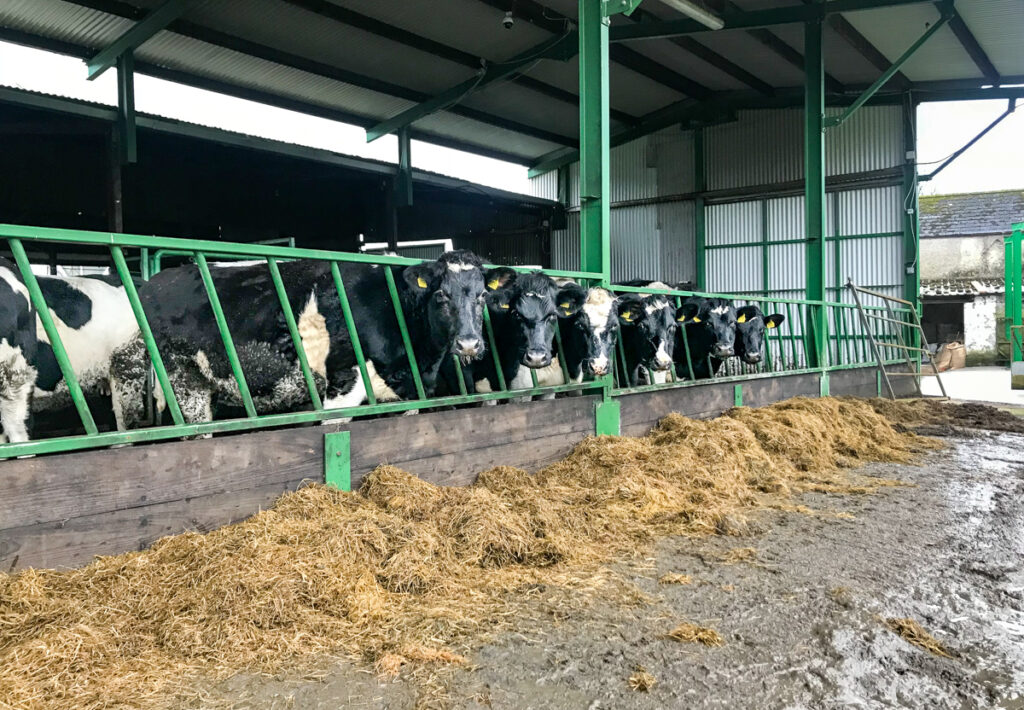 Declan is currently in the market for eight cows; these will help when it comes to running the freshly-calved heifers through the parlour.

The O’Briens are putting the final touches to the parlour and Declan hopes to train the heifers before calving commences.

“I am a little nervous even though they are lovely and quiet, but I just want to get them trained up before calving,” he explained.

When Declan decided to convert the farm to dairy, he concentrated on keeping costs to a minimum. A secondhand, 10-unit, DeLaval milking parlour was sourced from Co. Cavan.

A silo and automatic feeding system was bought from a farmer in Co. Wexford. In an effort to keep the costs down, Declan constructed all the steel work in the parlour himself; he also built the shed over the parlour.

“It worked out good and I’m delighted with it for the small money it cost. I could have gone down the grant route, but then I’d have to go for planning permission and all the other things associated with the grant.

“The sucklers covered the cost of the heifers and the milking parlour. And, I saved a lot doing most of the work myself during the weekends and evenings.”

A bump on the road

Originally, the plan was to milk 60 cows on the farm. Unfortunately, Declan lost the access to land he had taken beside the farm.

So, therefore, only 42 cows can be carried on the 68ac grazing platform. However, Declan is open to the option of expansion in the future if land became available and there is space for an additional two units in the parlour.

“I had intended giving up my job and going milking full-time, but when I lost the land up the road I said I’d scale back cow numbers; I was lucky that I’m able to work 9:00am to 3:00pm.”

Over the course of the last five years, Declan has reseeded 100% of the farm, with specific attention being placed on phosphorus (P), potassium (K) and pH levels.

A paddock system was also implemented and improvements were made to existing roadways. A water system was in-use on the farm, but Declan upgraded the troughs and installed faster nozzles.

“I have top-quality bales that were taken off the grazing platform last year; so, if it gets wet or if paddocks are in danger of getting ploughed up, these will be fed to the cows. But, the plan is to get the cows out to grass when they calve.”

Declan spent many years building up his suckler herd. However, it did not make financial sense to continue, but he didn’t make the decision lightly.

Touching on this, he said: “I didn’t want to stay at the beef for the effort I was putting in; I was not getting rewarded for my work, but I loved the suckler cows.

“If I was making money off them, I would have loved to stay with them. I bred them all from our original Friesian cows with a Simmental bull and they were a nice herd of cows.

“I was able to manage them here myself – an hour in the morning and an hour in the evening. But, I’m happy enough, I like the British Friesian; they are very placid,” he added.

“As a man said to me once, a bad year in dairy is a good one in beef, so I’m excited with what lies ahead; time will tell I suppose.

“I’m going to work away at it now. I’ve two sons and one daughter coming behind me, but I won’t be encouraging it. If they want to, they want to. I won’t be pushing them towards it,” he concluded. 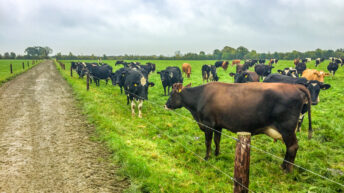 Dairy focus: Achieving a lifelong ambition on a greenfield site in Co. Offaly