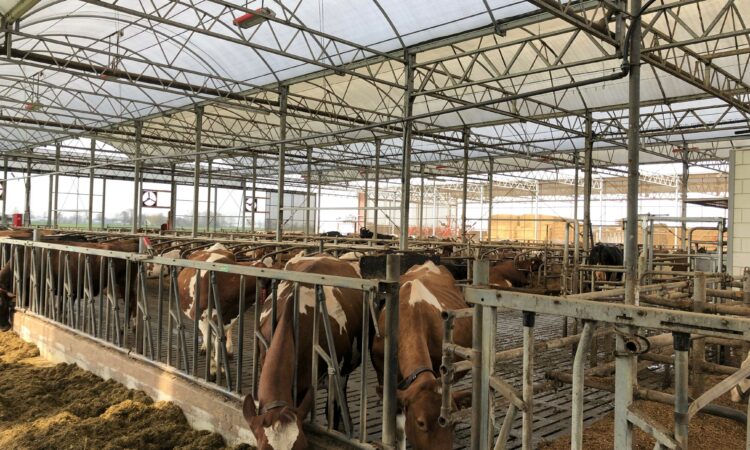 After making the decision to switch to a fully automated farm in 2008, the Oostdam family have doubled their production and kept labour the same – today, they produce over 1.3 million litres of milk annually.

As part of the Lely journey tour, AgriLand traveled to the Netherlands to see the performance of some Dutch dairy farms under the robotic milking system.

During the tour we visited Oostdam farm, a traditional family run farm passed down through generations to now being run by husband and wife duo, Jorden Oostdam and his wife Yvonne.

Yvonne is the main labour unit on the farm while Jorden works in land management consultancy five days-a-week.

However, the farm contains a number of automations to help with the day-to-day running of the farm.

In 2006, Jorden and Yvonne wanted a change for the farm. They both felt that the farm could achieve more, as Jorden stated: “It was always running and running but still remaining the same.”

With this in mind, they began looking for another goal for the farm. They explored other options and even thought about relocating the farm so that they could earn a better livelihood for themselves and their children.

“We looked at several places all over Europe and asked ourselves what is for us or what will work for us.

“At the end we decided to stay in the same place, in the green part of Holland, and double our milk production, but keep the labour the same. That was our goal.

“We looked at several farms with robotic and conventional milking systems, to find out what we could do differently with regard to labour and to see if we were going to have to employ labour or invest in automation. 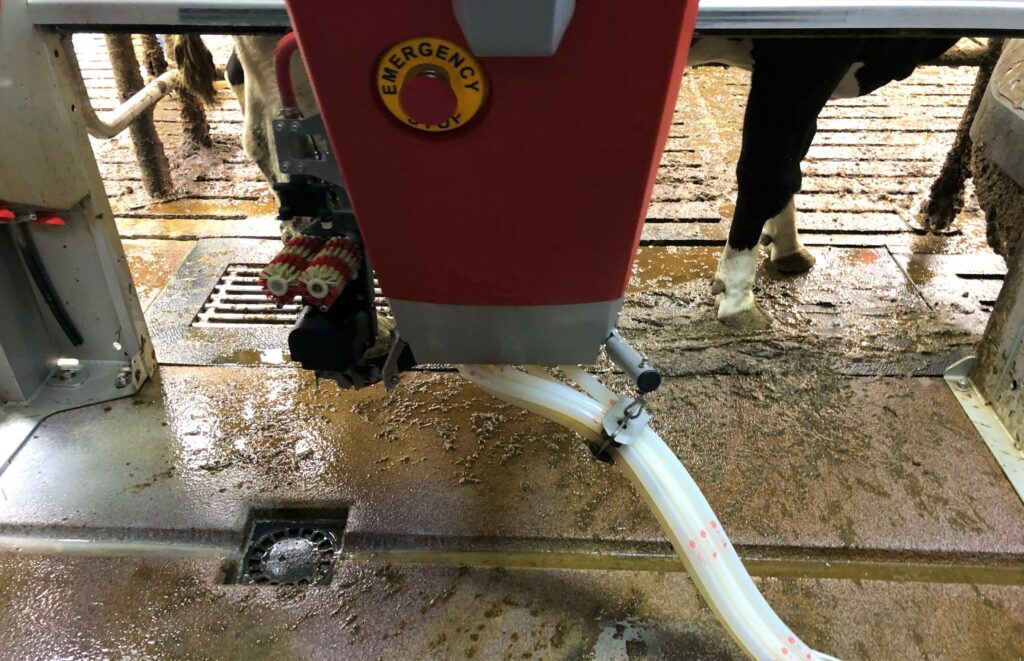 “We believed in the work of the milking robots, but we wanted to see could we work with the robots – that was what we wanted to discover.

“During our search we discovered that the robotic farmers had another way of managing and farming than the conventional farmers.

“The conventional farmers had a lot of work – twice a day – in a short space of time; which isn’t that bad but 14 times-a-week is a lot of work.

“In comparison, the robotic farmers had more time and it was easier for them to talk to you. This is what made us decide to choose robotic milking.”

As part of their plan to increase production, but keep labour the same, a new ‘barn’ was built on the farm. The new barn is unique in that instead of being covered with a sheeted roof, it is covered with a heavy duty plastic cover – with shaded areas over the cubicle beds to block out sunlight.

“In this part of Holland we have a peaty soil which means you can only grow grass. It is also a very soft soil which means in the winter we can’t go onto it with tractors or livestock. So we decided that it was best for our cows to stay in all year round in the barn,” highlighted Jorden.

The new barn includes 150 deep-bedded cubicles which are bedded with dried horse manure that they collect from some nearby stables.

The barn also has a Lely discovery for scraping manure off the slates, as well as a Lely L4C (light for cows) lighting system for longer daylight hours. 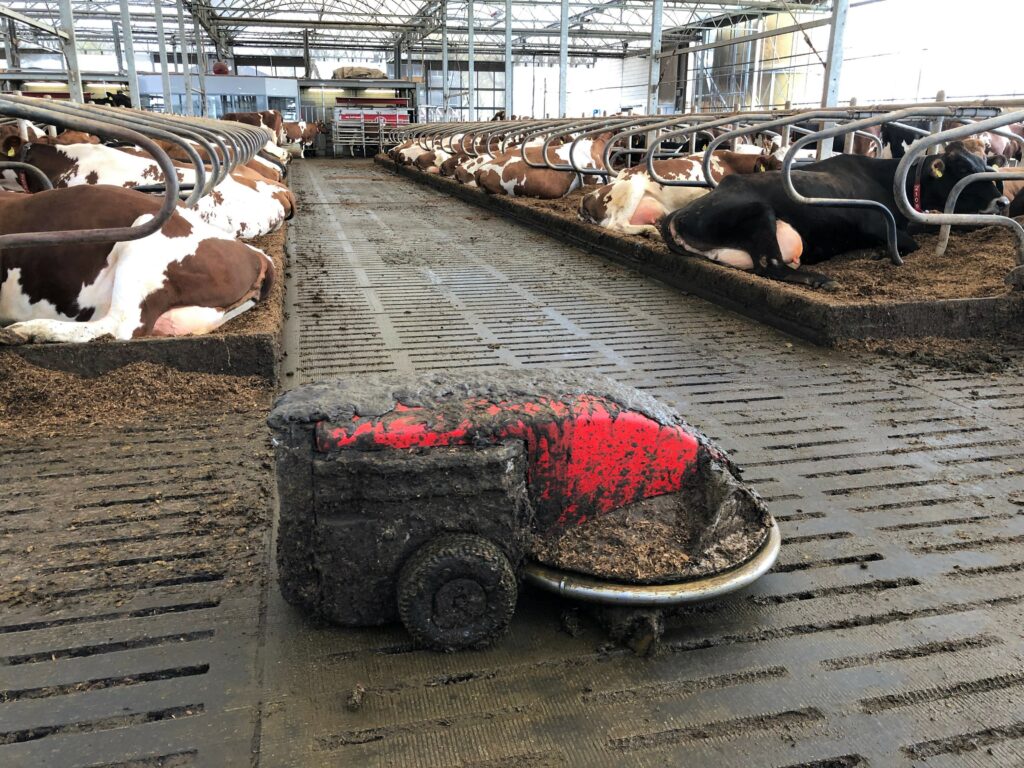 “There is a lot of space for the cows to move around and lie down because if you treat your cows well they will treat you well,” explained Jorden.

Along with the heavy-duty plastic roof, the shed has the ability to drop down plastic side covers in the event of strong winds and if temperatures drop “below 0ºC” which is about “5% of the time”.

“In the Netherlands, cows are usually inside rather than out in the fields which is a big issue. For example, our milk company will pay us 1.45c/L more if we let the cows out onto the fields during the summer time. But, we still think this is too little of an incentive for us to do this.

“We find that the cows are easier to manage and feed when they are inside. It is healthier for the cows too because they are fed the same diet almost all year round,” expressed Jorden.

Just like a lot of Dutch farms, the Oostdam farm operates a year-round calving system.

The calving facilities are located at the entrance to the shed so “a cow calving is the first thing you see when you enter the barn”. 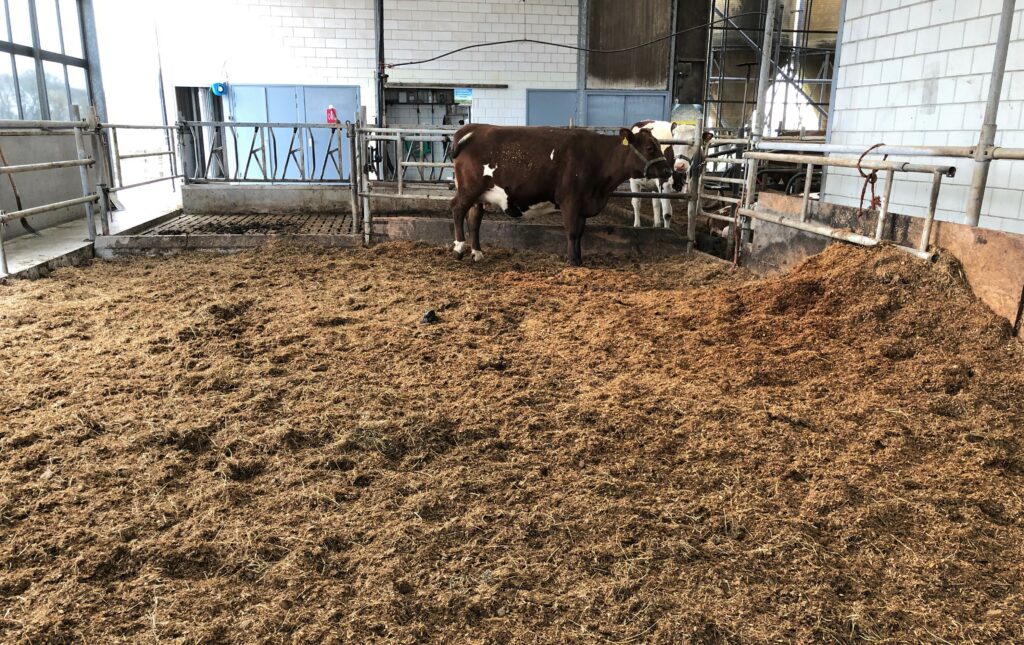 Once calved the cow is introduced to the robot but she “still has access to the bedded area to rest if she likes”. The calf is removed to a single pen, before being moved to a group pen where they are trained onto the Lely Calm calf feeder.

“The cows are mainly red and white Holstein, but we do a three-way cross with Montbeliarde and Scandinavian red as well. In the past, we used Brown Swiss so you can see a lot of different colours in the herd today.

“Our aim is to have a cow with optimum production, not maximum production. We want cows that need little attention from us; so they must be strong, have good feet/legs and show that we feed them well.

“We have a replacement rate of about 20%. About 40% of the herd get semen for milk production and the rest get a Belgian Blue bull,” said Jorden.

The herd’s diet remains the same almost all year round. It includes 9kg of silage, 5kg of maize, 1.5kg of brewers grain and 1.5kg of concentrates, with an additional 15kg of concentrate fed in the robot per 100kg of milk.

Explaining the forage management of the farm, Jorden said: “We doubled our production, but we kept the land area the same – so we don’t have enough feed and we have too much manure which both costs us a lot of money. 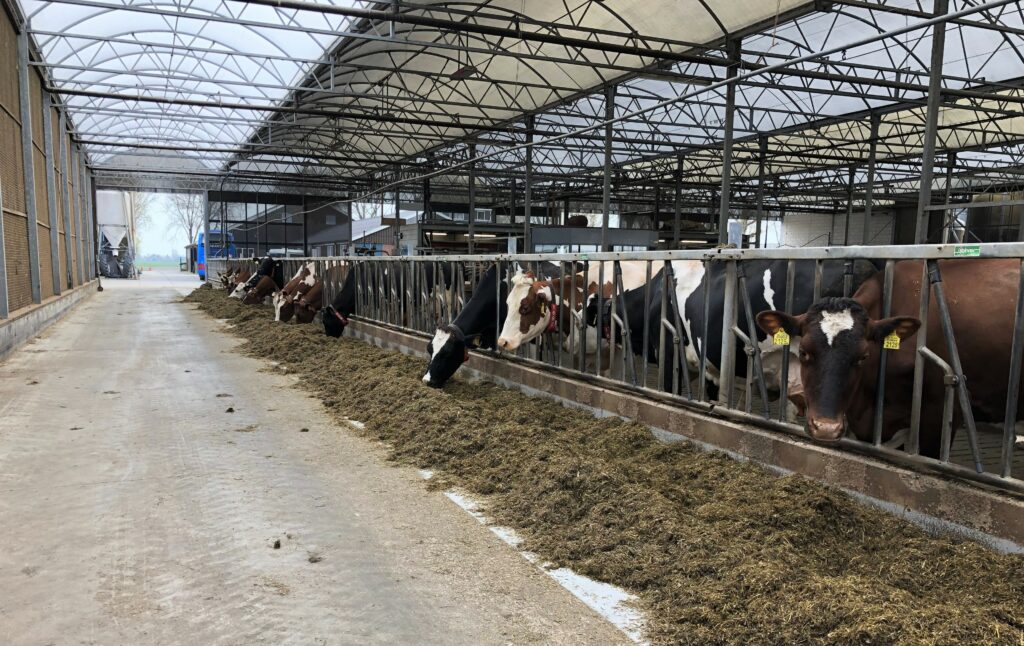 “However, it is cheaper to export the manure and buy feed than it is to buy more land because it is quite expensive here to buy land. We would if it was our neighbours land but if we have to drive 5km or 10km away, it is just not worth it for us.”

When questioned about the slurry regulations for the farm, Jorden explained: “We are allowed to spread about 60m³/ha and we have to use a slurry injection system, but we can only spread between February 15 and September 1 on grass.

“We cut our fields five times-a-year and in a normal year the production is about 14-15t/ha. Our maize is bought in along with the meal.” 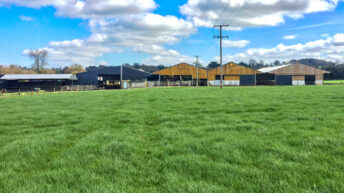