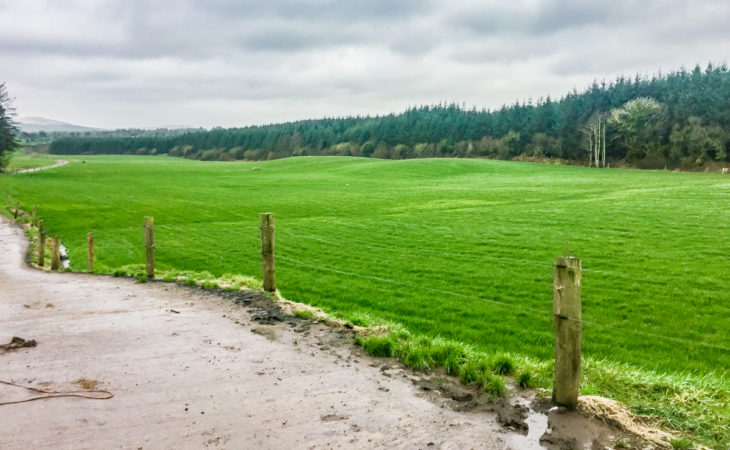 Farming near Kilnamartyra, Co. Cork, Andrew Dineen has grown his herd from 70 to 102 cows. At the same time, production has been maintained and over 550kg of milk solids were produced from each cow in the herd last year.

Giving a background to the farm, Andrew said: “Initially, the farm consisted of 65ac (adjusted) and I was given the opportunity to rent a parcel of land away from home in 1995. There was quota with it, so I rented it.

“There was 15ac in that block and I used it for silage. Over the last three years, I rented a farm alongside me. This farm belonged to a good friend of mine who was a suckler farmer.

“He didn’t see any money in suckler farming and he was also working off-farm. I decided to rent it and there’s about 60ac there under a long-term lease,” Andrew explained when AgriLand visited his farm recently.

Despite the parcel being adjacent to Andrew’s milking platform, it was far from a ‘turn key’ addition and a considerable amount of work was needed to bring it up to scratch to graze dairy cows.

It was in poor repair and it took three years to take it from where it was to where it is today. Mike, the owner, drives a digger and we worked together to bring in 33% every year. We had to put in roadways, reseed and fence.

“I would have preferred had it come in a little bit faster, so that I could get a quicker return from my investment and stock the farm quicker. But, that’s the way it happened and it worked out OK.

“Between drainage, rock breaking and roadway construction, there was a phenomenal amount of hard work involved. 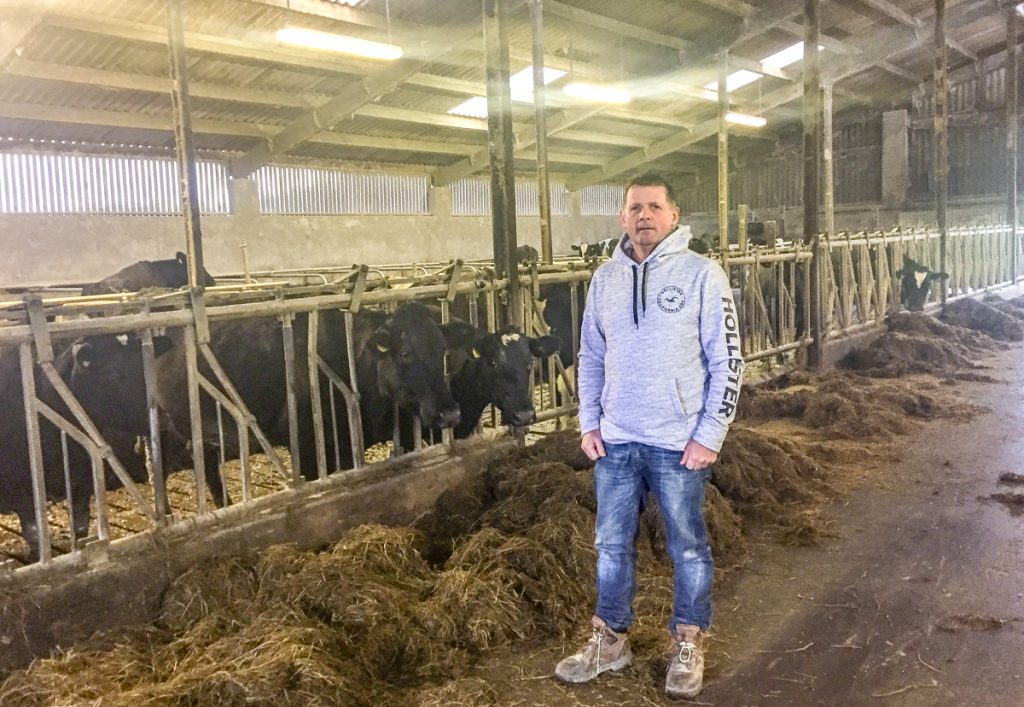 “A group of students visited from Moorepark two years ago and they’d never seen anything like the ground we were trying to bring back into grassland. We had to turn a bog and let the remnants rot down before we even tried to till it.

“In the region of 20ac came in every year and the herd expanded from 70 to 102 cows. The stocking rate fluctuated all of the time because there was bits of ground coming in,” Andrew said.

Like so many dairy farmers throughout the country, Andrew’s business is driven by grass. Last year, 10.5-11t/ha of grass was utilised by the milking herd.

“It’s not Moorepark land we’re farming, but it’s not a bad level of performance for our type of ground. We’ll begin calving on February 7 and, as soon as the weather allows, the cows will go out. If it’s only for 60 minutes, they’ll be out grazing for 60 minutes.”

Given the nature of the farm, which is located in a severely-disadvantaged area, he has placed a major focus on grazing infrastructure.

“We are really under pressure in the spring and we need good roadways and paddocks. There’s two or three entrances into every paddock to try and limit damage. 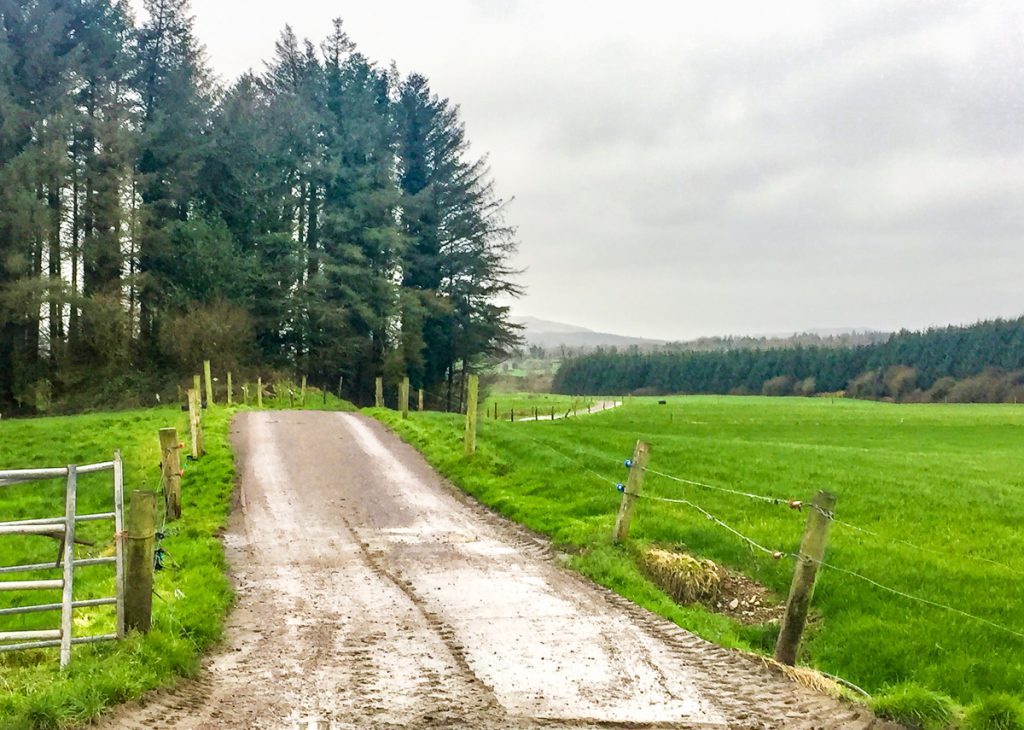 “With the addition of the new farm, cows are walking over 1.5 miles and we invested a lot of money last year putting in a roadway. It extends to 0.75 miles and it just had to be done because of the distance.

We needed to extend that roadway a bit further, but it’s been a huge help. The cows actually reach the parlour about 10 minutes faster now and we’ve a lot less lameness.

Towards the latter end of last year, the cows were walking up to 1.7 miles. To alleviate some of the associated stress, Andrew decided to go once-a-day (OAD) milking in mid-November.

The cows were kept at grass until December 15 and a small proportion of zero grazing was undertaken to manage covers on some of the heavier paddocks on the farm.

Another key area that warrants consideration is soil fertility. On this, Andrew said: “Soil fertility has been a big issue over the last number of years; especially on the 60ac of ground that I have rented.

“The fertility on that farm is low and it’s going to be two or three years before we get it really performing. How much grass I can grow will really determine how many cows I will milk going forward.

We will continue to scrape a bit of rock, turn a bit of bog and try to make more ground going forward.

Last spring also marked another key stage in the farm’s development, as Andrew contracted out heifer rearing. This allowed him to focus solely on the milking herd and, he said, it simplified the system greatly. 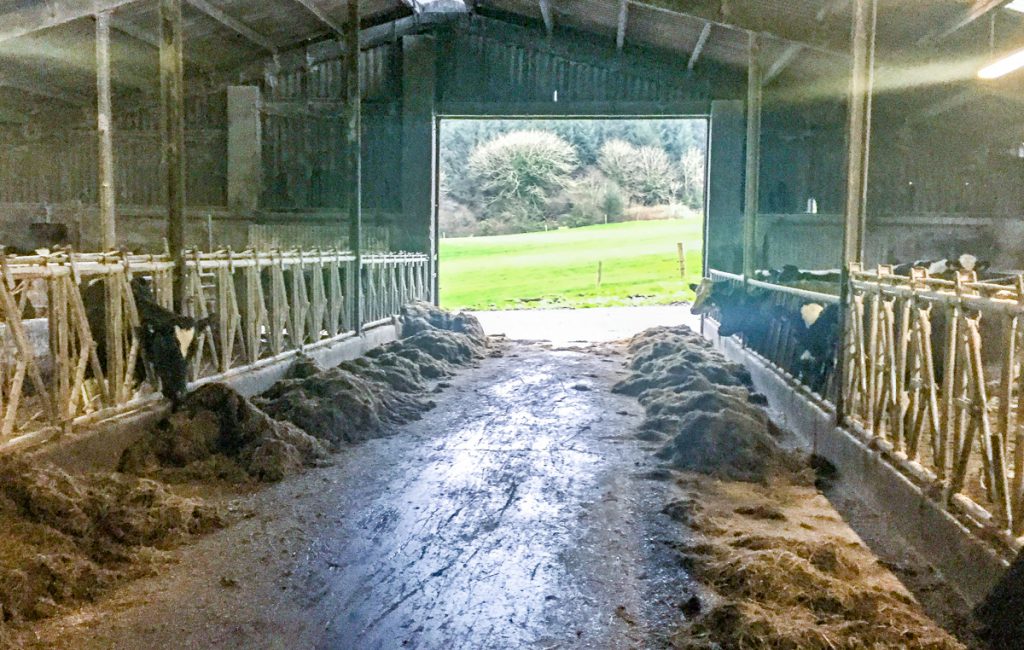 “Contract rearing is fantastic. Now I’m dealing with one group of animals and I am getting good performance from the cows. I’m hoping that good performance will help improve the overall profit of the farm.”

Approximately 70% of Andrew’s herd are crossbred and 556kg of milk solids (4.64% fat and 3.84% protein) were produced by each cow last year. His herd is firmly within the top 1% of the herds in the country in terms of EBI (Economic Breeding Index) at an EBI value of €159.

“The cows did 556kg of milk solids last year, which I’m very happy with. I was fearful that I would lose performance with expansion. For me, if that was the case, it made no sense to expand.

“There’s no point in doing 500kg of milk solids and dropping down to 450kg when you’ve expanded. It’s not easy to maintain performance and we can all get production if we feed a lot of ration.” 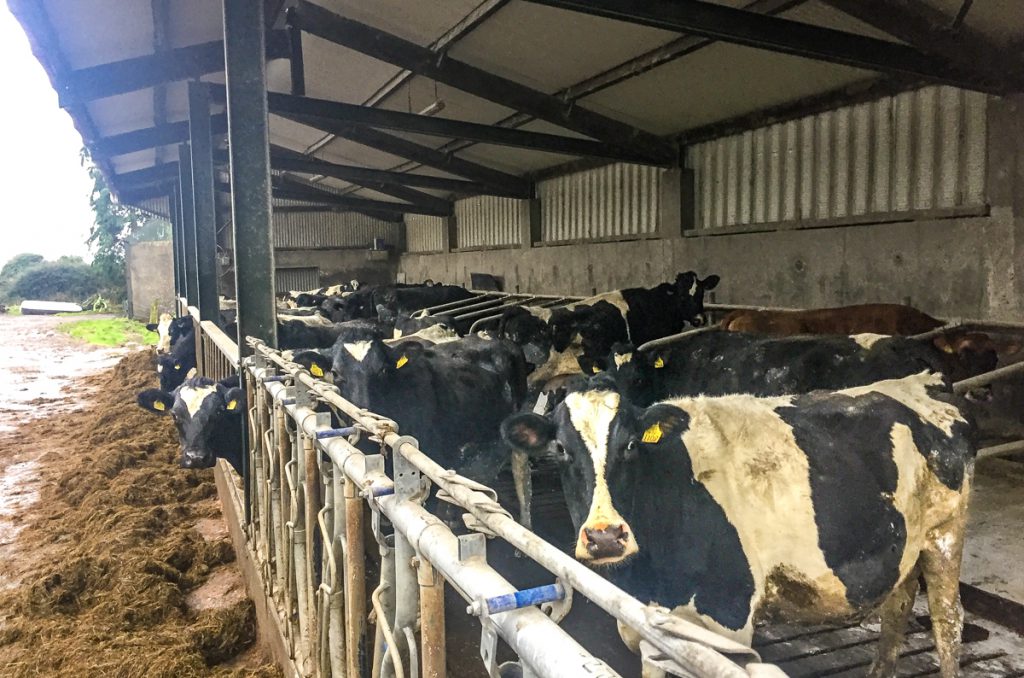 Last year, Andrew fed 800kg of concentrates to every cow in his herd, adding: “I’d feed a bit more than the conventional crossbred farmer, but most of them are only doing 400kg of milk solids.

Although Andrew was happy with the performance achieved by his herd last year, he felt that he could have milked a few more cows.

“I run a closed herd here and I’m very slow to buy in anything. I will probably go to 110 cows this year.”

And, even though solids production was exceptional, the Cork-based farmer was a bit disappointed with the fertility performance of his herd.

Calving is due to kick off on February 7 and 77% of the herd is due to calve in the first six weeks – down from 80% last year. However, 24 out of 25 heifers synchronised on the farm held to the first service.

Andrew was first introduced to crossbreeding by Teagasc’s Frank Buckley. Originally, he was milking a herd of high-yielding black and white cows. 70% of the Cork man’s herd are now crossbred; the remaining 30% are Holstein Friesian.

Over recent years, he moved back to genomic sires in a big way. However, after seeing the calves on the ground, he felt like they were something that was there years ago. 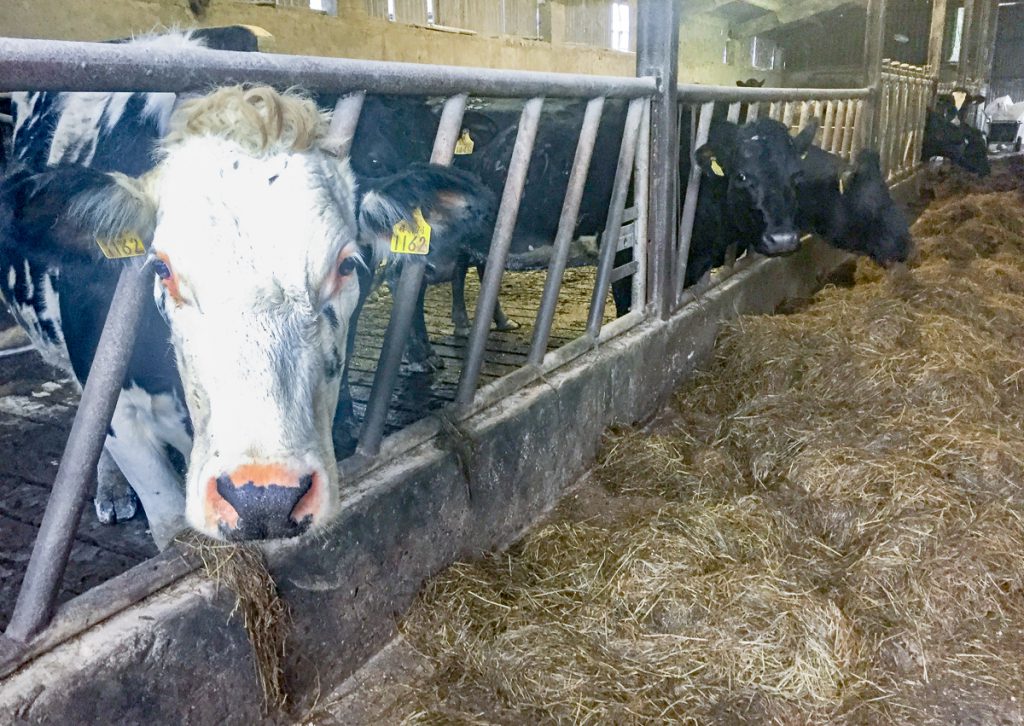 “Not all of them were like that, but I just thought they were tall and leggy. I went crossbreeding to try and get a more compact cow rather than a tall, heavier dairy cow.

I am not discrediting genomics and I think it’s a tool that they’re still learning from. However, there’s huge variation in genomics when those specific bulls are proven and have daughters on the ground.

“Genomics is obviously the way forward, but I just don’t like the inconsistency that happens when you use a genomic team of bulls.

“On average, they’ll probably do what they say they will do. But there’s massive variation between all of the daughters.

“When you’ve a very high genomic bull for milk, SEW as an example, there was a lot of SEW used on low-production cows and maybe that’s the reason why they tell us to use teams of bulls.”

With last spring’s blip in genomic bulls’ EBI values in mind, Andrew is now focusing on using Jersey and crossbred bulls to breed the next generation of his cows. Calves after bulls such as PSQ and JE4270 are expected to hit the ground in the coming weeks.

Touching on why he went down this route, he said: “The EBI of genomic bulls was €100 more than the average daughter-proven bull. But, when they dropped, they were only €61 higher.

“If I stayed with hybrid vigour, I was getting that €100 increase in EBI and it was a safer bet to go back to crossbreeding my black and white cows. With genomics, when they did fall back, I was only getting a €61 improvement,” he said.

The importance of discussion groups

Andrew is involved in the Kilnamartyra Discussion Group and, to him, it’s probably one of the best discussion groups in the country.

“Geographically, we are all located very near and there’s super guys involved. They’re all farmers who will challenge you and will tell you if you are doing something wrong.

“It’s great and you respect them for that. I call these guys my best friends because, as a group, we go away together. For the past four years, we’ve headed away – which we thought would never happen – we’ve been to Holland, Scotland and France and a few guys went to Austria this year to look at farming practices.

It’s vitally important and anyone who is serious about farming should join a discussion group because you’re living in a bubble otherwise.

Andrew added that the discussion group played a huge role when it comes to future plans on the farm. He added: “I am actually in the process of building a new parlour at the moment. 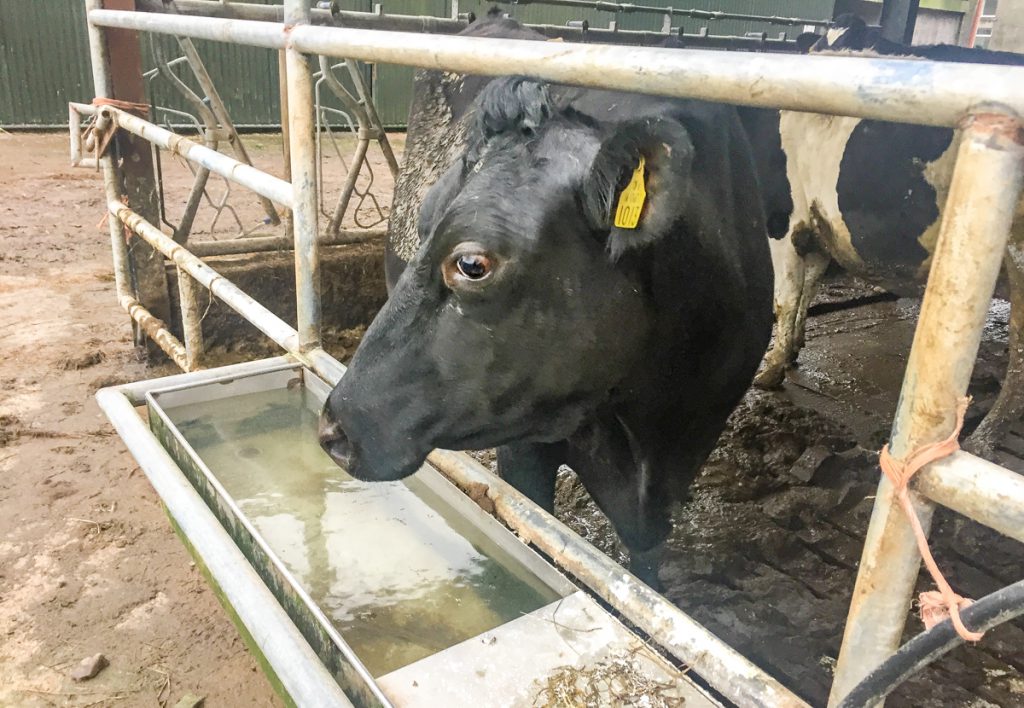 “We’ve applied for planning and we hope to start construction in March. I was humming and hawing about where I was going to put the parlour and I asked the group for their opinion and they suggested building it away from the existing parlour.

“I thought their honesty and experience put me in the right direction and I took their advice. They also advised me to get planners from Grasstec out to see what they think and I did and they’ve been fantastic.

“The guys in Grasstec have a lot of knowledge and they’re experts; I’m a farmer. We have plans to put up a 20-unit GEA milking parlour in the next couple of months.”

Andrew and his wife Anne have five kids – ranging from 19 down to 11. He credits his wife and son Aaron as being a major help around the farm; especially when it comes to the busy period.

“Aaron has been brilliant and my wife has been fantastic; they both help me in the calving season. I also get a bit of help from a neighbour when things get busy. The breeding season is short and there’s a lot of cows calving rapidly.”

Andrew also places a major emphasis on the importance of relationships; especially when it comes to landowners and contract rearers.

They are two great guys and we’re good friends. Sometimes when you deal with land and money, it can go sour. But, you have to be fair and honest and these guys have to make money too.

“If you are trying to grab everything yourself and leave them short, the relationship simply won’t last. A bit of openness can sometimes go along way. If there’s honesty there, I don’t think there will be a problem,” he concluded.