IDB market returns back 25% since January 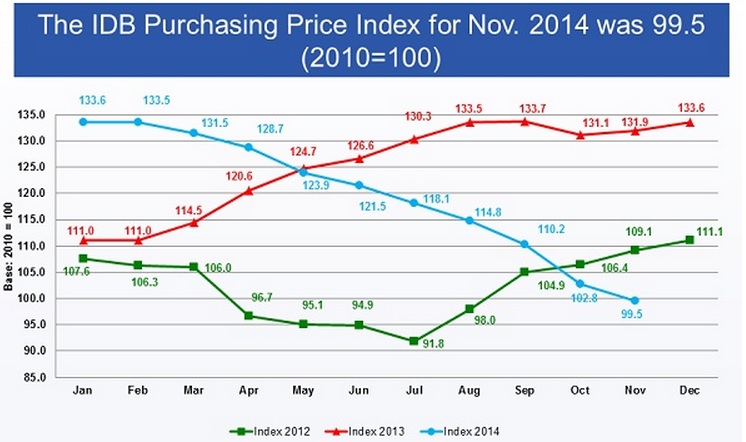 The Irish Dairy Board’s (IDB) Production Price Index (PPI) for November was down over 2.4% on the October return remains at its lowest level since August 2012.

The Index has fallen for the past 10 months, with falls over that period totalling over 25%. This follows on from a fantastic 2013 for dairy returns, with the Index having only fallen once in 2013.

November’s result is also some 24% behind the same month last year. The result comes on the back of prices paid at last week’s Fonterra dairy auction being down by 1.1%, compared with those recorded at the event held late last month.

The IDB released its monthly PPI this week and it showed a return value of 99.5, which indicates a 0.5% decrease in market returns when compared to 2010.

This week also saw negative news for dairy markets with the giant New Zealand dairy co-operative Fonterra announcing it has reduced its forecast farmgate milk price for the 2014/’15 season from $5.30/kg MS to $4.70/kg MS (€37c/kg)

When combined with the previously announced estimated dividend range of NZ$ 25-35c/share, this amounts to a forecast cash payout of $4.95 – $5.05 for the current season.