Rising dairy cow numbers have driven an increase in the number of calf births this year, new figures show.

Data released by the Irish Cattle Breeding Federation (ICBF) shows that nearly 1.82 million calves have been registered on Irish farms this year – an increase of 3.5% or 24,599 head on the the same period in 2016.

The majority of this increase follows a jump in dairy calf registrations, which are up by 40,848 head or 3.5% so far this year to reach 1.21 million head.

However, a change appears to be happening at farm level as there has been a noticeable drop in the number of beef calves born on Irish farms.

The latest figures from the ICBF show that 601,586 beef calves have been registered on Irish farms so far this year. 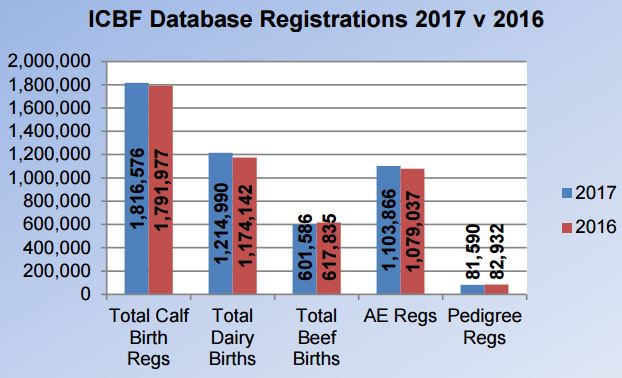 Figures from the Central Statistics Office show that there were 11,200 fewer suckler cows in Ireland in December 2016 than in the same month in 2015.