Cull cow prices have eased slightly on the back of increased throughput over the past two weeks.

The plainer dairy type cows have been hardest hit, with prices for P grade culls falling by 5-10c/kg.

Farmers selling P grade cows are currently being offered 300-310c/kg, while the same cows were making between 310-315c/kg last week.

A number of procurement managers told Agriland that there is ‘no shortage’ in the number of coming stream.

And as a result, O grade cow prices have also eased by 5c/kg. The majority of processors are now offering 320c/kg, down from a top price of 325c/kg last week.

However, the prices being offered for R grade cull cows has remained relatively stable, with most procurement managers offering 350-355c/kg for these lots.

Prime cattle continue to remain in demand, on the back of a lower beef kill over the past two weeks.

However, procurement managers added that it is a little easier to secure stock as a ‘small number’ of grass cattle are starting to appear.

Supplies of steers, heifers and young bulls have remained relatively unchanged over the past seven weeks, resulting in a sub-30,000 head kill.

Along with a relatively stable supply of cattle, the price of prime cattle has also remained unchanged from last week.

Most factories are now offering a base price of 400-405c/kg for steers, while finishers selling heifers are being offered 415-420c/kg.

However, despite the decline in prime cattle throughput, the number of young bulls slaughtered during the week ending June 7 jumped by 9% compared to the week before.

However, despite cattle supplies remaining relatively tight, the number of cows slaughtered during the week ending June 7 jumped by 8% compared to the week before.

According to Bord Bia, the British beef market is steady, as prime cattle are in relatively short supply.

In March, British beef farmers faced queues to have their cattle slaughtered, but in recent weeks cattle numbers of tightened.

The lower number of cattle being brought forward for slaughter has resulted in the British beef trade steadying in recent weeks.

According to Bord Bia, there is an abundance of domestic and German beef available on the French market.

It reports that sales of striploins and rumps have yet to really take off for the barbecue season, but demand remains reasonable for flank steaks, thick steaks and ribs.

It also suggests that French beef consumption continues to remain good, as the recent bad weather and flooding has not had to negative of an impact.

The Italian beef market continues to be impacted by falling consumption rates, it says.

And, the Italian R3 young bull price has been in decline in recent weeks, with prices falling to as low as €3.72/kg. 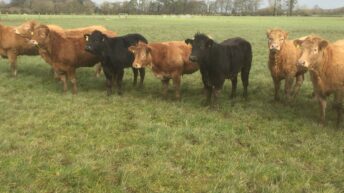