Creed confirms herds with TB history can export to China

Michael Creed, the Minister for Agriculture, Food and the Marine, has confirmed that beef from herds with a history of TB can be exported to China – as long as there has been no case of the disease within the past 12 months.

The minister was responding to a parliamentary question from Roscommon-Galway TD Michael Fitzmaurice, who asked if there would be any restrictions on beef from herds with a TB history being sent to China.

In his answer, Minister Creed said that the only restriction would be a 12-month waiting period between a case of TB within a particular herd, and meat from that herd being sent to the Asian country.

The minister said that this restriction was part of the protocol he agreed with the Chinese government, following negotiations in December. The negotiations resulted in both parties agreeing to a set of terms and conditions, he explained.

“This protocol states that the live cattle from which the frozen beef to be exported to China is derived should originate from farms where there has been no clinical cases of various diseases, including TB, detected within the past 12 months,” said Minister Creed.

He added: “Therefore, beef can be exported from herds that historically have had TB, as long as it was not within the last 12 months.”

The minister added that officials in his department were working towards applying for more beef plants to be certified for exporting to China; currently, six plants are approved to export beef to that market.

By the end of November, according to the Central Statistics Office, around 1,250t (€2.4 million) had been exported, which is an indication that companies are beginning to gain a foothold in the market.

In a separate parliamentary question, deputy Fitzmaurice asked Minister Creed if Ireland had been one of the countries effected by the recent controversy in Poland, where one abattoir was found to be slaughtering animals unfit for human consumption.

Following that discovery, meat from that plant was recalled from a number of European countries; however, the minister confirmed that Ireland was not one of them. 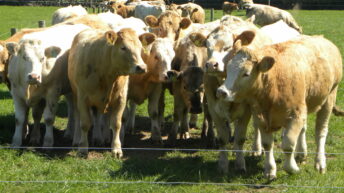