Creed and Wallace face off in fiery debate on agri emissions

Minister for Agriculture, Food and the Marine Michael Creed had a war of words with independent TD Mick Wallace on the issue of the sustainability of the Irish livestock sectors in the Dail.

Speaking in the Dail today (Wednesday, February 6) deputy Wallace quizzed the minister on whether policies to decrease the beef and dairy herd and diversify Irish farming output would be introduced.

The independent TD for Wexford said: “The meat and dairy herds are to Ireland what the coal industry is to Poland and the fracking gas industry is to the United States.” He stated that they are “a short-sighted cash generator” endangering the planet.

Minister Creed dismissed the comparison, describing it as “rather unfortunate” and explaining that Ireland is the most carbon-efficient producer in the EU in dairy and fifth for beef.

He highlighted the “comparative advantage in grass-based carbon-efficient livestock production”.

In a heated exchange Deputy Wallace described Origin Green as “starting to look like a joke” in terms of being climate or environmentally friendly.

He added that there are “too many beef farmers in the country and the Government is killing the beef farmers”.

The minister responded stating: “If the Irish agriculture sector was transposed lock, stock and barrel to the United Kingdom, France, Germany or any other industrialised country where the average profile of emissions is about 10% of its total, it would halve the equivalent of what the United Kingdom and other countries are at.”

We are leaders on our journey to sustainability. Deputy Wallace argues that the livestock sector and the dairy industry are akin to fracking or the coal industry and that we should dismantle the herd.

What would be the purpose of dismantling a carbon-efficient system that can and must do more when we would only see product displacing it on supermarket shelves with a far higher carbon intensity?

“What we must do in our production systems is become more and more efficient. We must drive down the carbon intensity per unit of output and maximise sequestration through afforestation and appropriate soil management.

“As the third leg of the three-legged stool, we must ensure the displacement of non-renewable energy sources in the agriculture sector.”

‘Going down a cul-de-sac’

Deputy Wallace accused the minister of “going down a cul-de-sac” with the Irish agricultural sector, with too much beef produced, adding that “the cold storage units are jammed with beef”.

“Is it not a by-product of the decision to increase the size of the dairy herd? One cannot get milk without cows having calves,” the Wexford TD said.

In response, Minister Creed accused deputy Wallace of “pointing fingers” in what is a “complex issue which cannot be boiled down for the purpose of a soundbite to simplistic political messages”.

However, I acknowledge the limited potential in the agriculture sector. We will squeeze out every piece of potential to drive down the carbon footprint.

Describing agriculture as Ireland’s biggest indigenous industry, he said: “It is, relatively speaking on a global scale, carbon efficient. It can and must do more and will.”

However, he said it will not close down and be displaced and replaced by “beef from South America or dairy products with a far higher carbon footprint”. 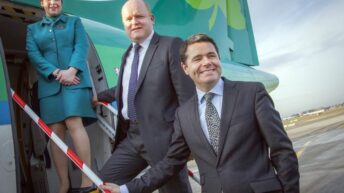