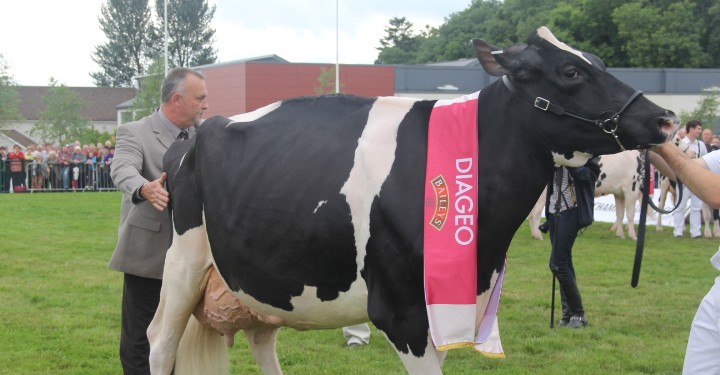 The winning cow is owned by Neal Pepper, from Dromore Co Down. The competition took place at the Virginia Show in Co Cavan – which is home to Diageo’s cream supplier, Glanbia Ingredients Ireland Virginia, co-sponsor of the event.

The competition celebrated its 30th Anniversary this year and rewards good body conformation with proven excellence in milk production. It is only the second time that a Northern Ireland breeder has won the top title, the first time being its inaugural year in 1983.

Co Down breeders, Ivan and Louise Robinson from outside Newtownards also won Best Protein Award. Croagh Susie Mist 46 owned by Pat and Derek Frawley from Rathkeale Co Limerick was declared Reserve Champion and other prizes were awarded in specialist categories for breeders that travelled to Virginia from as far afield as Co Cork and Co Wexford to compete.

Widely acknowledged as Ireland’s most prestigious dairy livestock event attracting the super-elite of the Holstein Friesian breed, the top awards in the €10,000 prize fund were presented by the Minister for Agriculture Food and the Marine, Simon Coveney TD who said: “‘The annual Diageo Baileys Champion Cow Competition held in conjunction with Glanbia Ingredients Ireland represents a highlight of the Agriculture show calendar. The production of Baileys from milk supplied from 1,500 carefully selected family farms is a phenomenal success story. Irish dairy farmers are the cornerstone of the success of Baileys and I commend the unique partnership of all involved.”

Liam Reid Corporate Relations Director for Diageo in Ireland said “the event had become the pinnacle of success in dairy breeding circles on the island of Ireland and its 30 year history was testimony to the strong supply chain partnership that exists in the making of Baileys”. Glanbia Ingredients Ireland Ltd Chairman Liam Herlihy added: “The cream of the dairy world was here today and the presence of the Minister highlights the importance of the partnership between Diageo and Glanbia Ingredients Ireland.” International judge of this year’s competition was Lynden Bustard from Devon who had the tough task of selecting the winner. Commenting on the calibre of Irish dairy breeding, he said the winner was “the epitome of perfection for Holstein youthfulness”.

A list if all the Diageo Irish Champion Dairy Cow 2013 competition winners available below.

Interview with champion winner Neal Pepper, from Dromore Co Down

This story was updated at 2.14pm with additional images in the slide show