‘UK no-deal tariff regime is by no means certain’ – Coveney 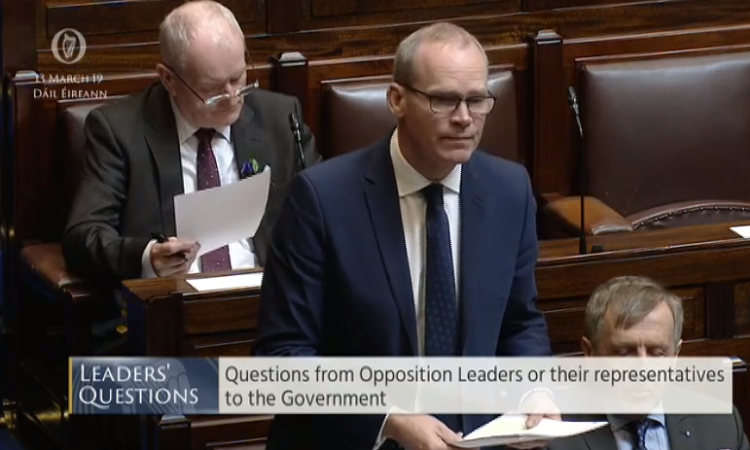 The proposals released by the UK government yesterday (Wednesday, March 13) relate only to a no-deal scenario which “is by no means certain at this stage”, the Tanaiste Simon Coveney has reminded the Dail.

Responding to a question from Fianna Fail leader Michael Martin, the Minister for Foreign Affairs and Trade said: “Our core objective is, and continues to be, to avoid a hard border on the island of Ireland and to protect the integrity of the single market and customs union.

“This doesn’t change in a no-deal scenario,” he explained.

Continuing, the Tanaiste acknowledged that: “Tariffs will have a negative impact on trade and will be damaging to businesses, farmers and consumers whether in Ireland or the UK.

We’ll study the impact of these proposals carefully together with our EU partners. However, it should be stressed that no option would be as good as is what is currently on the table in the withdrawal agreement.

The minister added that the current offer on the table provides for no change in the current tariff-free trade between the EU and the UK in a transition period and also a guarantee of avoiding a hard border and protecting an all-island economy.

In relation to state aid, Minister Coveney said: “The Government is in close contact with the European Commission on the issue of state aid supports.

“In February the commission announced a relaxation of state aid rules to support farmers.

In the event of a no-deal, the Government will look for further relaxation of state aid rules and for EU supports for businesses.

“The crisis here, the problem and the uncertainty linked to Brexit all emanate from an inability of a British parliament to be able to give a clear signal through majority support on what they are willing to support and ratify.”

Concluding, the Tanaiste said: “We will continue to advocate for a sensible deal that emerged after two and a half years of negotiation that solves many of these problems and I think – I hope – we will have a clearer picture in the next 48 hours given the debates that will take place both this evening and tomorrow in the British parliament.”