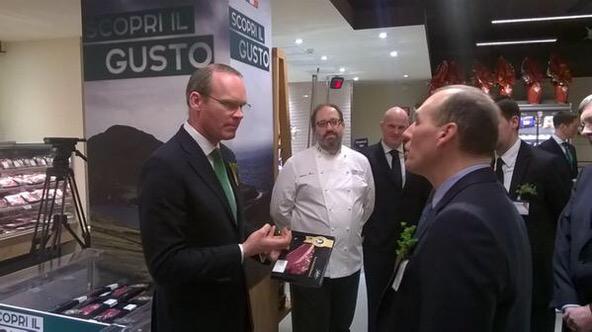 During a St. Patrick’s Day visit to Rome, the Minister for Agriculture, Food and the Marine, Simon Coveney, took time out to launch an Irish beef promotion at a leading Italian retail store.

Since March 2014, the retailer has extended this to 100 stores, with Irish Hereford beef now present in stores from Milan to Sicily.

To build awareness of the new product range, in 2014, Bord Bia Milan coordinated over 110 days of in-store promotions with Carrefour, promoting Irish beef directly to more than 35,000 Italian consumers and increasing sales by 50 per cent in targeted stores.

Speaking from Rome, Minister Coveney said: “It is a pleasure to be in Italy promoting sustainably produced Irish Beef. International trade has been the key driver of our economic recovery and the agri-food sector has played a significant part in this.

“This year, Bord Bia will invest €3.5m across an integrated marketing communications programme to continue to raise awareness and understanding of the Origin Green programme, targeting key customers of Irish food and drink in Europe. As an exporting nation, our international markets are key to the long-term sustainability of our beef sector.”

Aidan Cotter added: “Bord Bia values the support of the Minister in increasing the awareness of Irish beef here in Rome. Italy represents an important market for Irish food and drink exports. In 2014, Italy was our third-largest export destination for Irish beef, after the UK and France.

“We exported approximately 47,000t of Irish beef to Italy, accounting for almost 20% of total exports to Continental Europe. It is the main export product and accounts for 60% of Ireland’s exports to Italy, with a value of €184m”.

With just 51% self-sufficiency in beef supply, Italy is the largest importer of beef in the European Union, taking in 400,000t of beef annually. Based on 2014 figures, Irish beef accounts for almost 12% of Italy’s beef import requirement.

Part of the French supermarket chain, Carrefour, ‘Carrefour Italia’ is part of has 1,220 stores in Italy and recorded sales of $7.1bn in Italy in 2013.