The Revenue Commissioners has released its tax defaulters list for the third quarter of 2016, with farmers and agricultural contractors featuring on the list.

A total of 11 farmers failed to lodge Income Tax returns to the Revenue in the third quarter of the year. Amounts ranged from €1,250 to €10,000. 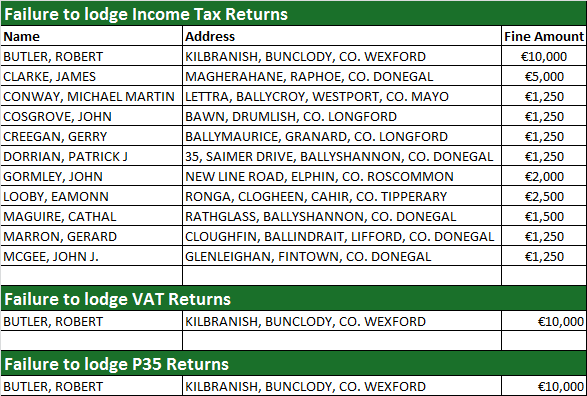 John Patrick Ahearn from Elderfordtown, Midleton, Co. Cork, who is involved in machinery sales was fined €5,000 and Roland O’Donoghue from Kilglass, Mitchelstown, Co. Cork, an agricultural contractor was fined €3,750.

These farmers were fined €2,500 each. Agricultural contractor Roland O’Donoghue was also fined €2,500 for the misuse of green diesel.

Part Two of the tax defaulters list also includes persons in the case of whom a penalty was determined by a court during the period July 1, 2016 to September 30, 2016.

This includes persons in whose case the Revenue Commissioners accepted a specified sum in excess of €12,700/€30,000/€33,000 (depending on the periods in which the liabilities arise).

This is in respect of any additional liability due for tax, interest and penalties arising from a settlement, instead of instituting proceedings for the recovery of the penalties, and the amount of penalty included in the settlement exceeded 15% of the tax, the Revenue said.

Under Part Two of the tax defaulters list for the third quarter of the year, in total there was 64 settlements published by the Revenue.

The total value of these settlements/determinations amounted to €12.7m.

Under this part of the tax defaulters list, Michael Fennelly from Willsgrove House, Athy, Co. Kildare, a farmer, haulier and skip hire provider was penalised €46,280.43 for under declaration of Capital Gains Tax.