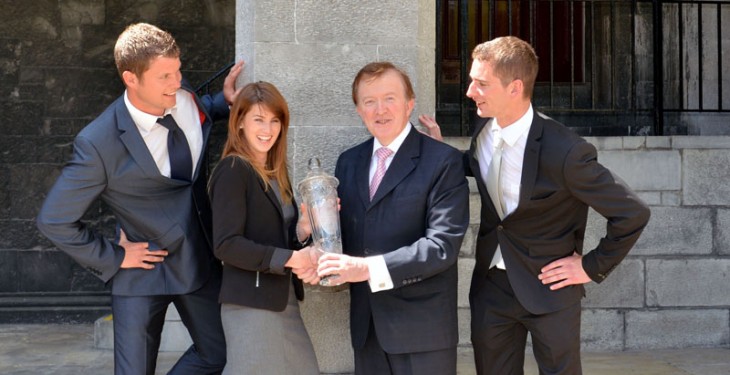 A team of students from Cork Institute of Technology (CIT) has been named ‘College Entrepreneur of the Year 2013’.  The students won the prestigious top prize of €10,000 at this year’s Enterprise Ireland Think Outside the Box Awards, with their diary project MasTech.

This year celebrates the 31st year of the prestigious awards that are co-sponsored by Invest Northern Ireland, Cruickshank Intellectual Property Attorneys, Intel and Grant Thornton.

The winning multi-disciplinary team of students at CIT beat off stiff competition with their project MasTech. Mastitis has a significant adverse economic effect on dairy farmers throughout the world.  The team’s product is designed to enable early identification of mastitis in infected cows during the milking process, facilitating rapid isolation of an infected cow. The team is represented by Nicola O’Mahony, Donal Carey, Kenneth Barry, Damien McAuliffe, Ciaran Malone, Owen Mc Donagh and James Cahill.

The Think Outside the Box Awards are aimed at encouraging students into business as a career option and this year attracted submissions from more than 400 third-level students from colleges across Ireland.  The substantial prize fund includes €30,000 in cash prizes and €30,000 in consultancy fees that are available for winners to help them make a serious start at making their idea a commercial reality.  In addition to winning the top prize, the winning team will also receive mentoring from Enterprise Ireland/Invest Northern Ireland to develop the commercial viability of their overall concept.