A combination of different clovers in grazing and silage swards is helping a Co. Derry organic milk producer secure his total protein requirements from home-grown sources.

“White clover features prominently in all our grazed swards, with red clovers included in our silage mixes,” said Rex Humphrey, who milks 300 cows near Coleraine in east Co. Derry.

“We take three cuts of silage each year, which will have an average 20% protein content.

“The grass is ensiled following a 24-hour wilt. The trick in managing red clovers properly is to raise the cutter-bar (disc bed) of the mower an inch above what would normally be the case. This ensures that the growing tip of the clover plants is not cut.

“Red clover populations will remain viable for up to three years. After that, we would go in with a re-seed – as a matter of course.”

The Humphrey herd, which is split 50:50 between autumn and winter calving, is currently averaging 7,500L with 1.25t of concentrates fed. The cows are predominantly Friesian/Rotbunt crosses with Swedish Red bulls now being used a third cross option.

“Under ‘Soil Association’ rules concentrate feeds can only account for between 40% and 60% of total milk output,” said Humphrey.

“We also grow winter wheat for both grain and silage purposes. Grazed grass is a major driver for the business. Our autumn calvers are currently out in the paddock during the daylight hours.”

The Humphrey herd was established in 1999. It is part of the United Irish Organics’ Group.

We are currently getting 41c/L equivalent for all our milk. Our break-even price is 30c/L.

“Part-loads are also transported cross-border for further processing,” said Humphrey. “The organic milk market is in a state of balance at the present time. And it looks like staying that way for the foreseeable future.” 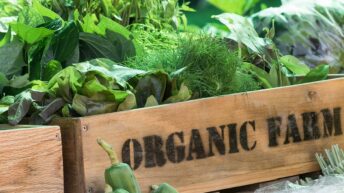