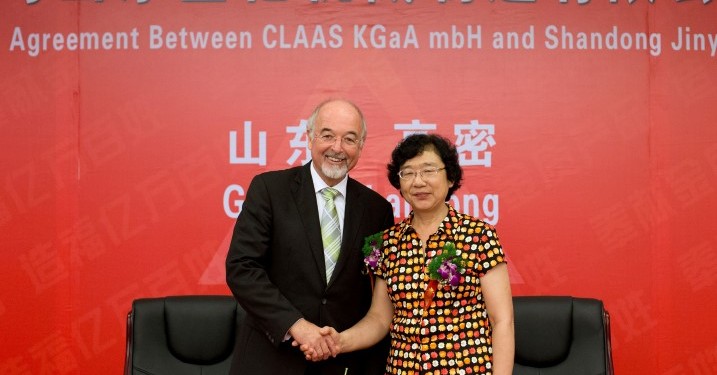 Agri-engineering equipment company Claas is planning a major expansion of its business in China. This company is planning a majority takeover of Chinese agricultural machinery manufacturer Shandong Jinyee Machinery in the province of Shangdong.

Contracts were signed on 16 July by the Chinese shareholder and Claas , but as is usually the case with transactions of this type, the conclusion of the contract is contingent upon obtaining approval from the national authorities, among others.

The spokesperson for Claas management, Dr Theo Freye, said: “China is the largest and fastest-growing market for agricultural engineering in Asia – a market in which Claas has been represented for many years. By acquiring the majority share in Jinyee, we are creating local production capacity for machines aimed at the Chinese market.

“Through expanding our product range, we anticipate creating impetus for growth for Claas in other markets and Claas locations. We have production plants in the Western and Central European markets, as well as in the USA, Russia and India. Purchasing a production plant in China is another step towards Asia – a step that fits in with our long-term focus on this area.”

The mechanisation of agriculture in China is developing rapidly, driven by the changing demands for food (towards greater consumption of meat), the growing population and migration.

Jinyee produces various harvesting machines, mainly for the maize and wheat harvest, at two main sites in Gaomi and Daqing. Each of the sites lies right in the heart of a main agricultural region – one in Central China and the other in North-Eastern China.

In 2012, Jinyee, which was founded in 1958, had sales of around €70m. It currently employs more than 1,000 people and has a comprehensive sales and service network in Central and Northern China.