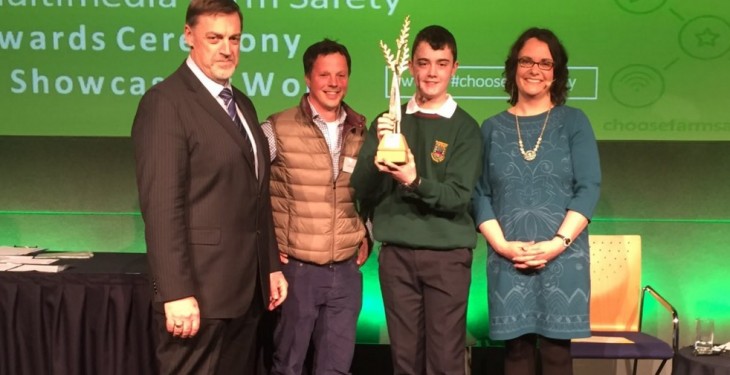 Shane designed an online farm safety maze game, which is aimed at raising awareness of farm safety in a fun and engaging way.

The HSA said that the game has six levels which increase in difficulty as the player progresses, with the addition of new hazards at each level.

The aim of the competition is to raise awareness among post-primary students of farm safety and to give a voice to young people in the national campaign to raise levels of safety on Irish farms.

According to the HSA, the project aims to harness the powerful influence that young people have to effect change in safety behaviour among their own farming families and in the wider farming community.

Speaking at the Awards Ceremony, Assistant Chief Executive of the HSA, Brian Higgisson congratulated Shane and all of the finalists whose innovative multimedia entries promote the farm safety message in new ways.

Every year, farmers and their family members die on Irish farms through avoidable and preventable accidents.

“Young people can influence safety behaviour in their own families and the wider community.”

Meanwhile, Education Manager with the HSA, Joanne Harmon said that this competition was about giving young people the opportunity to play their part in the national farm safety campaign.

“By working with multimedia of their choice, they produced farm safety videos, apps, animations, games and social media campaigns to add to the Authority’s on-going campaign to stop serious injuries and loss of life on Irish farms.

The competition was open to all junior cycle and senior cycle post-primary school students. Further category awards were made in the following areas:

The winners of the competition received specially commissioned trophies and the overall winner won a Go-pro camera.

The HSA multimedia project was carried out in partnership with Kilkenny Education Centre and Kids’ Own Publishing Partnership.