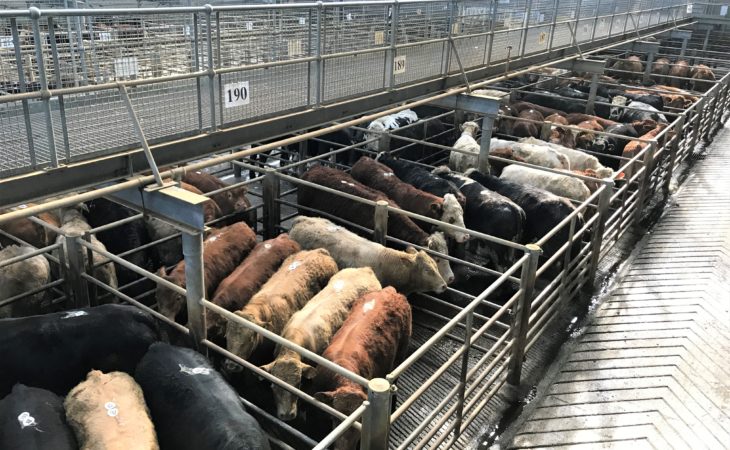 Mart managers have reported good clearances in recent days; both farmers and agents have been busy sourcing cattle.

Farmers – especially those in drier regions – are sourcing cattle for grazing. These farmers – albeit a small number at the moment – have had a positive impact on the market.

Buoyed by an increased demand for manufacturing beef, factory-fit cull cows achieved high prices. Well-fleshed cows – in some cases – realised prices in excess of €2.00/kg. However, plainer cows are proving an easier trade.

As cattle are finished, farmers have been eager to replace finished animals with good-quality forward cattle. Stores falling into this category have achieved the best prices.

Furthermore, in the weanling rings, quality remains the main driver of price, with high prices achieved by premium lots.

Approximately 900 cattle were on offer at Saturday’s (April 7) sale at Balla Mart. The trade was reported as strong. The mart’s manager Micheal Murphy outlined that some buyers were surprised by the quality of the cattle on offer.

Murphy added that 300 heifers were on offer and prices had increased on the previous week. Heifers weighing up to 400kg averaged €2.63/kg, while lots weighing between 400kg and 500kg made €2.47/kg on average.

Numbers were reported to be strong at Kilrush Mart on Wednesday, April 4. On the day, calves met a good demand from both farmers and exporters.

Continental calves sold for up to €400/head, while early-maturing types traded for €130-300/head.

Despite the poor weather conditions and lack of grass growth, the trade was reported as strong at Castlerea Mart, Co. Roscommon, on Thursday (April 5). Quality store lots were in demand, as factory agents, exporters and farmers competed for stock.

In addition, calves met an improved trade, as better-quality animals were on offer.

Last Thursday’s sale in Raphoe Mart, Co. Donegal, featured a good entry of cattle, according to the mart’s Anne Harkin.

There was an excellent trade for all stock on offer.

A large sale took place at Ennis Mart on Thursday last (April 5). According to the mart’s Danny Moran, the trade is holding firm despite no improvements in grass growth or ground conditions.

He said: “Lighter and plain cattle are an easier trade, but forward lots are holding. Both farmers and agents were active around all rings, with forward cattle proving to be the most popular.”

A Limousin stock bull, weighing 1,050kg, also passed through the ring of the Clare-based venue; he sold for €1,800.

A large number of cull cows also went under the hammer. The quality was reported as excellent. Store cows, suitable for grazing, proved to be very popular among buyers. 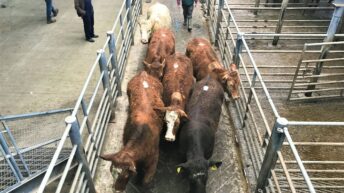