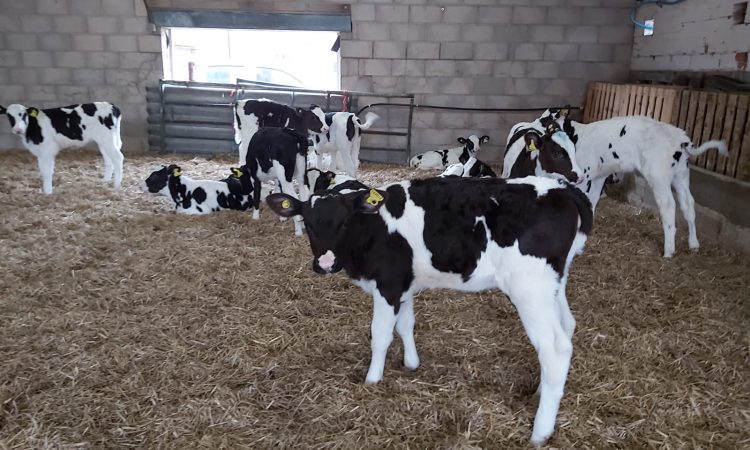 Heifer replacements at a Co. Offaly farm are meeting rumen transition and development targets with a 63-day feed plan.

Joe Bergin, of Conroy Agri, and Joe Murphy, of Bonanza Calf Nutrition, worked with the Cashen family to get the best calf performance from feeding milk replacer from a computer feeder.

John and Eamon Cashen and their wives, Sinead and Nuala, milk 134 cows at Carrig, near Birr. They have scaled up since 2014 when they were milking 27 cows. In 2019 the herd yielded an annual average of 520kg milk solids per cow from 1.2t of concentrates.

All cows are bred to a High EBI Friesian with artificial insemination for the first five weeks and a very small number bred to Hereford genetics. Two pedigree Aberdeen Angus bulls sourced locally in Moneygall are used to sweep up.

Last spring, 138 calves were reared with support from Joe Bergin and Joe Murphy. Increased cow numbers and a tighter calving pattern had led to investment in a computer feeder in 2019.

John liked the idea of the JFC feeder operating with two separate hoppers, to give him flexibility to use two different powders concurrently if needed. He sought the most compatible powder for computer feeding and chose Compumate from Bonanza, which is designed specifically for this job.

Computer feeding can be stressful on calves because the machine feeds to a pre-set programme which results in many unrewarded computer visits which they need to adjust to. Also, all calves in a single pen suck from the same teat so disease can spread more rapidly whilst calves in larger groups increases competition and bullying within pens.

Murphy advised that stress should be minimised by taking control of immunity, nutrition, housing and calf husbandry.

Excellent colostrum feeding protocols which the Cashens have in place are central to this. All calves get a minimum of 3L of colostrum within an hour of birth and a further 3L eight to 12 hours later, providing a good level of immunity.

With Joe’s advice, the Cashens have been concentrating on the vital role of transition milk in calf gut maturation.

“Transition milk is vital as the calf’s gut does not mature until seven days after a normal birth and is very permeable and vulnerable at this time,” says Joe.

Cow transition milk or Transformula from Bonanza is now fed for 10 days. Calves move to the computer feeder at seven days and are fed Transformula for four days before switching to Compumate from the second hopper. 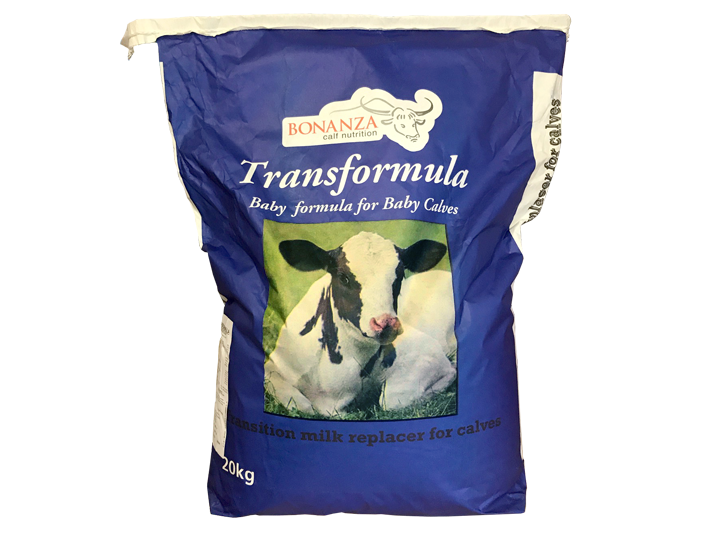 Compumate is made with raw materials to enable it to be digested by calves in the same way as cows’ milk. It contains natural anti-bacterials, anti-virals, pre- and probiotics and milk acids.

The first 20 calves were initially placed on the feeder at an average of five days. To combat rotavirus after three calves tested positive for this, Transformula was introduced and is now fed to all calves for four days from day seven to 11.

“Transformula seemed to eliminate the rotavirus overnight and, together with Compumate, the Cashens have the biggest number of healthy calves reared ever,” says Joe Murphy.

“Eamon was really complimentary of how the machine has helped the system as jobs like bedding and concentrate feeding can be done at a time of day to suit him.”

Eamon was also pleased with the back-up service from Conroy Agri and Bonanza Calf Nutrition, for taking a keen interest in calves and their performance.

“John and Eamon also stressed with the computer feeder in place a management routine of checking calf drinking speeds and feed refusals first thing in the morning and last thing at night is a must,” says Joe.

After checking the machine at 7:00am, any calves that trigger alarms on the machine are remedied immediately after milking. This is repeated with the evening milking.

Even though the machine feed station could handle more calves, Eamon and John limited the number per pen to 30 to help the management and health status of calves. Failure to get this right negates any benefit in terms of labour saved by using a feeder. It meant that the final 14 calves to be born were bucket-reared with twice daily feeding.

“As the computer feeder is really only an automated bucket system, Eamon fed Compumate, sometimes mixing with cows’ milk if available, but mostly on its own,” says Joe.

Compumate was fed at 125g/L or 1lb in seven pints to make a gallon and fed like cows’ milk at 3L, morning and afternoon.

The results were excellent, Eamon reports.

“I could not believe how well Compumate mixed and even when cows’ milk was mixed with it sporadically, digestive upsets never occurred.

Calves were a picture of health with smashing healthy shiny coats and excellent vitality.

Joe says Compumate can be used to bucket-rear calves but most bucket powders are not ideal for feeders, especially when there are more than 12 calves per pen.

Large herd expansion needs proper management and Conroy Agri supplied the Cashens with the tools to deliver excellent results to guarantee the next generation of cattle to continue to deliver impressive results.

“John and Eamon are happy that their heifer calves from 2020 will deliver in spades in the future because they are meeting growth targets and are healthy. If you have health the rest will follow!” says Joe.

For more information on the Bonanza product and stockists, just click here