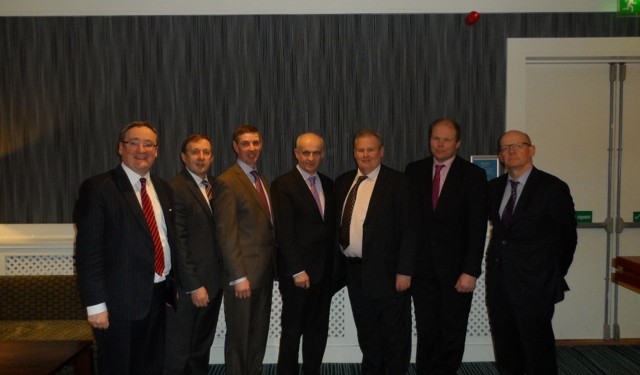 According to the IFA, both farm organisations were very clear that the recent factory beef price cuts and specification changes were seriously eroding confidence in the beef sector on the island and had inflicted excessive financial damage on winter finishers.

In relation to specification, IFA president Eddie Downey said: “Both processors and retailers North and South have to understand the grass-based production systems in Ireland and the smaller family farming structure, and appreciate that cattle have to move from breeding to weaning to fattening farms.  This essential movement is efficiently facilitated in an open and competitive fashion through livestock marts all across the island.”

On age, Downey said IFA is proposing that the current 30-month age limit on steers and heifers be adjusted upwards to 36 months. He said the 30-month age limit was outdated and no longer appropriate, and this move would provide important flexibility to producers.

On bulls, the IFA president said the established practice for the UK market was 16 months of age, but this system did not suit the grass-based production in southern Ireland. 18 to 24 month old bulls were much more suited to Irish conditions and European markets, where half our exports go, he added.

“Contracts are very important for bull beef producers and processors need to work with farmers on expanding this.  Bull beef was essential to keeping a year round beef supply in the chain.”

The IFA President said a strong live export trade for male calves from the dairy herd was also essential to keep the beef trade in balance and avoid the problems that had occurred this spring.

He said processor moves to try and impose uneconomic weight penalties were unacceptable and would only inflict further pressure on our valuable Continental breed suckler cow herd.

Downey also briefed the UFU on the IFA campaign to reduce the unacceptable price gap between Irish cattle prices and those in Ireland’s main export market in the UK.

He said IFA is insisting Agriculture Minister Coveney takes action on price competition and removes the artificial blockages restricting the operation of the single market with the live export trade of cattle to Northern Ireland and Great Britain.

“IFA is insisting that Minister Coveney and Bord Bia go directly to meet his counterparts in Northern Ireland and Great Britain as well as the key retail groups to make progress on this major issue.”