Just outside the village of Frenchpark in Co. Roscommon lies a new start-up dairy herd of 70 crossbred cows.

The new dairy enterprise, on the farm of Tommie Devine, is coming to the end of its very first busy calving season, which has seen 60 out of 70 Friesian and Jersey cross heifers – which were sourced in Skibbereen in Co. Cork as weanlings – calve down at the time of writing.

Tommie, who works full-time off-farm for Aurivo and is now supplying them with milk as well, is in partnership with his father, also named Tommie, and decided to go down the dairy route almost two years ago, when he finished his studies in University College Dublin (UCD) with a degree in Animal Science.

The farm, before this, was home to beef and sheep; however, when Tommie finished college he felt with “beef prices on the floor” that it would be best if the farm took a different direction.

From his studies and through gaining practical experience on dairy farms through college work placement, Tommie’s interest in dairy grew and from then on it was always in his mind to go back home and start up his own dairy enterprise.

Plans began back in 2018 and since then, bit by bit, the dream has become a reality, with the Roscommon native getting into the swing of things, after a busy and bumpy spring in which both cow and operator are now used to the robot. 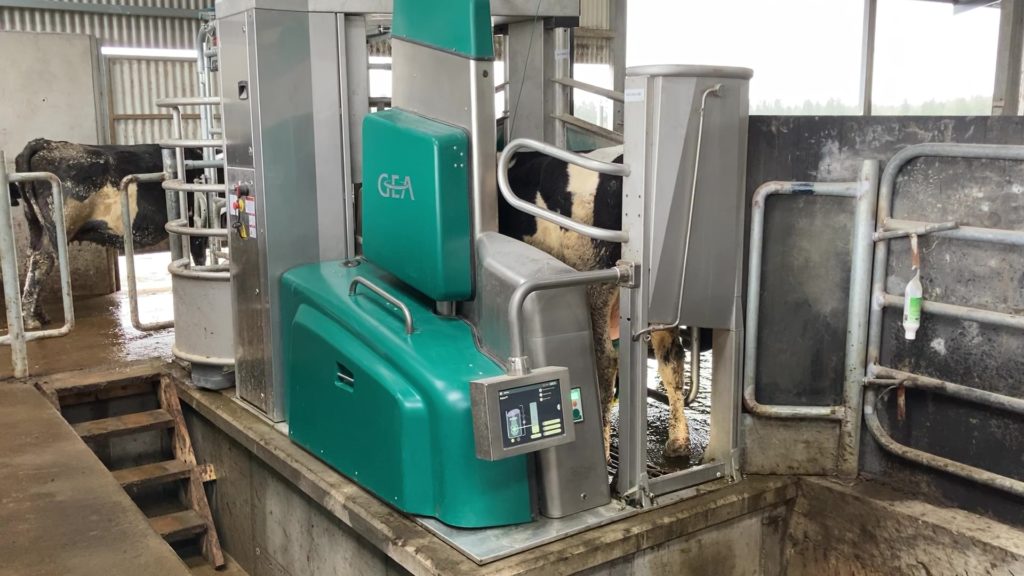 Tommie said that before choosing a robot, he visited 17 dairy farms that had robots and herringbone parlours to get a feel of what might suit him and his farm the best.

Speaking to Agriland, Tommie said: “We didn’t know straight away that we were going to put in a robot. We visited many different farms [17 in fact] and spoke to the farmers to get advice and basically try and figure out what suited us best.

“What probably pointed us in the direction of the robots was the fact that I’m working full-time off-farm with Aurivo and with a robot, it offers you more flexibility than say if we had put in a herringbone parlour – in which case I would need to be there morning and evening to milk the cows.

“For example, we can find out what ones are doing well [production wise] and the ones maybe that aren’t and with the feed-to-yield at our disposal, we can reward those cows that are producing the goods.” 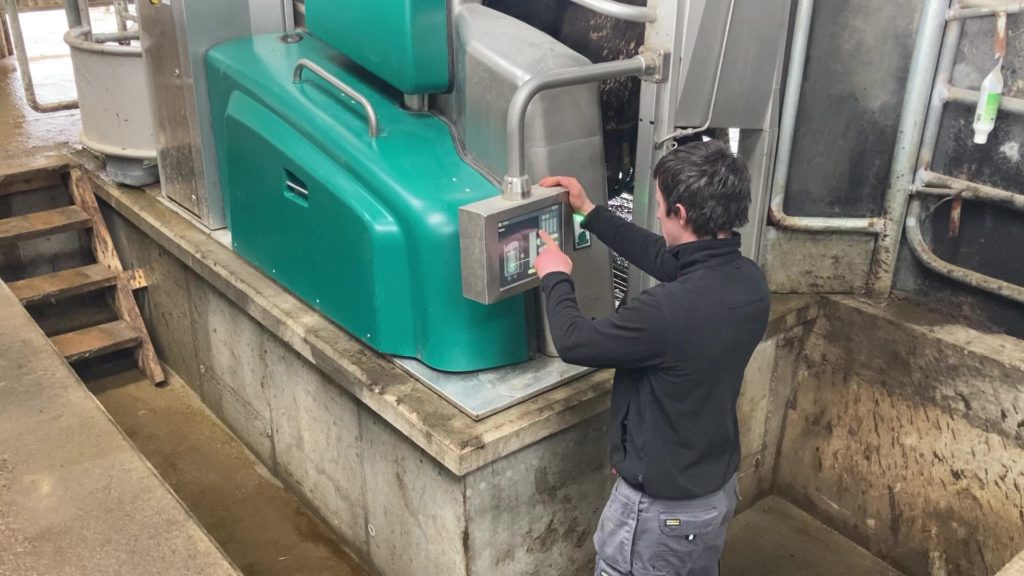 Having narrowed down his options to a robot, Tommie then had the decision of what brand of robot to go with. He opted in the end for a GEA DairyRobot R9500 that can milk up to 70 cows. It was a trip to Co. Tyrone to see a GEA robot install that swung Tommie in the end, along with a few “standout features” that the robot possessed.

Speaking about the decision to go with a GEA robot, Tommie explained: “At the start, we didn’t know who we were going to go to but in the end, we went with the GEA robot for four main reasons.

“Jonathan Bennet of Bovemtech, who is a GEA dealer, came in and we were very happy with what he had in mind for us and it went from there really.

We really liked the manual attachment of the clusters, especially here, I found it a gift when we were calving.

“When a cow would calve at 2:00am, you know they can be a small bit giddy and the fact you could just press a button and stick on the cluster in a few seconds rather than waiting for it to attach itself while she would be kicking, was very handy to be able to do. 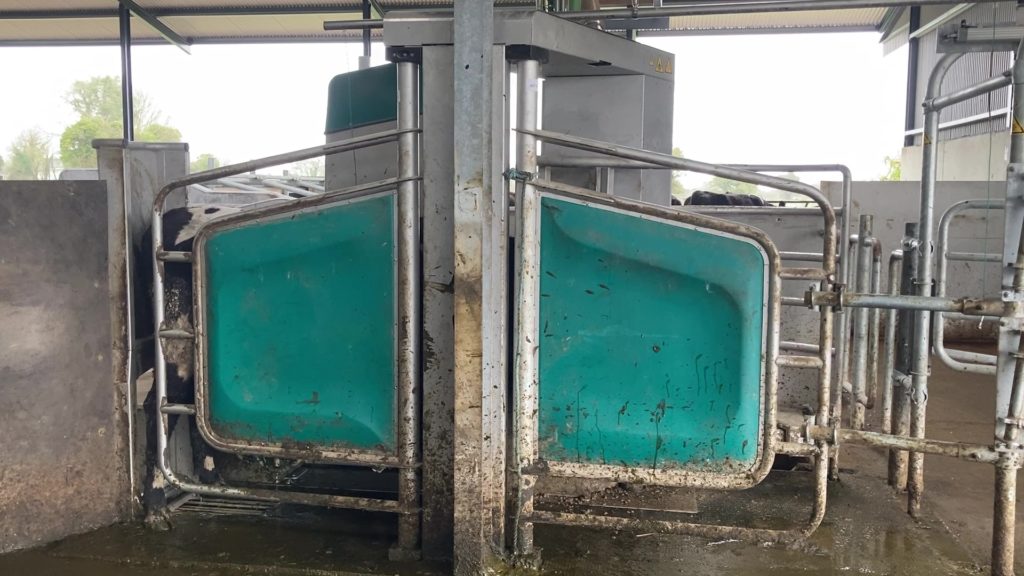 “As well as that, being able to have the pit beside the robot was another feature we liked. If you ever want to do teat sealing or anything like that it is very handy to do now.

Furthermore, the fact you can separate all four quarters was another feature we were drawn to. So if you had one quarter with a high cell count you could dump that quarter and send the other three to the bulk tank.

“The milk can be sent either to the 10,000L bulk tank, dumped or pumped over to the calf shed.

“Finally, the robot can adjust to suit the size of the cow entering the robot. There are three sizes, small medium and large. Because they are heifers, they are quite small being crossbreds, so the robot can tighten in on them so that they can’t move as much and it makes it easier for the robot to attach the clusters.”

The concrete work has been completed for a second robot if Tommie wishes to go ahead and install another one at some stage in the future. 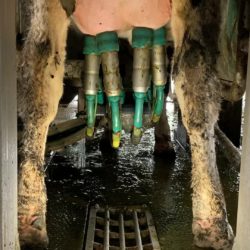 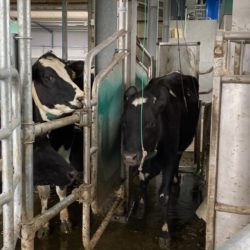 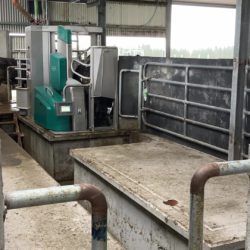 Incorporating a 5-bay double slatted unit and adding to it

Tommie wanted to make use of a 5-bay double slatted unit that was used to finish beef cattle on the farm in previous times.

The new build can now be broken into two main sections, with the old 5-bay double having been extended out either side.

On one side there are 76 new cubicles, with feeding barriers at opposite sides, while a middle passageway runs between the two blocks of cubicles. If Tommie wishes to do so, the section which has 76 cubicles can be further extended out if cow numbers increase to facilitate more cubicles to be installed.

All that will need to be done is to take down the galvanised sheeting and doors and continue straight out towards the grazing platform.

The cubicles were sourced from and installed by Wilson Agri as well as the tip-over drinkers. The mats for the cubicles were purchased through Agri-Comfort. The mats are made up of 40mm of foam, with a rubber mat on top. 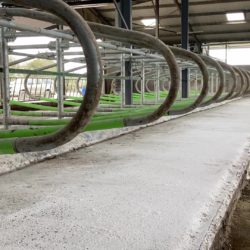 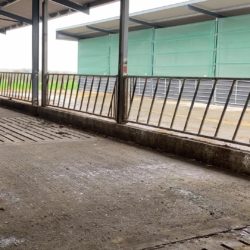 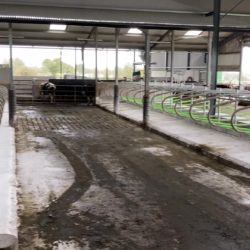 The other section of the shed is where the robot was installed, as well as an isolation and calving area. A store, plant and the bulk tank room are also on this side of the shed.

The isolation area currently holds the remaining cows yet to calve. When they are close to calving, Tommie moves them into the large group calving pen, which he has bedded with peat and has a calving pen in it.

Furthermore, nestled in the corner of the large group calving pen is a small straw-bedded pen which Tommie can move a cow into when she is about to calve.

With the help of GEA, Tommie was able to design it in a way that everything would fit all under one roof. Brian Gordon erected the extension to the shed and Dermot Dooney did all of the concrete work. 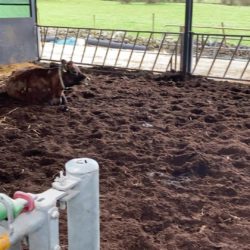 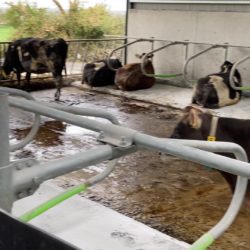 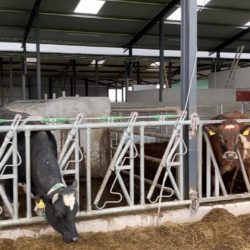 With no roadways on the farm prior to this, Tommie had to set up new pathways for his cows to access the grazing platform, which would allow for him to operate an ABC grazing system.

In total, 1,100m of roadway was laid last summer. Because Tommie went with a robot, the roadways didn’t need to be as wide as farms that milk twice-a-day and are bringing them all in at the one time. 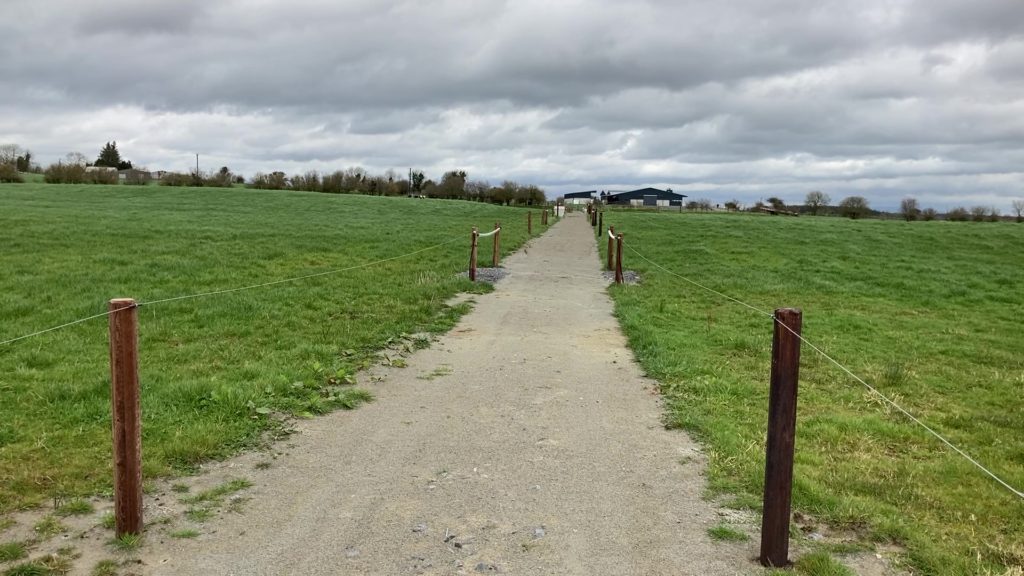 Instead, Tommie could go with more narrow roads, which helped to reduce costs. Also, to encourage cows out towards the roadway to the robot, water troughs are placed near the entry/exit points of the paddocks. 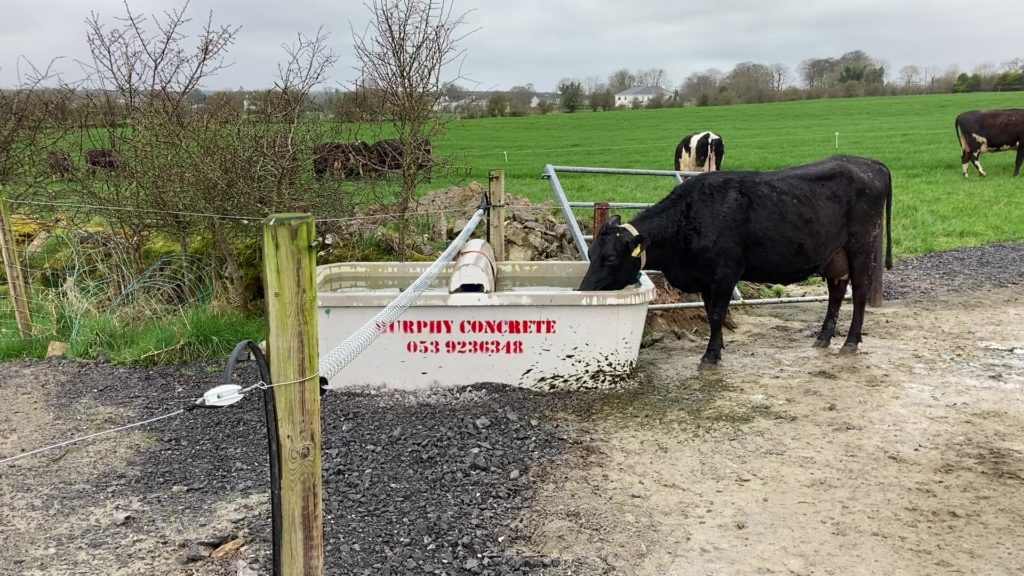 Tony McTeigue looked after everything outside of the shed and robot, such as digging and laying the roadways, laying the water pipes to connect the water troughs, and drove all the stakes. The fencing was completed by John Naughton. 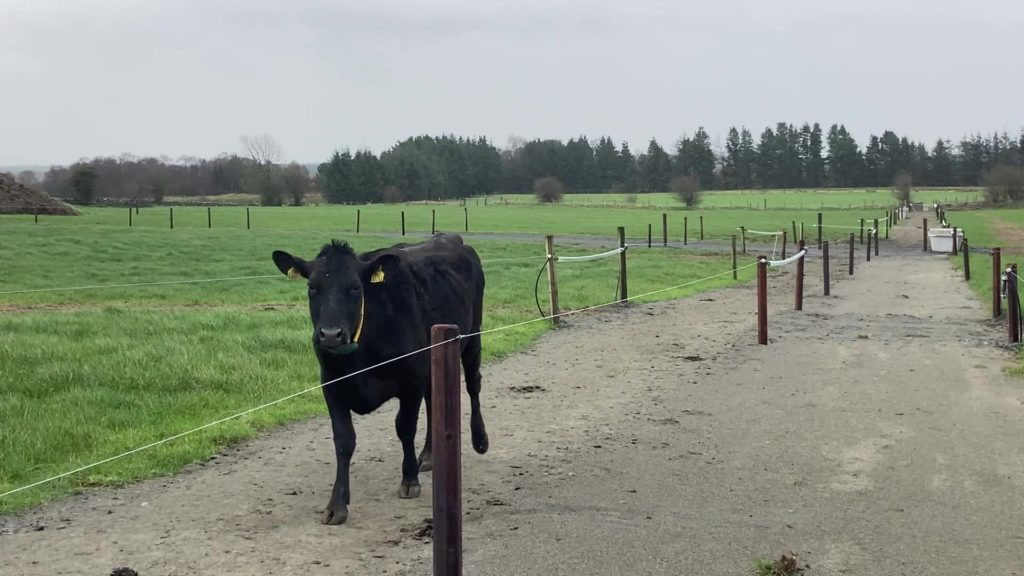 As well as installing the robot, putting in cubicles and setting up the grazing platform, Tommie built a calf shed right beside the cubicle house.

It’s a six-bay single shed that has the capacity to hold 70 calves. No stone was left unturned here either, with Tommie ensuring his calves get the best start in life.

At the front of the shed, 11 JFC calf cribs can be found to house the youngest calves, while moving further down the shed, in the middle section, larger group pens can be found, with canopies at the back to ensure a warm and comfortable environment for calves to lie in. 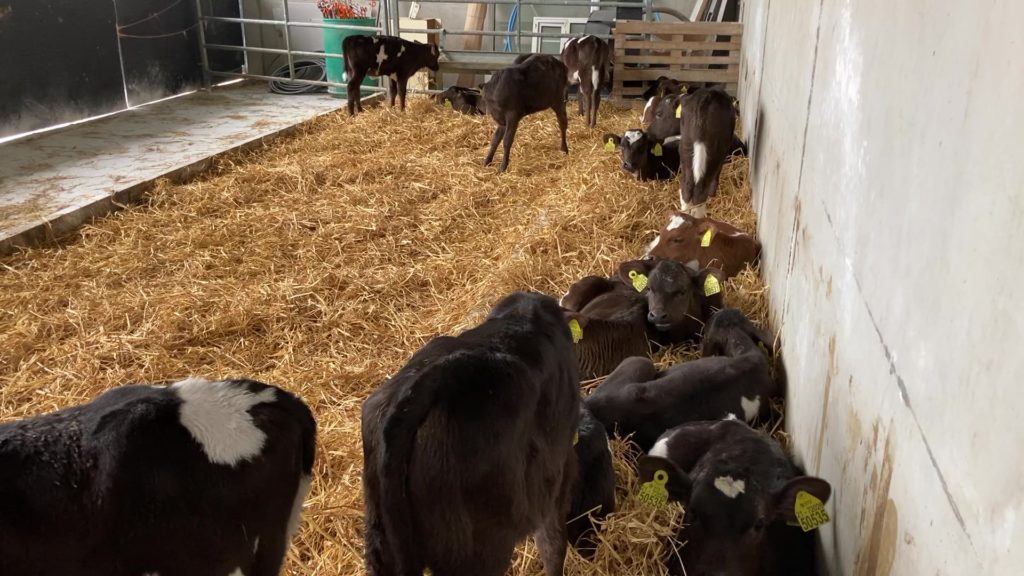 The furthest pen to the rear of the shed is where the eldest calves are kept. Unlike the middle group pens, it has no canopy and is just bedded with straw.

Each group pen (two) is served with a JFC automatic calf feeder, which Tommie says has been a real lifesaver when calving got very busy and when his time was taken up trying to train cows into the robot.

Stockboard was hung on the gates at the front of the build, as well as windbreakers to prevent any draughts and the shed getting too cold. All the younger calves are fitted with calf jackets as well. 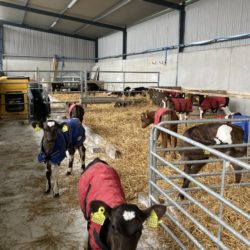 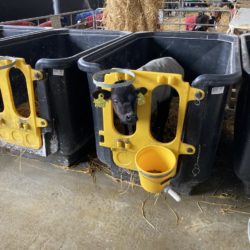 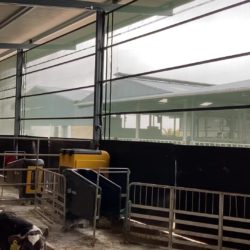 The father-and-son team were able to avail of the Targeted Agricultural Modernisation Scheme (TAMS II).

The total cost of the project was €330,000 (excluding VAT). Excluding the value of the grant, the new project is standing the Devines €250,000. It took the best part of 16-18 months to complete, involving the sheds, robot, and roadways.

Planning began in February of last year, then in June it really started to kick off, when work began on the roadways. The bulk of the building work was completed between June and November, just in time for winter housing.

“I won’t lie it wasn’t the easiest start, it was a busy spring and to be honest it took some of the heifers three or four days to get used to the robot at the beginning and it’s only the last few days they have got used to coming through the gates into the robot to get milked. But thankfully now they’re flying into it. 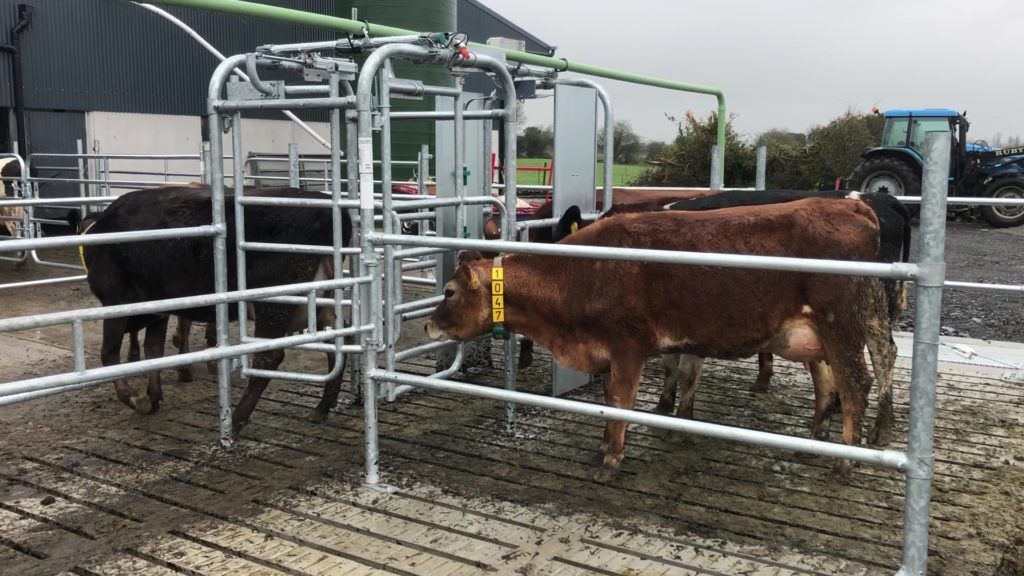 “If you had said to me that you were coming to me last week I wouldn’t have had time to chat with you.

“It’s only this past week where it has quietened down, but look it’s an exciting time for us here and I look forward to seeing how we get on with it,” Tommie concluded. 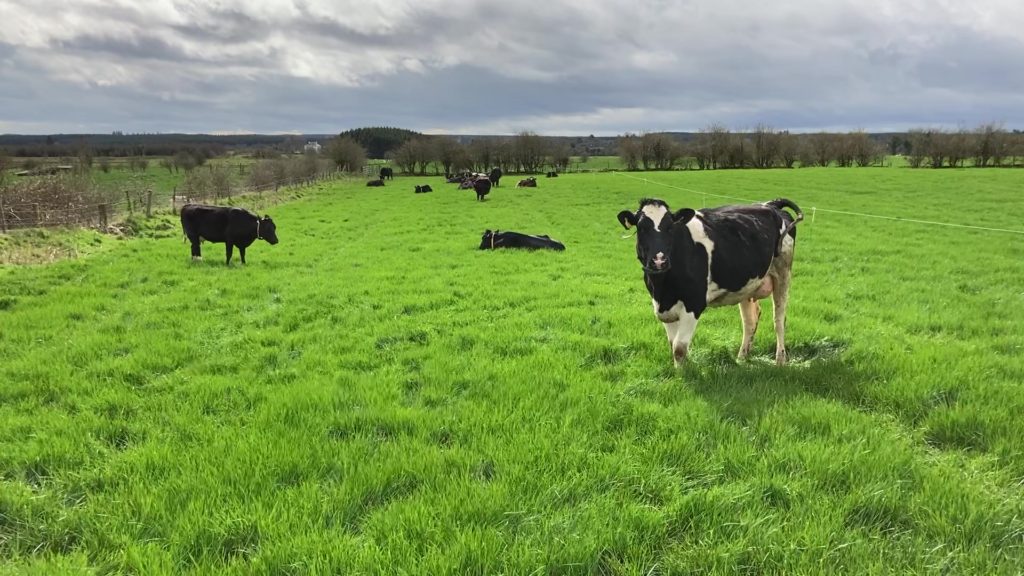