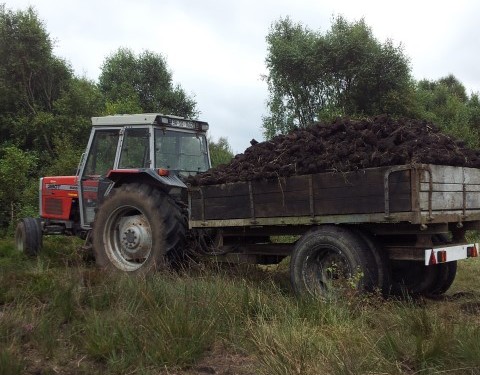 The Government yesterday published a new long-term strategic plan for Ireland’s peatlands. The document, which has been broadly welcomed by the farming community, states the new measures will have no impact on the cutting rights of  more than 80 per cent of active turfcutters.

Minister with responsibility in this area Jimmy Deenihan TD commented: “Since the Habitats Directive was signed in 1992, Ireland has lacked a coherent, long-term vision for our peatlands. This package of documents now sets out that vision. These documents clearly recognise that turfcutting is a valued traditional activity that will continue, but that the State must also meet conservation obligations.”

Commenting on the plan, the Irish Farmers Association (IFA) said the decision to take bogs out of national heritage areas (NHA) designation is a step in the right direction.

IFA special area of conservation project chairman, Tom Turley, said the approach now being taken by Minister Deenihan is one that has been pursued by IFA for some time as the problems on the SAC raised bogs, which have emerged over the past number of years,could have been avoided if such a strategy had been put in place at that time.

Also reacting to the announcement Marian Harkin MEP for Ireland West said: “Finally some progress is being made on the issue of turfcutting on designated bogs. This matter has been like a festering sore on Irish politics for very many years. And finally it looks as if we may be getting around to undoing some of the bad decisions made in previous years by now de-designating certain bogs.

“To be fair to Minister Deenihan he was handed an incendiary device because of inaction by previous governments and because the initial designations were carried out without any consultation.

“The Irish State was facing possible court action and immediate fines, which resulted in Minister Deenihan commissioning a detailed scientific study on the designated sites. One of the objectives was to de-designate some of these sites thus allowing turfcutting to continue and in other cases to allow turfcutting on part of the site. His other objective is to designate more suitable sites to compensate for those he has de-designated.

“In the case of NHA, there is no need for EU approval as this is a matter for member states provided they comply with the Environmental Impact Assessment Directive.

“In regard to de-designation in SACs, EU approval will be needed and while detailed scientific meetings have taken place between the Department and the EU Commission no list has yet been submitted for its approval.

“As always we need to see a final outcome before we rush to judgement and given the torturous complexity of the situation it is unlikely that everybody will be satisfied. Nonetheless it is the first concrete meaningful action that has taken place which may provide acceptable solutions and for that Minister Deenihan and his staff deserve credit,” she concluded.

The documents are available on the department’s website and views of the public are invited before 18 April.

Key proposals
• Plan incorporates a cross-governmental approach to managing peatlands
• New National Raised Bog Special Areas of Conservation (SACs) Management Plan which provides for the future restoration and management of the 53 raised bog SACs
• Strategy will also exclude the most heavily cut sites from the network, avoiding any impact on over 80% of active turf-cutters currently in the NHA network from over 3,000 to around 500.
• Turf cutting on 46* NHAs will be able to continue and the Minister will proceed towards de-designation of these sites.
• Turf cutting will be phased out on 36* NHAs over three years with the introduction of an individual permit system immediately.
• Conservation management plans will be in place for all raised bog NHAs by 2017.
• 25 new sites will be proposed for designation as raised bogs NHAs to replace the habitats lost through de-designation of the more heavily cut sites. Many of these are in public ownership or have relatively few or no turf cutters.
• Any turf-cutter required to cease turf-cutting on an NHA will be offered compensatory measures similar to those available to turf-cutters from raised bog SACs. Compensation will be made available immediately to active turf-cutters on these site.
• The new NHA network will contain more active and degraded raised bog habitat (which is capable of being restored) than the existing network.