Brexit: The UK is at ‘a very clear fork in the road’ 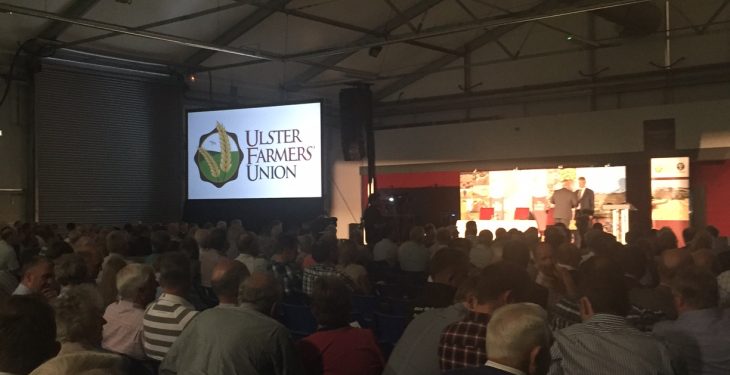 The UK goes to the polls on June 23, where it will decide to either remain or leave the European Union.

Ahead of the vote, the UFU hosted a debate on Brexit between Owen Paterson MP and Sir Peter Kendall.

Opening the debate, UFU President Barclay Bell said that the upcoming referendum is a once in a generation vote and it will shape the future of agriculture in Northern Ireland.

Paterson, who is on the leave the EU campaign, said that the UK and the North is at a “very clear fork in the road”.

“If we leave, we could spend the same amount of money but we could target it. We could sit down in Northern Ireland and tailor a rural policy to your own industry and landscape.

Furthermore, according to Paterson, should the UK vote to leave, trade will continue as it is at the moment between Northern Ireland and the Republic.

“Trade will continue. The idea that they’ll jack up tariffs… is ridiculous. It’s a 19th century idea that is completely out-dated.”

The border is not going to have barriers on it. You don’t have to have 19th century wooden poles stopping the stagecoaches.

Concluding, Paterson said that the UK will prosper and will be much better off if they vote to leave.

For the remain in the EU side, Sir Peter Kendall said that he wants the UK to look for solutions and for reform.

“When you’ve tensions in any relationship you look at ways how you can improve it.”

On trade, Kendall said that the US imports a “big fat zero of UK beef and lamb”.

Today the UK exports more to the Republic of Ireland more than what we export to China, Japan and South Korea combined.

Should the UK leave he said that the UK will have to fight every single battle by itself.

“The vote leave team are promising that they can protect the subsidies. [Should the UK leave] the economy will take a hit and there will be less money.

“We will find ourselves dramatically dis-advantaged. We’re stronger in reforming Europe rather than jumping ship.”