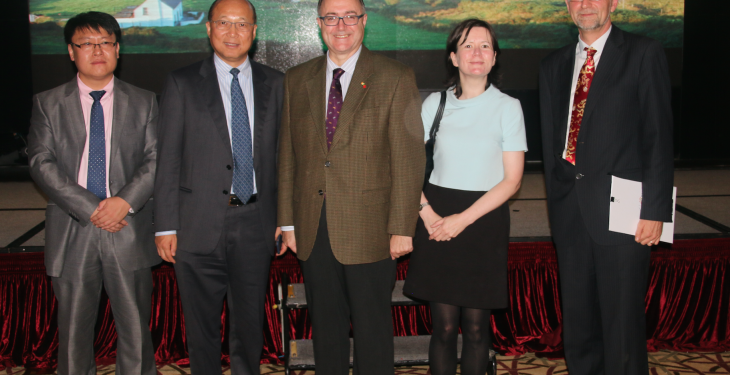 Bord Bia has signed a partnership agreement in Shanghai with SF Best, one of China’s leading ecommerce platforms which will see online promotion and sale of Irish food and drink over the next 12 months.

The online ‘shop’ will see promotions initially focus on premium Irish seafood and over the coming months products including the Kerrygold dairy range and alcoholic beverages will also be promoted on the SFBest site.

Bord Bia Asia Director James O Donnell signed the agreement with Group Vice President of SF George Li and was joined for the ceremony by the ambassador of Ireland to China Paul Kavanagh.

O Donnell said this is an ideal partnership for Bord Bia. “Irish food is trusted by families in China as a safe, clean and healthy choice and SFBest is trusted by Chinese families for its unparalleled record in safe and secure logistics.”

SF Best is a subsidiary of China’s SF Express Group which is the market leader in delivery logistics and has an annual turnover of €1.71 billion.

The company operates 2,800 stores across China and – importantly for Irish food exporters – its ecommerce business is recognised as a leader in fresh and frozen imported produce. SF Best turns over €150m annually with some 1.5m people visiting the website daily.

According to Bord Bia, online shopping for food is becoming an increasingly important part of Chinese consumers’ purchasing habits.

Speaking at the contract signing Ambassador Kavanagh said the potential return from this venture is enormous, building as it does on the success of previous online Irish food and drink promotions.

“With 11% of all Chinese retail purchases now conducted through online channels and some 63% of Chinese consumers shopping online weekly, there has been an unprecedented demand for imported food and beverages as consumers enjoy the convenience, competitive prices and quality assurance offered by online retailers.”

Food and Drink exports to China

According to Bord Bia, Ireland’s exports to China increased in value by 50% last year to reach €367m and exports to Hong Kong increased by 24% to €180m.

China and Hong Kong continues to be a growing market for Irish seafood with exports increasing nearly five-fold in value since 2011 to reach almost €27m in 2014. This positive growth in Irish exports to the region continued in 2014 with sales to mainland China up 45% year-on-year compared to the 2013 figure.

Through its trade development programme, Bord Bia has worked in encouraging high-end retail and foodservice Chinese customers to visit Ireland to meet with Irish food producers and processors on a one to one basis.

According to Bord Bia, these itineraries have been effective in generating new business for the sector through providing first hand experiences of Irish farms and food and drink companies and the unspoilt environment in which Irish food is produced.

Over the last three years, Bord Bia has welcomed more than 200 Asian customers to Ireland on customised itineraries.