Beef trade: No change in base quotes as supplies begin to tighten

Beef factories have opted to keep quotes at last week’s levels. The majority of processors are now offering base quotes of 390-395c/kg for steers and 405-410c/kg for heifers. When compared to the corresponding week in 2017, these base quotes are up 5c/kg.

However, finishers with large numbers for slaughter are holding out for 5c/kg above base quotes. Furthermore, deals are also being done on transport to encourage farmers to offload supplies.

Moving on to the cow trade, the majority of processors have also held cow quotes at last week’s levels. Procurement managers are starting negotiations with farmers for O-grade and R-grade cows at 340c/kg and 350c/kg respectively. In addition, 325-335c/kg is being offered for P-grade animals. Negotiations for U-grade cows start at 370c/kg.

However, it must be noted that there is a wide variation in the prices being quoted to farmers. This depends on the location and demand of individual processing plants. Click here for a detailed breakdown of prices

Some 11,691 steers were slaughtered in Department of Agriculture approved plants that week – a decrease of 258 head – and heifer throughput stood at 9,414 head (-817 head). In addition, throughput decreases were recorded for young bulls (-483 head) and cows (-569 head). However, the number of aged bulls increased by 16 head.

Cattle supplies at Irish processing plants for the week ending March 25 amounted to 31,956 head. This was a decrease of 6.2% on the previous week. However, it is a 2.2% or 710 head increase on the corresponding week in 2017.

In Britain, the Agriculture and Horticulture Development Board (AHDB) reported that – during the week ending March 25 – R4 steers averaged 369.6p/kg (409c/kg). R4 heifers also made the equivalent of 409c/kg.

Looking at young bull returns, it was reported that overall prices increased by 7.7p/kg (8.8c/kg) on the previous week; R4 young bulls made the equivalent of 402c/kg.

Prices were reported to be strong for cull cows during this period. Animals falling into the O4 category made the equivalent of 318c/kg.

Angus Woods, national livestock chairman of the Irish Farmers’ Association (IFA), outlined that prices across the main markets in Europe are better than 2017. 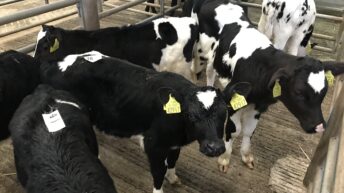