Beef trade: Cows still under pressure and no movement with prime cattle quotes

As has been the case over the past two weeks, there has been increased downward price pressure on cows presented for slaughter.

R and U-grade cow quotes start at 330-355c/kg. Factories specialising in cows are paying the higher prices; the location and demand of individual processing plants plays a role in the price being quoted to farmers for cows.

Meanwhile, yet again, there has been no movement in the prices quoted for heifers and bullocks. Factory-fit steers are still trading at 375c/kg, while their female counterparts are quoted 10c/kg higher at 385c/kg.

Procurement managers have noted a plentiful supply of both bullocks and heifers, with some outlining they are full for the week and for early next week.

Official figures show that some 33,831 cattle were processed in Department of Agriculture approved beef export plants during the week ending November 4  – a fall of 4,622 when compared to the previous week’s kill. This was mainly due to the bank holiday Monday.

The addition of that week’s throughput brings the cumulative kill for the year – up to and including the week ending November 4 – to over 1.51 million head.

Looking at the figures in more detail, steer and heifer kill stood at 13,965 head and 8,842 head respectively; when combined, this represents 67% of the total weekly kill. 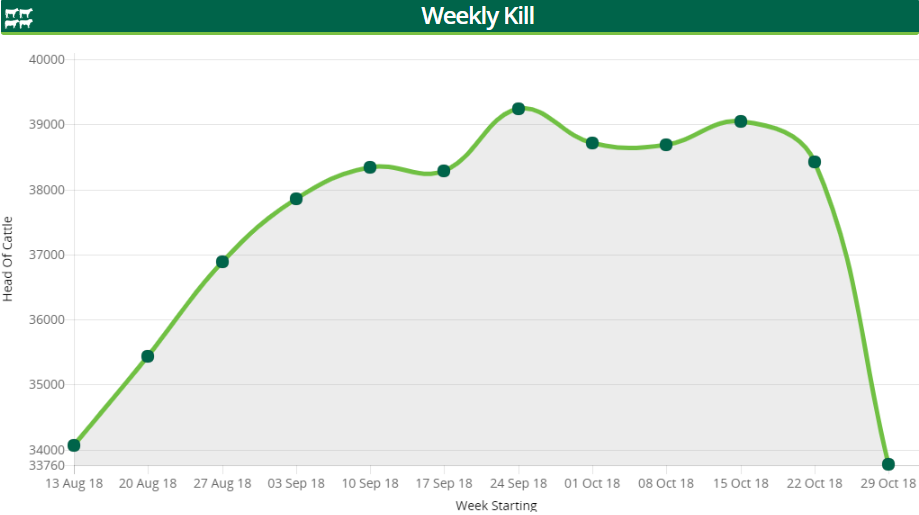 Cow slaughterings accounted for the third largest segment of the kill at 7,933 head, while young bull and aged bull throughput stood at 2,645 head and 395 head respectively.

As mentioned above, just over 1.51 million cattle have been slaughtered in Ireland this year – a climb of 53,195 head or 3.6% when compared to the corresponding period in 2017.

Throughput increases have been witnessed in the young bull, aged bull, cow and heifer categories. However, steer throughput has declined by 12,709 head or 2.2% – largely due to the rise in young bull slaughterings. 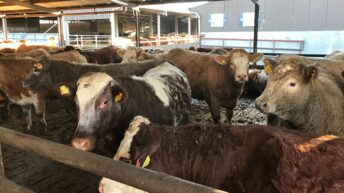