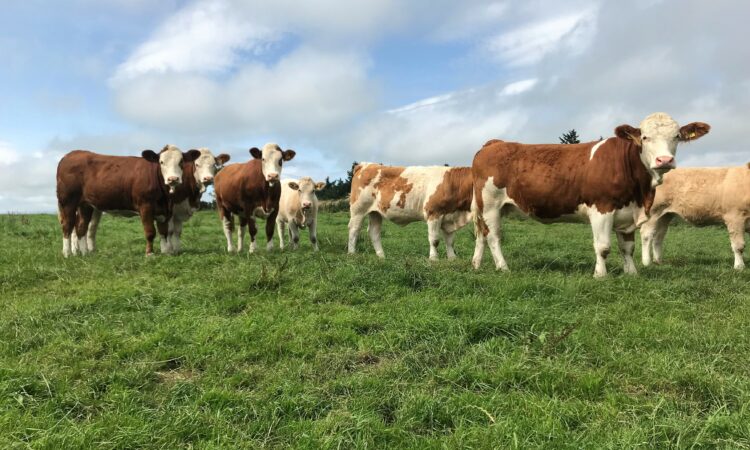 In this week’s beef focus, we travel west to the farm of John Hession at Portroyal Partry, Co. Mayo. On the day, we visited his 42ac out-farm in Frenchgrove, Hollymount.

With Croagh Patrick in the distance, John outlined his love for breeding Simmental cattle; the home farm is located 25km away.

John has spent the last 10 years focusing on maternal traits, breeding a cow that is very fertile and has excellent milk production. However, John’s 55-cow pedigree herd is quite unique.

Realising the need for diversification in the market place and the need to ‘stand out from the crowd’, John went down the route of breeding polled Simmental cows. Now, the Portroyal herd can be seen dotted across his lush green paddocks.

“My father and I always had Simmental crossbred cattle for the last 40 years, under a suckler-to-weaning system.

“However, I went to Australia to look at polled pedigree Simmentals. I then decided to go down the pedigree route in 2008. 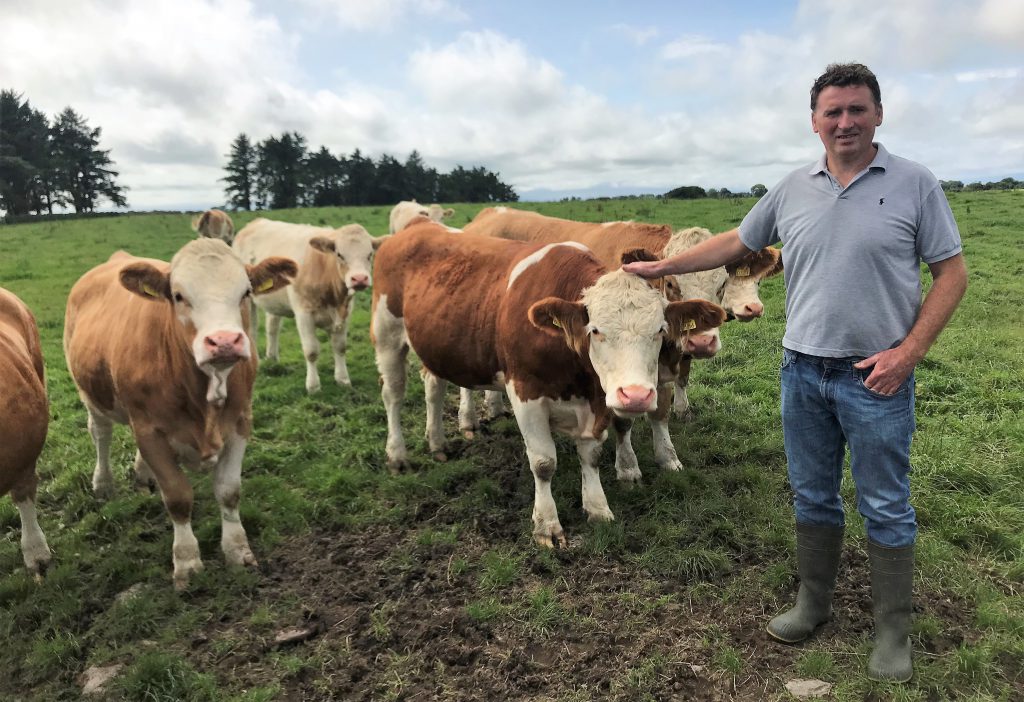 “I purchased my first polled stock bull in 2011 – namely Ardadoney Bonjovi (P) – and I had great heifers from him. So he started me off on the polled journey,” he explained.

Since then, John has started to export polled genetics. In 2017, he shipped a large batch of polled Simmental heifers to Turkey. He has also sold a polled bull to Dovea AI – Portroyal Gilmore (P).

As we passed through a batch of extremely docile heifers – a percentage of which will be kept and the remainder of which will go to the Ballymote sale on October 6 – John explained that polled, fertility and milk production are his ‘go to’ traits.

The Mayo-based farmer – who lectures in Sligo IT full-time – outlined his need for a dam who is fit to rear a healthy, strong calf on her own. He operates a vigorous culling regime and any cow not producing the goods is offloaded.

“I like staying with the milk as much as I can. A lot of my land would be very marginal and – therefore – I need my cows to have milk and be capable of rearing a strong calf; if not, they won’t thrive properly.

“I also focus on the cows’ udders; I hate the big low bag. It has to be tight and square with four even spins; it’s very important for the cow. The calf has to suck themselves because I’m gone to work,” he added.

John – who carries out his own AI – praised the help of his neighbours at the busy times of the year when it comes to breeding. Moreover, he doesn’t ‘put all his eggs in one basket’ and chooses good ‘growthy’ bulls with a short gestation length.

John uses semen from all around the world – Australian, Canadian, South American and Czech bulls. However, in recent times, he has taken a shine to Danish Simmental genetics.

“I really enjoy the breeding side; I put a lot of effort in when choosing bulls,” he added.

John is well known in Simmental circles all across the world and is no stranger from visits from other Simmental enthusiasts, while also being a member of the Irish Simmental society.

“I have focused a lot on the Danish genetics and cattle over the last couple of years and I have imported seven polled bulls from Denmark to date. I am also currently exporting embryos from a homozygous polled (an animal that has two polled genes or PP) cow back to Denmark.

“The Danish bulls provide a great growth rate and have excellent ‘beefing’ ability. I’ve been over there on numerous occasions and I buy verified bulls from the test centre,” John explained.

He noted that Simmentals bred in Denmark have a great beef and milk ability and huge growth potential.

Continuing, he said: “There’s no point having a big ‘beefy’ bull if he comes from a cow with no milk and has a bad udder; the maternal traits are just as important as the terminal traits.

“Genomic testing is a great job; it tells me a lot about my animals. I’m always looking to improve and use new genetics. 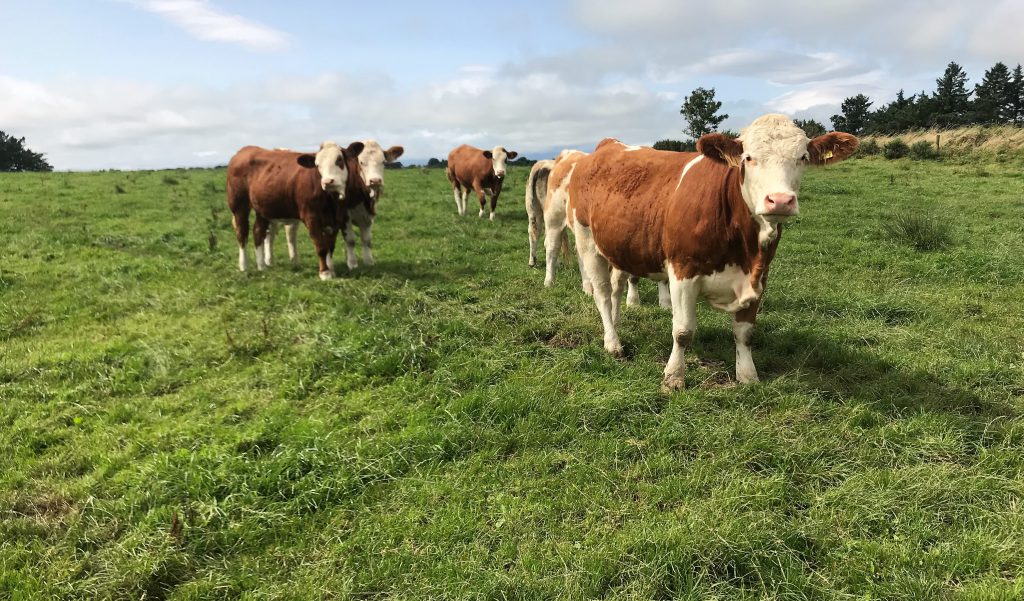 “The first thing I do is look at the mother. I want polled, a good wide pelvis and a good udder. I won’t touch a bull unless the mother has a good udder; then I build the beef side,” he explained.

The breeder noted that he must be careful with bloodlines as they are very tight for polled Simmentals.

John will bring a consignment of breeding and weanling heifers – some from AI sires and some from stock bulls – to the Ballymote sale on October 6. John admitted that he had gone away from the idea of the sale in recent years and preferred selling directly off-farm.

“I’m looking forward to the Ballymote sale in October. I like the way it is organised and promoted this year; I normally sell the weanlings direct off the farm.

The Mayo man is hoping the fact that the majority of stock are homozygous polled (an animal that has two polled genes), that many crossbred farmers will be interested in purchasing the cattle. 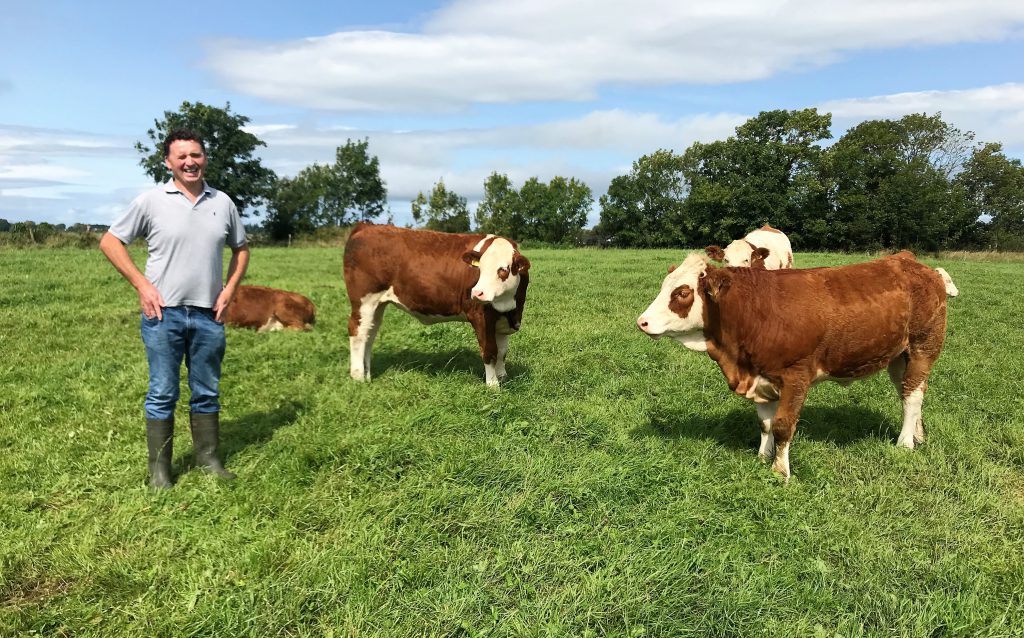 Meal has been introduced to the cattle earmarked for sale at a rate of 2kg/head/day and all stock presented for sale are vaccinated against IBR and BVD.

As of now, John has been operating a spring and autumn-calving system. However, he plans to pull back to a May, June and autumn system where he will have more time on his hands.

Heifers are aimed to calve aged 26 months and 70% of last year’s crop of calves were heifers. However, since autumn calving has begun this year, he has had three sets of twins, with two sets of bulls and one bull and heifer pairing.

“The Simmental breed would be prone to having twins. I let the calves creep feed on the better-quality grass before the cows. I’m also planning to out-winter the calves this year on rape,” the Mayo man added. 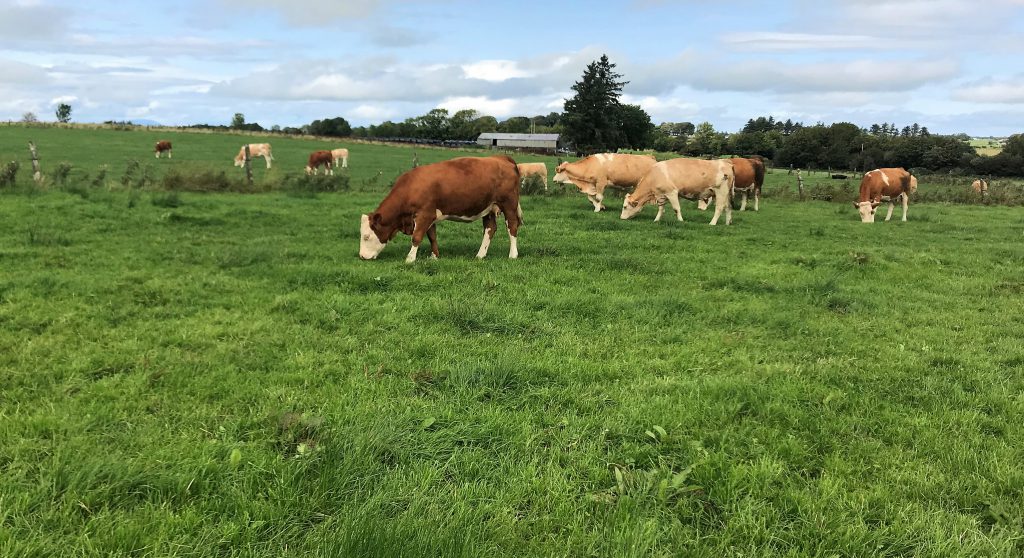 What’s the future for John

Touching on the demise of the suckler cow in rural Ireland, John said: “I don’t think the €200/suckler cow is a good idea. You are paying lads to get into numbers. It will distort everything; there has to be a better way.

“I plan to stay at the sucklers. But you need to be guaranteed a good price for the calf in order to make it viable. You need the €1,000/weanling; even to keep the interest going.

“I try to make extra money on the breeding heifer; that’s why I went down the road of these polled Simmentals,” he added. 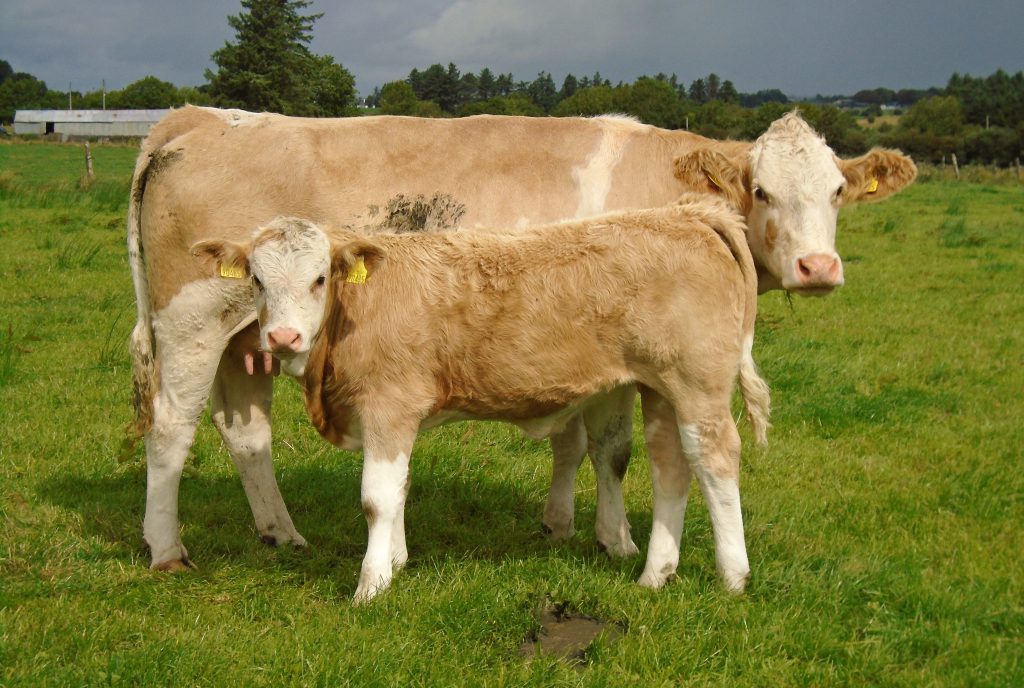 In the future, John has plans to finish some bulls on the farm and sell the better-quality bulls for breeding. However – before this – he will continue his quest to produce his ‘ultimate cow’ and will keep the herd size at 55 cows. 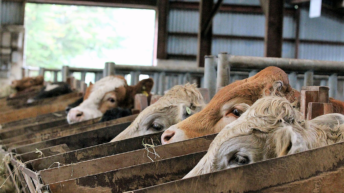 Beef focus: Getting to the heart of Ireland’s progeny testing programme 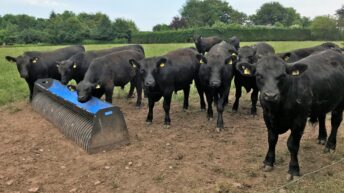