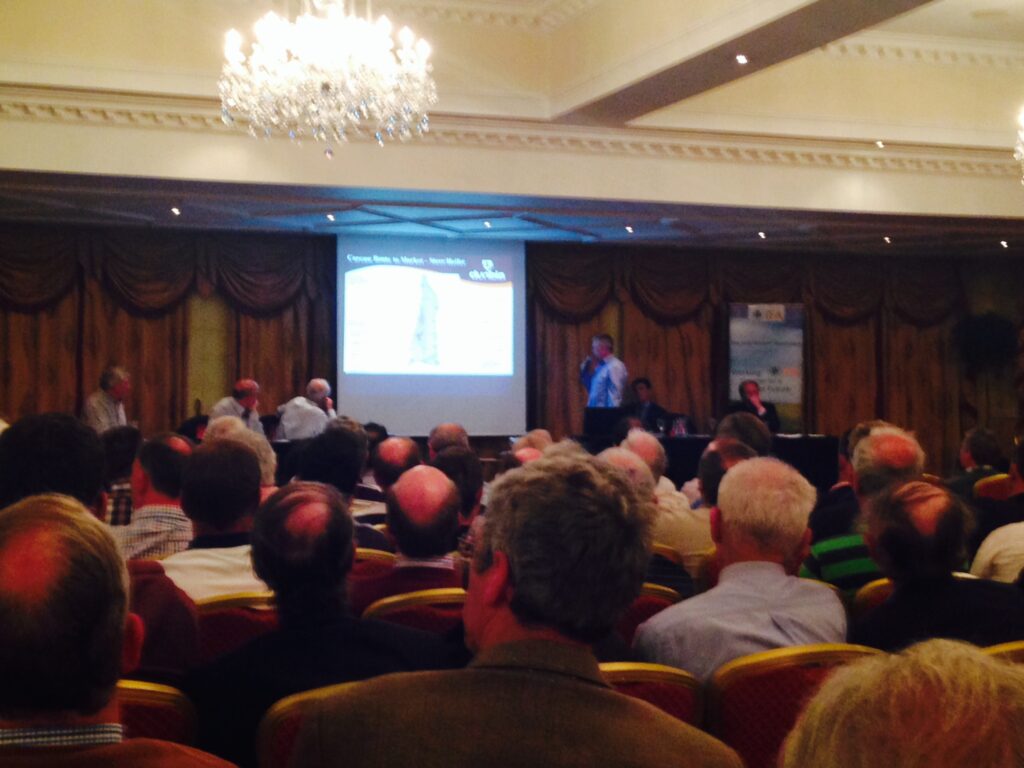 Beef farmers’ anger and frustration is at boiling point, according to IFA President Eddie Downey, who felt some of that tonight’s IFA beef meeting in Navan.

Before the floor objected vocally to Padraig Browne of Dunbia speaking, Eddie called on the Minister for Agriculture, Food and the Marine Simon Coveney and the meat factories to alleviate the price cuts that farmers have experienced in recent months.

“This is the most protracted situation we have ever gone through. As business people we have to look at our industry and decide if we are going to stay at it or not. The severe price cuts we have experienced means that farmers confidence is battered and bruised. Winter finishers in particular have massive bills and they have massive holes in their overdrafts that they have to try fill.”

However, the anger was building during the second presentation of the night from Bord Bia and it erupted when Padraig Browne was asked to speak. “We want action. You never listen to the farmers. The factories are the problem,’ were some of the key messages shouted from the floor tonight. However, Eddie had his supporters too and when order was restored Padraig Browne was allowed to speak.

Eddie said that beef prices in the UK and Northern Ireland, have stabilised and improved, yet Irish prices continue to fall. “These cuts cannot be justified and the factories must do something. We will not allow farmers’ incomes to be decimated. Industries and factories need to realise how angry farmers are. They (factories) have put specification cuts down on top of us and that cannot be allowed to continued. When I came into this job in January cattle prices were €4/kg and I urged the industry to kill more cattle as I knew there was 100,000 more cattle to be killed in the system, and those cattle have now gone through the system and the markets and numbers are now back in balance. We should be seeing as stabilisation of price not a drop in price.

“We asked factories at that time to increase the bull kill and they did that but they have torn up that QPS system. The extra cuts were never part of the QPS system. That agreement must be fully honoured by the factories.”

“But that requires trust…and the place where trust falls down is the manner in which the QPS system has been death with over time. The Minister must address the issues and assert his authority and make the Beef Forum do what was set out to do. The Minster must take a hands on approach on the issues affecting your income.

“That grid, the QPS system, is the contract by which we trade cattle with the meat industry and it has been turn up just because there was an over supply in the system. taking advantage of the oversupply is not acceptable. the suckler herd is too precious and it is no ones interest to damage that suckler herd. We will fully support the QPS and the Bord Bia QA system but the factories must do the same. Cattle prices must reflect market returns.”