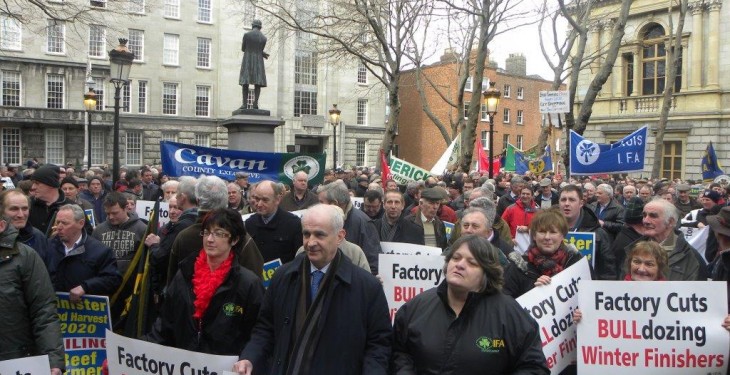 The beef industry is in turmoil with no clear direction on offer to farmers. Ireland is the fifth largest exporter of beef in the world, and beef exports are valued at more than €2 billion. Yet, it’s a sector in crisis and one that needs strong direction and leadership.

It has taken action by the meat factories, under the guise of Meat Industry Ireland, outlining its desired specifications for beef carcasses, to provoke a response from the Minister. In response, the Minister has called for a roundtable discussion, about what he called Ireland’s biggest indigenous industry. It’s a half hearted response to a serious situation.

According to Meat Industry Ireland if the future of the Irish beef industry is to be viable ‘the delivery of a finished carcass specification that meets the majority of customer specifications is critical..’ It goes on to list four key points it deems necessary in the future:

It’s the final point which has riled beef farmers. The ICSA says a maximum carcass weight of 380kg effectively means that processors do not want a beef industry based on continental breeds. Continental breeds are the backbone of the Irish beef herd and if a change in breed direction is what’s best for the industry it would take a massive change of mindset and the stomach does not seem to be there among beef breeders. It’s certainly not a move many will opt for unless the finances stack up.

In October, the Minister announced support measures for beef sector, in the form of a new Beef Genomics Scheme. However, it would seem uptake has been poor. Just yesterday the Minister announced a two-week extension to the scheme. On top of this, only some 34,000 farmers applied to the Beef Data Programme in 2013 – a long way short of the 100,000 farm families involved in beef production.

If the Minister wants to promote the beef industry in Ireland, he will need to take a serious look at the beef sector. Promoting genomics and better breeding is all well and good, but it won’t achieve results unless farmers are getting a viable return from the industry. If prices continue to slide, no amount of indirect supports will drive the industry forward. Money talks and the returns from the processors and retailers have to be there to keep farmers in business.

If the Minister doesn’t want to tackle the processors head on, it’s time he looked at appointing a regulator for the beef industry before the bottom falls completely out our most important indigenous industry. With the average income on cattle rearing farms in the region of €11,000 it won’t take too long to fall.