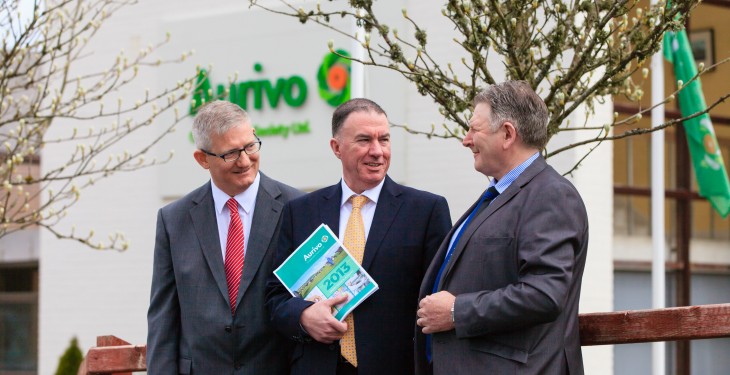 According to Aurivo’s results the Dairy Ingredients business had an excellent year with a record milk volume processed. Sales grew to €125m due to increased demand and stronger milk supply, as well as increased price levels in the market.

Aurivo’s milk suppliers expect to grow supply by 20% after the ending of quotas in April 2015, and the business is well positioned to process the additional volumes. The business has worked extensively with customers to ensure that demand will exist for extra milk supply.

Aurivo’s Consumer Foods business is now a focused dairy operation with a strong market position in liquid milk and butter, where turnover has increased from €40m in 2009 to €75m in 2013.
Aurivo’s butter brands performed exceptionally well with butter sales reaching new records in sales terms, growing by 15% in 2013. This was due in part to a strong investment in promoting the brands through a high profile national advertising campaign. Export opportunities in this area are being actively pursued and the business will continue to invest in key brands domestically, such as Connacht Gold, to underpin its growth.

Aurivo’s Agri business performed strongly with sales of €125m. During the year, transaction numbers rose modestly in Aurivo’s 39 stores and average transaction value grew, both being key measures of customer confidence and retention

Aurivo’s Marts business had a solid year, recording turnover of €84m. Throughput was marginally down against a stronger decline regionally. Over the past number of years, a significant investment programme has been undertaken in the business, and it is intended that investment will be maintained in 2014.

Commenting on the financial results, Aaron Forde, Chief Executive of Aurivo said: “It is gratifying to report on what was a transformational year for the business in terms of both financial and operational performance.”

“The year under review saw a significant improvement in profitability with an operating profit of €5.25m. Group turnover increased by 11% in 2013 to a record €454m. This higher than ever sales figure, generated both in Ireland and internationally across 46 countries, was driven by a combination of added milk volumes in strong dairy markets, increased feed volumes across our Agri business, and a strong performance from investments.

“The results were delivered while reducing net debt by 33% to €12.9m, increasing shareholder funds to €38.7m, and all against a backdrop of paying a record price to milk suppliers during 2013.

“2013 was a year of achievement and progress in the deployment of a strategic model that provides a robust basis for continued growth across our business, and enhanced value to our owners in the in the years ahead. 2014 has started well for Aurivo and I can say with some conviction that we look to future years with renewed confidence.”