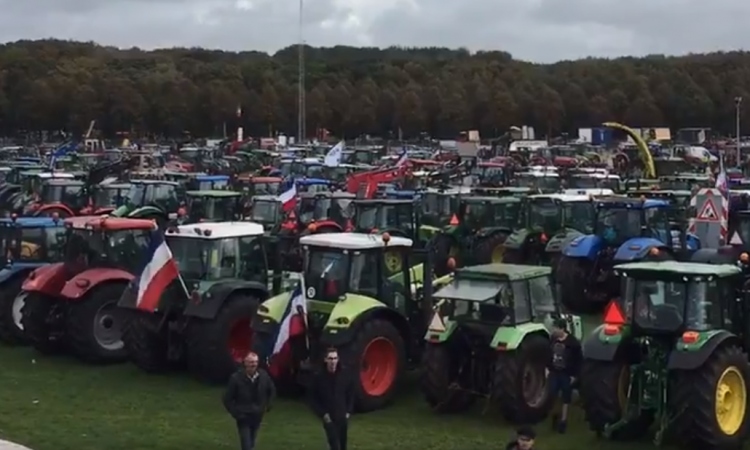 Some 400 tractors have gathered in The Hague – the political capital of the Netherlands – to protest the “negative image” that farmers there say is being spread about them in relation to the environment.

The tractors have this morning, Tuesday, October 1, gathered in a large grass field in the city-centre. According to local news organisation NOS, authorities said they would allow 75 tractors onto the site.

Instead, several hundred showed up, with some tractors driving through police barriers to join the demonstrations, leading to a number of arrests. The protest is being organised by a group calling itself ‘Agractie’, which claims that over 10,000 farmers and 2,200 tractors from all over the Netherlands will take part in the action.

There has been a notable police presence in the city and on the country’s motorways to ensure that things run smoothly; however, that hasn’t prevented unprecedented rush-hour traffic jams around the Netherlands.

Over 1,100km worth of delayed traffic has been reported on roads the tractor conveys are using on their journey.

According to NOS, the protesting farmers are particularly aggrieved by Government polices forcing them to reduce emissions, while other industries, such as aviation, do not face such policies. They are also demanding a change to the country’s general agriculture policy to make it “clearer” in the future.

A number of politicians have appeared at the demonstration site, including controversial right-wing figure Geert Wilders, as well as minister for agriculture Carola Schouten.

Speaking to the crowd, the minister said: “The Netherlands cannot ignore you. I am here to listen to you.

“You work very hard. I know what it’s like to work on a farm. You know what [it] is about […] living with insecurities. I agree that there needs to be more appreciation from society, Government and politics,” minister Schouten added.

“As long as I am a minister, there will be no halving of the herd,” she claimed.

Sheep farmer Bart Kemp, one of the leading figures in organising group Agractie, told the crowd: “It’s about something. It’s about our future, our families, our way of life, our passion […] they want to destroy it with a few strokes of the pen.”

Kemp expressed his concerns over the reports of tractors being driven through police barriers, calling for such behaviour to cease.

It is understood that the politicians who are attending the protest are under heavy security protection.