A man in his 40s crushed by a steel beam on an Armagh farm remains in a critical condition in hospital.

The incident, which happened near to the Moodage Road, Tandragee, on Wednesday (August 12) is understood to have taken place while the farmer was working on a new shed.

A spokesman for the Northern Ireland Ambulance Service said the service received a 999 call at around 5:10pm on Wednesday.

“NIAS despatched one emergency crew to the scene. Following assessment and initial treatment at the scene, one patient was taken to the Royal Victoria Hospital by ambulance,” the spokesman said.

Once in hospital, the injured man was put into an induced coma, where he is being treated for multiple injuries.

Speaking to AgriLand today (Monday, August 17), a spokesman for Belfast Health and Social Care Trust said the man remains in a “critical” condition.

DUP MLA William Irwin, who knows the farmer, said he hoped he would make a “full and speedy recovery”.

My thoughts and prayers are with his family; this is a very traumatic time for them.

“He is a typical hard-working family man and I hope and pray he makes a full and speedy recovery.” 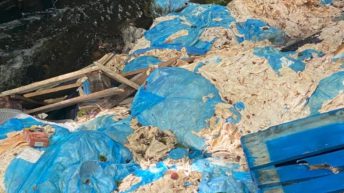