A status yellow rainfall warning has been issued for Leinster counties and parts of Munster, by Met Eireann.

According to Met Eireann, there will be 25 to 35mm of rain today and there’s a risk of up to 40mm along parts of the south coast.

The warning is in place until nine o’clock tonight (Thursday).

Met Eireann has also issued a status yellow wind warning for the country from today (Thursday) until noon on Saturday.

There will be southwesterly winds of 45 km/h to 65 km/h with gusts up to 100 km/h on Friday and Saturday, it said.

Winds will peak on Friday evening and night with potential for stronger winds for a time in northwestern coastal counties. 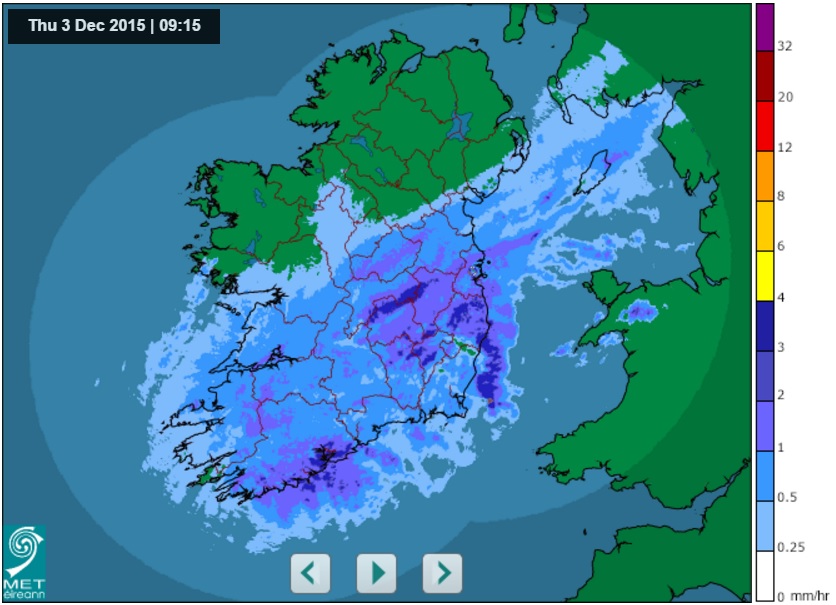 Rainfall levels at 9.15am this morning

Rain will be heavy for much of the time today and there’ll be a risk of localised flooding, it said. It will fall as sleet in places in the afternoon and evening, Met Eireann said.

Connacht and Ulster will have small amounts of rain and the northwest will be mainly dry and there will be highest temperatures of 7 or 8 degrees Celsius and becoming very cold in the afternoon, it said.

Met Eireann has said that tonight (Thursday) rain will clear eastwards early in the night and most places will be dry but scattered showers will develop in the west.

It will be cold with lowest temperatures of 0 to 4 degrees and frost will develop in places, especially in the east.

It will clear by morning as south to southwest winds freshen, it said.

Looking to tomorrow (Friday) much of the day will be mainly dry however, it said heavy rain will develop in the west and northwest in the late afternoon and then spread eastwards.

It will become very windy in the afternoon, evening and night with strong to gale force southerly winds and severe gusts, especially in coastal areas, it said.

There will be highest temperatures of 10 to 12 degrees on Friday, Met Eireann has said.