Agri Aware highlights the benefits of CAP in new campaign 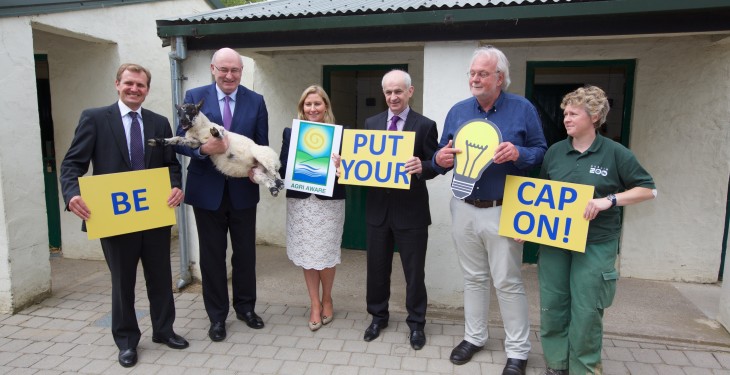 A campaign to communicate the Common Agricultural Policy (CAP) to the general public and farmers, across the island has been launched by EU Agricultural Commissioner Phil Hogan.

‘Be Agri Aware – Put your thinking CAP on!’ was launched at Family Farm at Dublin Zoo and it will be delivered by Agri Aware; the independent Irish agri-food educational body.

Aimed at farmers across Ireland and Northern Ireland, the message is that CAP delivers safe, quality and traceable food that is affordable for consumers, in addition to the highest animal welfare and environmental standards and clean rivers and lakes.

The campaign will encompass a year-long programme of communication initiatives and events, including advertisements in cinemas and on national television, billboards and radio and newspaper adverts, among others, it says.

One of the elements of the campaign is ‘Meet the Farmer in the City’ at Family Farm, which has over 1m annual visitors.

Agri Aware’s farmers will be the resident farmers in Family Farm, during weekends in June, July and August.

These farmers will represent a number of different sectors within the farming community and they will speak to the visiting public about farming, the importance of the agri-food industry and CAP during tours of Family Farm, it says.

Agri Aware has also recruited two young farmers to work in Family Farm at Dublin Zoo over the peak summer months, to interact with visitors and organise engaging activities to communicate the CAP after 2013.

Speaking at the launch Commissioner Phil Hogan said Agri Aware has an excellent and proven record in communication.

The new CAP is complex and I welcome every effort to clearly explain and simplify the understanding of the CAP.

“Agri Aware won one of the top prizes in the CAP Communications Award in 2012 and I am particularly pleased that they will be a beneficiary of grant support from the European Commission this year, which I’m sure will help with this latest CAP communications initiative,” he said.

Agri Aware’s Chairman, Richard Moeran said that their message will be crystal clear; CAP delivers safe, quality and traceable food, that is affordable to the consumer.