Regional information meetings are set to be held for livestock farmers on the €100 million beef fund by the Irish Farmers’ Association (IFA).

Commenting ahead of the events, IFA president Joe Healy said: “The IFA is holding eight information meetings across the country in the month of June to update farmers on the €100 million Brexit Beef Fund and to hear views on its distribution.”

Healy said a meeting of the IFA National Council in Dublin today, Tuesday, May 28, endorsed the National Livestock Committee policy direction that the €100 million Brexit Beef Fund should be targeted at beef finishers of prime cattle – steers, heifers and young bulls – and suckler cow farmers. 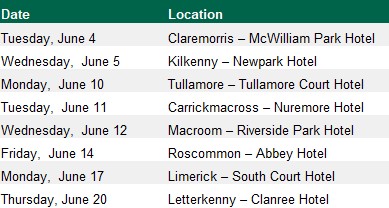 The president added: “It is essential that the €100 million Brexit beef package is targeted to the farmers who need it most.

“It’s for farmers – not for factories, agents or dealers. We will insist it is paid quickly and directly to farmers.

“It must take account of the farmers who incurred the beef price losses and the income situation.”

IFA National Livestock chairman Angus Woods said it is very clear that the farmers who sold prime finished cattle since last September and suckler producers are the two groups who were hit the hardest.

The IFA has already met with European Commission officials on the details of the €100 million package, which Woods said was essential for winter finishers given the horrendous losses they have taken.

Woods said under no circumstances can Minister Creed allow one cent to go to factory-owned cattle or factory feedlot cattle.

“Farmers who sold finished cattle through the marts must be eligible, and not agents and dealers. The Department of Agriculture has all the data and information on the AIMS system,” he said.

Top-up payment for farmers under 40 urged under beef package