68% of beef farmers have not tested for liver fluke recently, says study

With a high risk of liver fluke due to the wet summer and extended autumn grazing season, 68% of farmers have not recently tested for liver fluke, a survey by Norbrook has found.

Norbrook recently conducted a survey of beef farmers in the UK and Ireland to get further insight into current fluke treatment practices.

The survey also highlighted that only 17% had tested within the four months prior to the survey, which was undertaken in November 2015.

43% of respondents said they were more concerned about liver fluke this year compared to previous years.

Furthermore, of those who were monitoring their fluke status, 32% did so solely by reviewing liver condemnations from their abattoir; 29% had carried out faecal egg counts, and 12% took blood samples.

Another 22% said they had tested but weren’t aware how. 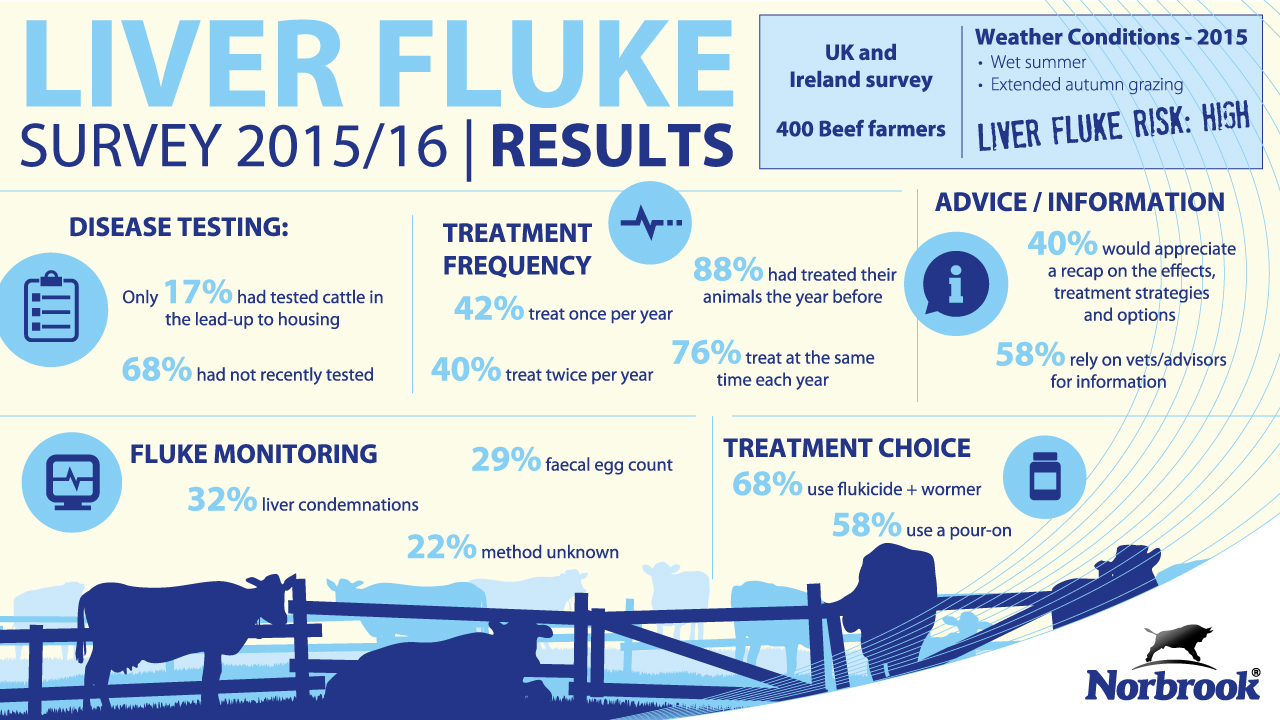 Maura Langan MVB, Veterinary Advisor for Norbrook, said that it would appear that there still is a need for continued education on fluke symptoms, testing mechanisms and treatment in the marketplace with 40% of farmers saying they would appreciate a recap on the effects, treatment strategies and options.

“There are however, a number of positives coming out of the results particularly around treatment practices.

The vast majority of respondents treat cattle once (42%) or twice (40%) a year for fluke with 88% treating for fluke in the last year.

“This is important because treatment can be necessary in the summer after turnout and again in the winter once housed, depending on individual farm circumstances.

“The survey also highlighted that 76% of farmers treated their herds at the same time each year, which may not necessarily be the correct thing to do, as weather conditions can move the key liver fluke season to different months of the year in different parts of the country.”

The survey found that 68% of farmers prefer a combination of a flukicide and a wormer, and 58% specifying pour-on as their preferred method of treatment.

“At Norbrook, we believe that a wide range of industry stakeholders have a role to play in helping farmers to firstly understand the implications of fluke in their animals, how to test for it and finally if necessary, when and how to treat the animal with appropriate active ingredients at the appropriate time of year.”

The survey was conducted online with a prize of £250/€330 retail vouchers on offer for all participants completing the survey and being entered into a prize draw.

The winner was Hugh Dwyer from Kerry, Ireland.